We were confused, to say the least, when we stumbled upon a painting of President Barack Obama, naked and lovingly entwined with the body of a unicorn. It was inexplicable; it was irreverent; it was glorious; it was weird.

Our interest only intensified when we visited the website of artist Dan Lacey, a self-proclaimed "Painter of Pancakes." The majority of his paintings involve public figures from Hillary Clinton to Manti Te'o, all adorned with the traditional American breakfast option. We reached out to Lacey to learn more about his life and work. During his stay in the hospital while recovering from food poisoning, Lacey shared his unexpected journey from being a Christian conservative cartoonist to an almighty painter of pancakes. Scroll down to see a slideshow of his work. 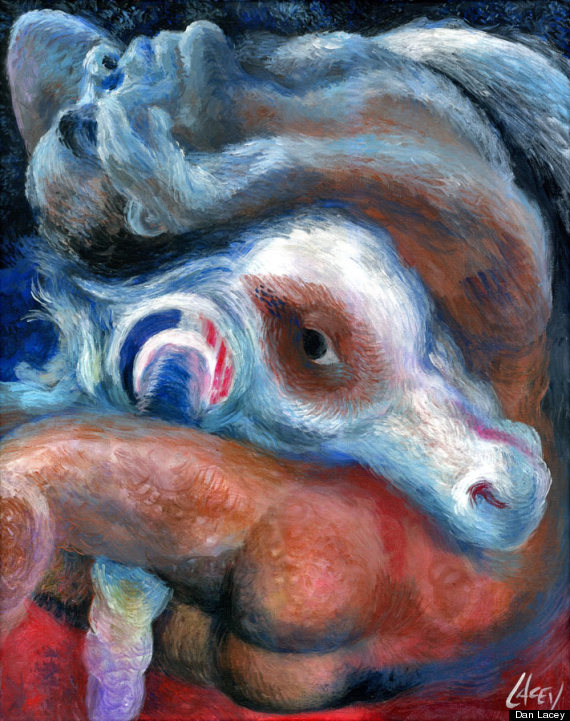 HP: You have some new paintings up on your website today. Are you painting in the hospital?

DL: I painted a couple of things. I just finished a kitty cat dressed as a nurse. My real nurse recommended that I put a white hat on the cat, so people would know it is a nurse. But that is very stereotypical, so I made a pancake as a hat on the cat instead. It also wears a cross made of butter; it helps viewers understand it's a nurse-cat. The pancake hat works on a third level: you bypass the stereotype, but it helps the eye to recognize.

HP: How did you become obsessed with pancakes?

DL: I started out drawing a comic called Faith Mouse, which were Christian cartoons on the Internet -- Christian conservative cartoons. I had a lot of fans and I also had a lot of detractors because of my views. The comic was very political at the time. I started having problems with my faith and they, both my fans and detractors, didn't know it. So I started to expand the cartoon and take more liberties with it, and the people who didn't like the cartoon said, "Damn, Lacey is going crazy. He's really lost it." Finally, I gave up cartoons in favor of painting.

HP: So you were a conservative Christian?

DL: I was, yes. I am sort of a Catholic with no political leaning right now. I sort of remember myself like before, but then also I don't.

HP: And the pancakes?

DL: Yes, there was a fellow in Japan who trained his pet bunny rabbit named Oolong to balance food items on his head. One of the things he balanced were dorayaki, Japanese pancakes that hold bean paste. The image of this rabbit balancing the pancake became an Internet meme for I don't know what you're talking about. People would say, I don't have a response so here is a rabbit balancing a pancake on its head.

So, I took political figures and put pancakes on their heads. People saw that and said "Dan Lacey is the coolest person in the universe because he's turning on his political right wing roots." All of the art is in some way related to me; I know in some ways that is kind of selfish, but I think about myself quite a bit. The pancake was perfect because it represented nonsense, it represented self-created context. I latched onto it because it was a symbol but still open to interpretation. I still do the pancake, and the meaning of it varies, but it has to do with awareness of oneself. It's also obviously a gimmick. 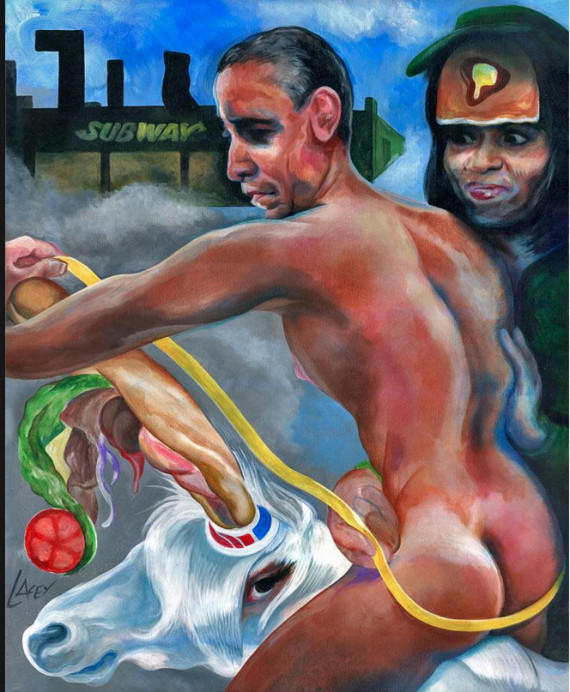 DL: Normally I do a couple of them a day. Almost everything I do is sold on eBay and I do take commissions as well. I put things for sale up on eBay and the prices vary wildly; I had one go for $7.50 and one for over $1,000.

HP: Which one was the highest price?

DL: The Obama and the dead Twinkie; it was about my cat that died. Some male kitties are sweethearts and they are like dogs. They are like doggy kitties. Female cats can be a bit more skittish. The big Twinkie represents my cat Marco, just his dead body. I also made it when Twinkies were being discontinued, so it represented the sadness of people that were going to lose their Twinkies. That one really hit, it really struck people.

DL: A lof of my Obama works address him as this messiah figure, and the loss of Christ, that's there too. I also just really enjoy painting nudes. Some people would consider them pornographic, I see them as sensual. I think a lot of personal motivation is sexually motivated. When you think about it, you have intercourse with people just through speaking with them, and the natural culmination of two people talking would be two people coming together as one. Somewhere in the center of that is sex, and the high end of that is to be one with god, one with the eternal. I am not ashamed of sexual feelings.

HP: What are your personal opinions about Obama?

DL: I like him; I've never been an Obama hater. People tend to ask is my work pro-Obama or anti-Obama, but it's really neither. My works are more about the messiah figure, about the person that can save you. I think we put a lot of attention on our president, and Obama is unique -- people really have invested their hearts in him. When you have the naked sensual pictures of Obama, that's probably me. That's me expressing my sexuality and how I feel about sex.

Check out Lacey's unusual political artworks in the slideshow below and let us know what you think!