There are legions of activists at work in our nation of over 300 million people, the vast majority of whom receive scant or no attention over the course of their lives. Some would like the attention but can't get it, while others shun it, preferring to work outside the glare of the media and celebrity. All types are needed to play the inside and outside political game and navigate the long, deliberate and often agonizingly slow process of educating the masses on their cause. I'd like to believe that the horizon of equality has been seriously telescoped, as the time from Seneca Falls to Selma was 117 years, and the time from Stonewall to today is one-third as much. But even 44 years is a long time, so I'd like to introduce you today to one of those quiet warriors of the past 44 years, Dan Massey, who passed away last week at the age of 70.

I have a hard time thinking of Dan as separate from his partner and wife, Alison Gardner. More than most coupes, they truly complemented one another, working synergistically to fulfill their mission. The culmination of their life's work, a book on the connection of sex, gender and spirituality, was recently completed. To outsiders Dan was the heavyweight intellectual of the couple, brooding in the background and writing manifestos while leaving the socializing to Alison. Knowing them well, however, I could sense that although there was a division of labor in many cases, they functioned far more often as a unit than not. It's hard to imagine Ali managing without him, but their profound spiritual beliefs allow her to keep him close by even now. I envy her that comfort.

Dan was a true intellectual thinker, a graduate of Harvard and MIT, a world expert in information technology, including artificial intelligence, mathematical linguistics, experimental psychology and metamathematics. 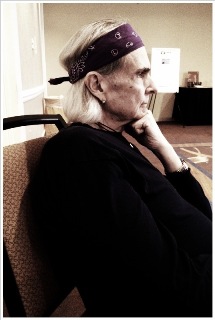 There were times when I could picture this self-described queer fighter for sexual freedom sitting around a conference table with Frege, Hilbert, Gödel, Russell and Quine. I imagine that they would have been quite cool with him, and -- who knows? -- they might have even been willing to contribute to Sen. Baldwin's campaign at one of the many fundraisers that Dan and Alison hosted in their D.C. penthouse for the candidates and causes in which they believed.

Most important, however, was Dan's passionate advocacy over the years in support of social justice for all. Never afraid to be in the avant-garde, Dan and Alison were early and fervent supporters of the trans community in the D.C. region. Serving as a home base, feeding the troops, engaging in debate and never failing to keep the ball moving forward, they exemplify the meaning of the word "persevere." I think I know why President Obama used the word twice in his Barnard commencement address: He was thinking of couples like Dan and Alison and the others whom they've inspired. They are what community organizing is all about.

However, what separates them both from other activists for me was their willingness to be critical of movement leaders when they felt that the proper change was not being effected. All movements, and particularly those that spawn bureaucracies, have a tendency toward ossification. Dan often spoke his mind, in a respectful but firm manner, and somehow was able to stay actively in the mix. Many activists are quick to take offense, but Dan and Ali were able to push the envelope and survive the internecine wars in our community. Maybe it's because they were primarily accountable to their own immovable sense of equality rather than to any organization or person. And though they often had strong opinions and tried to proselytize when opportunities arose, they never demanded compliance and always left people room to be themselves and maintain their friendship.

They had a remarkable circle of friends, the kind about whom biographers often write when telling the life story of colorful historical figures. I was honored to be in attendance at Dan's surprise 70th birthday party five weeks ago, when he seemed a little rundown but was truly amazed to see his close friends turn out for this milestone. It was the best gift that Alison and their lovely children, Tiye and Ross, could have given him. Dan, a man who did not suffer fools or doctors, and particularly not foolish doctors, kept his own counsel on his health. By the time we discovered that he was terminally ill, there wasn't any pain or suffering. It seems fitting that he left this world as he had lived in it: doing it "his way, all the way."

We will miss you, Dan. May you rest in peace.