Crime fiction is a crowded genre filled with rehashes, imitations, and book series that never seem to end despite the familiarity of plots from one entry to the next, and for that reason, I tend to stay away from them. As I write this, I am staring at the first sentence of Dan Smith's new novel, The Darkest Heart, which wrapped me up and held me until the final page. 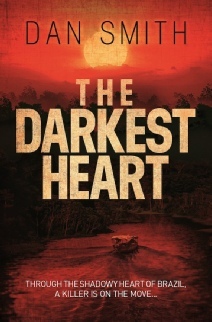 "There were times I felt I would always be death's passenger."

And so began the furious flipping of pages over the course of one frantic reading session that was supposed to end after "just one more chapter" on more than one or two occasions. Adopting the movie like quality of snappy chapters that are rarely over a half dozen pages, always ending on a suspenseful note that begs the readers to proceed many hours after the sun has set outside their bedroom windows.

Dan Smith lived an adventurous childhood, seeing more of the world before he was an adult than most people see throughout their whole lives. From Sierra Leone to Sumatra to Spain and the Soviet Union, Smith has seen it all, but his time spent living in central and northern Brazil gave him the tools to pen The Darkest Heart.

Set in the underbelly of Brazil, we are introduced to a hit man that is just trying to get his life together, but the people surrounding Zico are doing everything in their power to dissuade a turnaround.

All is well when Zico meets Daniella, and he forms a connection with boat transport operator until these new found normal parts to his life lead to his involvement with an assassination attempt on a activist, Sister Delores Beckett. Venturing off to murder a nun is not a good idea for a man that is looking to redeem his past ways.

Smith weaves a love story into an action packed thriller with a superb cast of villains that circle around Zico, trapping him in not just the literal jungle of Brazil, but the metaphorical jungle that is his life. This is where the novel succeeds where other thrillers fail, because Smith balances action with the contemplative nature of the human mind and the moral ambiguities that arise when there seems to be no other choice but to do the wrong thing.

His prose is sound and the dialogue between characters is genuine, and Smith does a fantastic job of representing the consequences of his characters' actions while maintaining a plot that never steps off the pedal.

Dan Smith lacks the household name or a large body of work, but what he has is more important in at least a literary standpoint. He uses the standard conventions of crime fiction, mysteries and thrillers but he implements an aspect of more literary works by giving readers complicated characters with interesting thoughts that is utterly refreshing in a genre that frequently features cookie cutter, paper thin casts that are solely there to drive the plot forward. The Darkest Heart is a thriller with a satisfying climax, but its defining feature is its ability to provoke thoughts and reflection about its themes instead of just quickly moving on to the next formulaic best-selling crime novel from the usual suspects.