Twice in his professional career, Dan Wheldon has won over a million dollars in a single race.

Sunday afternoon, the 33-year old native of Emberton, U.K. will get a chance to double down for a megabucks payday, and this time he gets to bring a lucky fan along for the ride.

Figuratively speaking, of course, not in a modded IndyCar taxi cab.

Wheldon will start from the back of the record 34-car grid at the IZOD IndyCar World Championships at Las Vegas Motor Speedway. But if he makes it to the front for the checkered flag, Wheldon and Ann Babenco of High Bridge, N.J. will split the $5 million dollar GoDaddy Challenge grand prize. 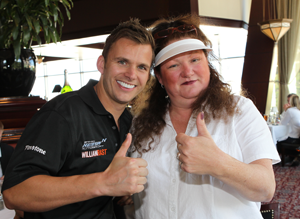 "I've done some things in my career that have been cool, but I've never made someone an instant millionaire before," Wheldon said. "Honestly, though, I do feel I have a genuine shot to win the race."

The last time Wheldon made such a bold proclamation, it was at a press conference in his adopted home of St. Petersburg, Florida and practice for the 2011 Indy 500 was still two months away. The 2005 IndyCar champ had found himself inexplicably unemployed at the beginning of the season after an acrimonious split from the front-running Panther Racing outfit, where he had been bridesmaid in both the 2009 and 2010 Indy 500 races.

At the season opener in Florida, the affable Englishman announced a deal with the microscopic Bryan Herta Autosport team for the 2011 Indy 500, a team that had barely squeaked into the 33rd and final slot on the starting grid of the previous year's race. The mismatch of big-money talent with a hardscrabble, small-budget team owned by a recently-retired driver left pundits scratching their heads.

"Call me crazy, but I've known Bryan Herta for a long time; both as a teammate and a friend. I knew he would do everything in his power to give me a fast car," Wheldon said. "I was comfortable and confident in the decision that I had made. It was a case of the race playing out for us, perhaps differently than some others might have planned."

It was also different than any race in the illustrious hundred-year history of the hallowed Indianapolis Motor Speedway. On the final lap of the 2011 Indy 500. Rookie race leader J.R. Hildebrand of Panther Racing, who had replaced Wheldon in the Panther Racing National Guard car, misjudged a pass and planted his machine in the turn four outside wall a few hundred feet from the finish line. Wheldon slipped by the sliding and mangled Hildebrand car for an improbable and virtually impossible, victory. The resulting highlights of the beaming Wheldon and the distraught Hildebrand bounced off satellites and into the sports highlight reels across the globe.

"Obviously you dream about winning the race, but I can't say that I realistically thought that was how it would happen," Herta said. "Dan did though. I don't know where he found the inner fortitude, and strength and belief in us. But he believed in us so much he made us believe in ourselves... (that's why) you put a gunfighter in the cockpit."

But by the next weekend, despite fielding calls from several interested teams, Wheldon returned to the sidelines. He remained loyal to Herta and joined the Versus IndyCar announcing team as a color commentator, while spending time with his growing family that had added son Oliver to the older Sebastian in March. He also got the honor of being named the official test driver of the new 2012 Dallara IndyCar. Despite the activity and accolades for the fresh perspective Wheldon brought to the broadcast booth, the competitive fires burned inside every time he heard the cars go hot.

IndyCar series CEO Randy Bernard introduced the $5 million GoDaddy Challenge as the piece de resistance to the Vegas championship weekend. What Bernard envisioned was luring some of the top names from racing such as Formula 1 and NASCAR with the bounty. The unspoken understanding was that any driver arriving cold from another form of racing would undoubtedly have their butt kicked by the IndyCar elite, and possibly drop a spinning newbie smack into the middle of the series' championship race.

But when X-Games and motocross hotshoe Travis Pastrana dropped out with an injury, and NASCAR superstar Kasey Kahne was blocked from participating, Bernard retooled the idea. Wheldon, starting at the back of a record-breaking 34 IndyCar World Championships field, would have a chance to make the dash for the cash if he could beat everyone else to the finish line, with a fan drawn from an online contest to share the bounty.

It was precisely the sort of bold marketing stroke IndyCar, facing the defection of top personality Danica Patrick to NASCAR, seemed to need to finish the 2011 campaign, Wheldon, who can rattle off sponsors' names without pause in a lilt that makes him sound like the younger brother of the GEICO chameleon and was once a top karting rival of F1 superstar Jenson Button, fits the bill in terms of both personality and talent.

"Randy didn't pick me because he likes me personally, he picked me because of the media I generated from the Indy win," Wheldon confirmed. "I'm not naive where I think my brand is bigger than Travis Pastrana's, but I move the needle in a different way, so to speak. And the other drivers respect me and trust me to be out there."

Trust is a big issue in a close-drafting pack of cars at 215 mph, and even bigger when the IndyCar championship is on the line. The Vegas track has not been raced by the current configuration of Indy car, but figures to be wide open like the tracks in Chicago and Kentucky that traditionally provided some of the closest finishes in series' history.

And perhaps no driver is better qualified to deliver the goods in the current Dallara/Honda IndyCar debut on the 1.5 mile Vegas oval. Wheldon has won nine times on mile-and-a-half ovals including three times at Kansas and twice in Chicago.

Still, the betting line for Wheldon (15:1) is behind the duo of championship contenders Dario Franchitti (9:5) and Will Power (2:1) After all, he does have 33 cars in front of him with the same goal.

And there is a fan from New Jersey with two and a half million reasons to hope that Wheldon comes through.