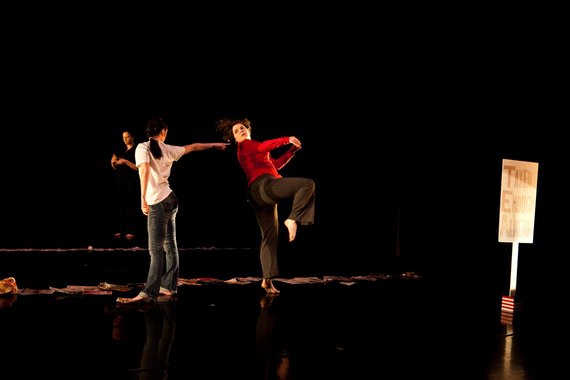 They'll tell you it's hard as hell to financially operate a mid-level dance company.

Over the last two decades, public funding for the arts has dried up, been tapped out, and fought for with all the fervor of the Tributes vying for lifeblood at the Cornucopia in The Hunger Games. Mind you, not that there has ever been that much public funding in the U.S. to begin with compared to certain other countries.

I've written before about the absurd idea that cutting arts funding does anything to curb national deficit spending, despite Mitt Romney's stated desire to pull the plug on Big Bird. Regardless, we are seeing less and less public money available for artists. From "Public Funding for the Arts: 2012 Update" study from Grantmakers In The Arts:

"In addition to exhibiting reductions in aggregate terms, public funding for the arts has not kept pace with the cost of doing business. When adjusted for inflation, total government funding for the arts has contracted by 31 percent since 1992; congressional appropriations to the NEA declined by an inflation-adjusted 49 percent between 1992 and 2012. State funding declined by 25 percent and local funding declined by 28 percent during that same period."

So, what does that economic mumbo-jumbo mean? Less money, mo' problems.

What happens when dance companies aren't able to secure funding? They aren't able to pay their dancers and staff at fair wage, production value goes down, and performances occur less often. Smaller companies may simply devolve into independent choreographic projects, potentially stifling the growth of the next generation of great choreographers. Instead of spending time in the studio creating work, independent choreographers and company directors alike find themselves swimming in stacks of grant applications and navigating the world of crowdfunding campaigns in order to scrape together enough money for a production.

"But capitalism!" you cry. "If your product is good enough, enough people will show up and your revenue will cover your costs! Math!" Good try, I say. But in order for a company to break even on a production, ticket prices would skyrocket. Dancer pay, venue rental, designer pay and equipment, marketing costs -- they don't come cheap. And if they do come cheap, they look cheap and that is a complete disservice to the dancemaker's work. Company directors are so concerned that people won't pay a certain price for a dance performance, not because it's not worth the dollar amount, but because there is a culture of underselling ourselves in the name of making dance accessible.

Another reason dance struggles to survive in a country that fetishizes capitalism is that dance is difficult to commodify. It can't be packaged and sold on a shelf or shipped overseas. It can be recorded on video, but the crucial experience of live performance is absolutely lost in translation. Television shows such as Dance Moms, So You Think You Can Dance, and Breaking Pointe are selling the entertainment of competition (as a raison d'être as a program as well as scripted competitive relationships "behind the scenes") and the popular phenomenon of reality TV drama. They also have commercial breaks that garner ad revenue. Concert dance doesn't work like that. Nor, many would say, should it.

"Still," you might say, "why should my tax dollars go towards your little art project?" Ignoring your condescending tone for a second, let's look at some actual math. It is well documented that dance and the arts generate revenue for local economies. They tap into tourists' pockets and add a caché of culture and sophistication to a city. The performing arts also create jobs. And I don't mean just the jobs of dancemakers and performers. The technical crew, the artistic collaborators, the venues, the technical equipment rentals or purchases, the restaurant down the street from the venue, even the taxi driver that got you to a performance. Those are all real jobs from which people take home a paycheck and go on to spend buying groceries or clothes.

According to the most recent data from the fourth edition of Arts & Economic Prosperity, "the nonprofit arts and culture industry actually generated $135.2 billion in economic activity and supported nearly 4 million full-time jobs in 2010. It also generated $22.3 billion in local, state and federal revenue." That's not peanuts. In the same year (2010), the National Endowment for the Arts received approximately $160 million in appropriations. That's what I'd call a damn good return on investment.

Now don't get it twisted. I'm not advocating for dance being solely publicly funded. Total funding from a government entity can mean total control of the "market." This would shut out a lot of experimental and provocative work and tilt the field in a more conservative direction. As it is, the most well-funded companies are beholden to their sponsors both public and private, and it is often risky to do anything but toe the line of aesthetic and choreographic precedence.

Ideally, dance companies would make enough revenue to completely cover their own costs of production, but before that can even begin to happen, we need a drastic paradigm shift. As a society, we need to question whether or not we want dance and art to survive. If we decide that we do, we need to stop treating dance and art like side projects, and recognize them for the occupations they are that deserve public funding just as much as many other sectors. Artwork is work.

Dance has a deep and rich American history. Dance has been used as a tool in education and diplomacy, and yes, as a source of entertainment. Asking for public funding is not asking for a handout. It is asking for validation that dance has a place in our culture and society worth preserving. So the question is: Does it?

Share your thoughts and opinions in the comments below.