A blanket of dismal expectancy shrouds every new festival or high profile EDM show. It arrives in the form of a vulture; a hovering media presence eyeing any opportunity to snatch up crumbs of information to then fabricate wildly alarming headlines and instigate "conversations" where dance music culture and its fans are berated, over and over again.

An article titled "Festival Deaths on the Rise in the EDM World" graced Billboard's most recent August edition -- a piece filled with one liners plucked from headlines about deaths and conveniently devoid of citations that finished off with flair thanks to an anonymous "concert industry insider" quote: "If you have 50,000 people for four days at an EDM festival dropping a lot of ecstasy, you're going to net out at the end with someone not surviving it. That's just math."

During a segment of ABC News' coverage of several drug-related deaths that occurred at New York-based dance music event Electric Zoo in 2013, an unnamed expert was invited on air to contribute his insightful two cents: "They believe [drugs are] not harmful or addictive and that there aren't any adverse side effects."

One word to capture the essence of the hundreds of thousands of fans all across the globe that put aside their daytime jobs to scale financial and physical boundaries in order to attend numerous music festivals and shows for the love of the music and the experience. A continuously growing collection of music fanatics that have spurred an estimated $6 billion dollar industry -- but with one statement, an entire population has been categorized as a bunch of naive, uneducated drugged out party kids with no concern for our lives and our futures.

It would be irresponsible to claim that drug use isn't prevalent in club and dance culture, and equally foolish to turn a blind eye to the sizable population of careless party goers that do fall into the stereotyped vision of the modern day EDM fan. The unfortunate reality is that they are out there, and every so often, whether the result of negligent partying or just a stroke of bad luck, one person's story ends too soon. But unlike Billboard's inauspicious choice to represent industry leaders as inattentive folk who are just peachy with accepting that "someone just won't survive," EDM powerhouses like Pasquale Rotella, the mind behind the Electric Daisy Carnival brand and Robert Sillerman, founder of SFX and acquirer of ID&T that runs Tomorrowland and Mysteryland contribute countless hours and months of detailed planning to not only ensure that each show is more dazzling than the next, but also to guarantee each attendee will have the best experience possible. Better yet, talk to any dance music fan and they'll tell you themselves: There's more than just one personality in the pool of EDM enthusiasts. 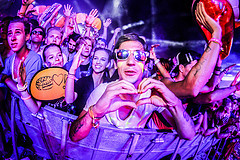 I imagine that an outsider looking into the tight-knit, diverse community of dance music could have a hard time understanding. Where ravers see music that sparks emotions, an older, traditional journalist sees bug-eyed kids bobbing to repetitive robot music. Where some find a fun, non-judgmental space to express oneself, the same reporter sees scantily clad young girls in alien attire and a druggie tweaking out in the form of bizarre dance moves.

Earlier this month when news began to spread about another bout of hospitalizations and arrests at a concert, people were reminded of the many headlines they'd seen before. "House of Blues cancels Zedd show after overdoses, death," and "Dozens hospitalized at Avicii concert in Boston," all too fresh in their memories. Dance music breathed a collective sigh of relief when it was revealed that the 55 people arrested and 22 hospitalized were actually in attendance at a Keith Urban country concert. But when I plugged in searches to YouTube with lines like "Keith Urban arrests and hospitalization news" or "22 hospitalized at Keith Urban," the most newsworthy videos that appeared were clips from entertainment channels reporting on the latest relationship and wardrobe updates from Keith Urban and Nicole Kidman.

An incident of such large, concerning scale that the Mansfield, Massachusetts Fire Department declared it a "Mass Casualty" in order to enlist surrounding areas to aid in assisting with people in need of care, but not one major channel news clip featuring experts lecturing on the dangers of excessive alcohol consumption or anchors sparking the discussion on why country music is dangerous. More recent reports have even shed light on an alleged rape that happened at the concert -- within bounds of the venue with attendees nearby watching -- but still. Nothing.

And this isn't a pattern that is only isolated to the U.S. Just earlier this summer, Dutch DJ superstar Hardwell landed in Belfast, Ireland to play a headlining show to an audience of 10,000 ticket buyers. Following the DJ's performance, the show received major European media attention highlighting attendees treated for effects of alcohol "and in some cases, drug use." BBC News compared it to a "disaster zone" and the Northern Ireland Ambulance Service cited the scene as a "major incident," causing Hardwell's following show in Edinburgh to be cancelled.

Reading closer, the article states that only three out of 17 people hospitalized came from inside the show venue, and only three people were arrested with "a small quantity of drugs." I'm no math whiz, but out of 10,000 attendees, those statistics don't sound like a scene of chaos and calamity to me. Not to mention that VICE named Belfast as the "European Capitol of Terrorism," where car bombs are only some of the results of a modern-day war between Protestants and Catholics. Yet the media still considers dance music "controversy" as more tempting bait to lure in guileless readers.

Assuming the best of public media, I can visualize the way they see the culture: a workspace board counting down how many safe days EDM has had since its last accident, but the counter never goes past double digits. On a personal level, I like to romanticize that it is concern that fuels the incessant shade constantly thrown at dance music, perhaps specifically concern for the "kids," the generally young demographic of EDM fans that could easily be the age of their own children. But I could be wrong.

It boils down to responsibility -- the media is searching for someone to blame, and it is far easier to single out one than target a diverse crowd. Sometimes, the finger points to whoever stands underneath the spotlight at the center of the stage, but now, outlets have found solace in grouping an eclectic array of hundreds of thousands of different people into one figure -- "they." 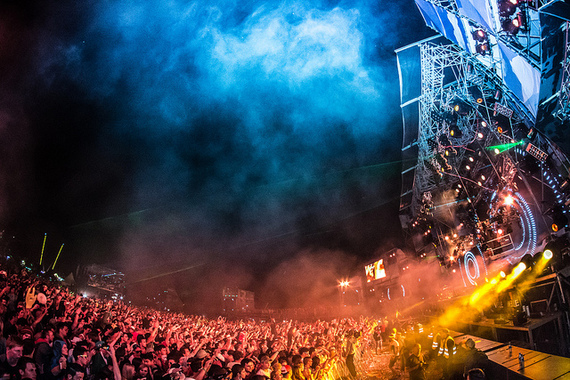 Until the population is willing to fully understand the complex layers of dance culture -- including the various subgenres of music and the wide range of real people that make up its fans -- an insta-fix solution to changing the media's perspective of our community will remain just out of reach. That's not to say that nothing can be done -- it begins from the inside out. As frustrating and hard to understand as it may be, it's unavoidable that every individual in a crowd of hundreds of thousands needs to be responsible and understand that everyone represents the "dance music fan" for all.

The silver lining of the media situation is that people care about dance music now, and they care with a fiery passion. The phenomenon that is EDM has been given a unique chance to break through the overbearing and negative shell and instead, give the media something promising to care about. A fortune cookie, or Ghandi, or someone on the Internet once said, "Be the change you wish to see in the world." So continue to encourage fresh music, nourish innovative ideas, and provide a positive experience for everyone involved -- that change might be just around the corner.

This article was originally published on Dancing Astronaut.

Student at University of Southern California