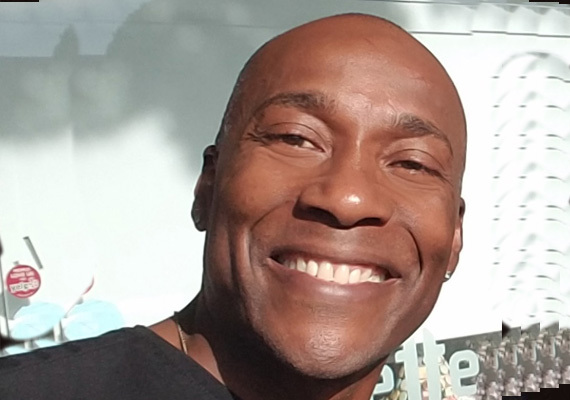 Carlton Wilborn is a dancer, actor, and life coach. [Photo by Daryl Deino]

In late February, a famous right-wing New York City tabloid, which recently endorsed Donald Trump, published a very cruel article about Madonna. The hatchet job, which was picked up by other right-wing websites, explained how Madonna was a vicious woman who has always found young and new talent just so she could exploit and dump them. The article quoted Madonna's Blond Ambition Tour dancers, who have been promoting their new film Strike a Pose, a documentary about what happened to Madonna's dancers since the tour. The film has, so far, garnered early favorable reviews.

I had just written an article about Madonna's 1991 documentary Truth or Dare and how the film was a major milestone in the gay rights movement a couple days before the libelous tabloid article was published. My piece received a larger response than anything I had written in my entire life. I received emails from hundreds of other gay men who shared my experience and all gave me stories on how the film helped them accept themselves. There were some who even expressed how Madonna, her dancers, and the film prevented them from committing suicide because Truth or Dare, the first big mainstream film that showed gay men kissing each other and embracing their sexuality, showed gay audience members, who were experiencing extreme hate influenced by the religious right, that they weren't alone in this world.

I was thankful that later that day, some of Madonna's dancers in the film confirmed that they were misquoted in the tabloid piece or their quotes were taken out of context. Still, I felt a responsibility to talk to Madonna's dancers in person. So far, I have only spent time with Carlton Wilborn, who shares my Chicagoland roots.

Carlton was a dancer on two tours with Madonna - 1990's Blond Ambition Tour and 1993's The Girlie Show Tour. At one point in 1995, when Carlton was having a difficult time both personally and professionally, Madonna let him live at her house for several months. Carlton says Madonna was a huge asset to him on both a professional and personal level. Their relationship went south after Carlton introduced a script for a film he co-wrote and would star in with Madonna.

"It just didn't unfold the right way and I thought...well, I think I'm getting a few signs that I needed to stand on my own...for my own sense of self-worth. I should not be chasing one person for every opportunity I'm after," Carlton sadly indicates, before stressing that he holds absolutely nothing against Madonna.

In fact, Carlton confirms that the whole idea of Madonna exploiting new talent and dumping them is absolutely ridiculous. He understands the celebrity hate culture that produces vitriolic stories like this, but thinks a conversation about the toxicity of that culture (not only aimed at Madonna) needs to happen.

Before moving on to do more acting and writing books about personal transformation and empowerment, Carlton was one of Madonna's biggest professional partners. After booking a tour with Whitney Houston in early 1990, Mr. Wilborn found out that the tour had been postponed. Then, he responded to an ad for a new Madonna tour. Unlike other dancers, he says he wouldn't have been devastated if he didn't get the gig.

"For a young black man from the South Side of Chicago," Whitney was the queen, Wilborn says, in response to people telling him he should be more excited about Madonna.

However, the audition Wilborn attended, which took place at Landmark Studios in Hollywood, was a huge success. Wilborn was instantly booked on what would become one of the most influential tours in pop music history. Rehearsals were like boot camp, but the preparation made the tour a lot easier to do once it kicked off in Japan. Carlton knew that some big project related to the Blond Ambition Tour was happening when there were cameras everywhere.

However, Wilborn had no idea how iconic Truth or Dare would become. He had no ideal how it would inspire millions. He wishes that someday, Madonna would release the several hours of unseen footage from the film, including the part where the entire audience at Madison Square Garden sings happy birthday to his mom.

Though much of Truth or Dare is risqué (at least for 1991), Wilborn has no regrets about any scenes he took part in.

"Much of the way I showed up in Truth or Dare is the way I wanted to show up. I couldn't participate in the lawsuit, because we knew the cameras were rolling the whole time. So there was nothing that I was involved with that was crazier than what you actually see," Wilborn says.

Reuniting with cast of Truth or Dare for the film Strike a Pose has been a cathartic experience for Wilborn. In some ways, it has also been depressing.

"After the premiere of the film in Berlin, I felt really down. I was upset with myself because looking at those guys on the screen, I had marginalized them. I now saw the depth and wealth of a human being in each person on the screen. How did I miss that before?" Wilborn sadly asks himself.

Neither Madonna nor her management have reached out to any of the dancers, director, or producers of Strike a Pose, but Carlton isn't giving up hope, especially since it's way too early. The film has only played in Berlin and Tribeca, with a wider release coming in May. When I tell Carlton how much I wish everybody from the Blond Ambition Tour could reunite, he enthusiastically suggests that I start a campaign for Madonna to do another tour with everybody from the Blond Ambition days. Consider that campaign started right this second.