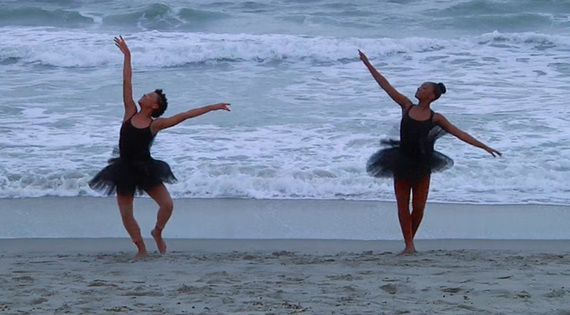 I stood between my mother and an old teaching buddy. A few aisles away, a colleague turned to snap our photo. We had all been invited to a suburban college chapel in the New York metro area to attend the premier of Josh Fox's new film, How to Let Go of the World and Love All the Things Climate Can't Change. We were dancing.

I'll get to the dancing part later, I promise.

First, let me tell you about "my people" -- the people who breathe life into my world.

My mother, in her advanced age of 88, keeps her keen mind sharp. Along with daily doses of bridge-playing, museum-hopping and exercise classes, Mom seems to be more and more engaged in politics than I can ever remember. Recently, she joined a debate caucus in her community. Lately, I've been feeling like the proud parent, and she, the upstart daughter!

The teacher friend is a hardened professional. While much of her activism is aimed at fighting the Common Core education standards, she came to the screening with her whole brood: two sons, a husband and her parents. Before the film, I handed her a copy of our new children's book, Every Breath We Take, and asked what she thought. After a careful read though, she said, "What a beautiful book. It teaches children to love something they don't even know they care about -- clean air!"

My climate activist friend, eats, sleeps (very little) and breathes climate change. She says her mission, as a college professor is to inspire activism. So she brought students from her "Environmental Writing and Media" class in hopes that they will go out and make documentaries some day that will help save the world.

The film opens with Josh dancing to Beatles music. He's celebrating because the fight to protect his home, the subject of his Emmy-winning documentary, Gasland, is over. His small community on the Delaware River successfully fought off the fracking industry.

Josh's elation turns to hopelessness when he discovers a hemlock tree that he cared for since he was a young boy, is dying from a parasitic insect invasion.

The cause? Climate change. The invasive tree-eating pest thrives in warmer winters.

In misery, he asks, "Can a person stop a wave? Could you stand on the shore and stop a wave from crashing? What are the things that climate change can't destroy? What are those parts of us that are so deep that no storm can take them away?"

In How to Let Go of the World, Josh travels over six continents hoping to "...find people who'd found this place, this place of despair, and gotten back up."

Through Josh's lens we see the ravages of Hurricane Sandy and the social injustices that followed. On the Amazon River, indigenous people push back against the oil companies. Fighting to protect their precious ecosystem, they are their own regulatory monitor's because, "Everything has a spirit." In the Pacific Islands, Australian coal ports are blockaded to keep the low-lying islands from being swallowed up by sea level rise. The passion of the Islanders is palpable, as they exclaim, "We're not drowning, we're fighting!" His rare footage of China is harrowing. Twenty million people cannot open their windows because chronic smog chokes the air and children are racked with illnesses. Josh experiences firsthand how basic human rights are muzzled when the Chinese authorities learn he is a journalist. To avoid having his film footage confiscated, he must hide the video files in his banjo.

Does he find a place that climate change hasn't destroyed?

No. But what he finds at each location is the activist spirit -- and it is alive and well.

When the film concluded, music filled the room and Josh danced up to the podium to talk about the "Let Go and Love" tour. The audience swayed to the music.

I glanced over at my mom -- she was dancing.

I was reminded everyone has an activist spirit, no matter what age -- and love has everything to do with hope.

How to Let Go of the World trailer from deia schlosberg on Vimeo.

Photo: Screenshot from How to Let Go of the World