If you were shown two pairs of legs, one belonging to a runner and the other to a dancer, would you be able to tell which was which? You'll probably say "no problem." The runner would have the lean, straight legs with angular quads, lean hips but little definition in their outer glutes, and tight rears but not especially lifted ones. The dancer would have the curvier legs, the defined, lifted glutes, and the more compact, firmer looking muscles.

As straightforward as these differences might seem to us, there isn't much scientific validation for them. Fitness experts have written that the two types of legs are equally strong, and a Swedish study has added its weight to this speculation by discovering that the legs of dancers and runners have the same amount of "slow-twitch" (stamina enhancing) muscle fibers.

What's missing in this discussion is the question of how and to what extent the legs of dancers and runners differ from each other. In my view, which is based on 20 years as an exercise teacher, running and dancing do produce legs that look and behave differently from each other, and I'd like to suggest some reasons why.

First of all, I've observed that the legs of beginning Bar Method students who are runners usually shake uncontrollably during the thigh-work section, causing them to have a hard time getting through the exercise. I think the reason this happens lies in the mechanics of running. Each step by one leg gives a brief rest to the other. Additionally, the front and back of each leg get a second tiny rest due to each side's firing separately, first the quads, then the hamstrings. Running is thereby highly efficient at conserving energy, affording leg muscles built-in instants of regenerative rest so that they are never completely exhausted. Put a runner's quads or hamstrings in a situation that calls for sustained muscle tension - or strength work -- and they experience quick fatigue. Dancers, on the other hand, train to hold sustained positions such as plies, extensions, and balances. Bar Method exercises go a step farther and increase the time spent holding such positions from seconds to minutes. This strengthening technique forces every possible muscle fiber to fire, thereby exhausting the muscles through and through.

Second, running favors some leg muscles over others. When runners use their legs to propel themselves forwards, two muscle groups, their quads and the hamstrings, do most of the work. Their glutes kick in only when they are sprinting full out or jumping, motions that demand a large range of motion through the hips. Serious runners do practice laps composed of wide leaps for this very reason. Those who stick to jogging-sized steps end up not providing their glutes with enough challenge to change their shape.

Third, running tightens the muscles around the hips. This loss of mobility restricts runners' ability to recruit the muscles that connect their legs to their torsos, causing these muscles to atrophy and their legs to appear less toned. One muscle that can get especially tight on runners is a hip-flexor called the "tensor fasciae latae." Any gait faster than a walk, if performed frequently, can cause the "tensor fasciae latae" to tighten and restrict the function of other muscles such as the outer glutes. (A tight tensor fasciae latae can also cause a painful condition called IT band syndrome.) Dancers, however, develop every muscle at their disposal by extending their legs outwards and upwards in every direction.

Fourth, every step runners take impacts their joints and muscles with a force of one-and-a-half to five times their body weight. These steps add up -- runners take around 35,000 steps on one 10-mile run. Eventually, the steps can shake the muscles and skin a bit loose from a runner's body. Dancing rarely involves repetitive pounding, and the Bar Method uses no impact at all. This way, as the leg muscles of Bar Method students develop strength, they wrap tightly around their underlying bones.

Finally, intense running without sufficient fuel sometimes forces runners' bodies to burn their own muscle. This loss of muscle mass can cause runners' legs to lose tone and appear flabby. Dancers and Bar Method students share the objective of building dense muscle, though for slightly different reasons -- dancers to gain the power to jump, Bar Method students to develop firm, sculpted legs.

Don't get me wrong. Running creates nice looking legs. Dancing and the Bar Method, however, can take them into the realm of beauty beyond the scope of what running by itself can achieve. 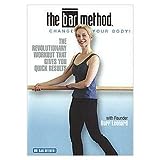 The Bar Method: Change Your Body
by Burr Leonard