Honestly, I had no expectations for the Galapagos Islands. I was a tabula rasa--a blank slate--just traveling through Ecuador as part of a 4-month trip. The islands weren't really on my radar, but when in Ecuador, one "does" the Galapagos. You can't really go home and say, "Well, I was close, but I decided to skip the Galapagos."

Of course, everyone raves about the islands. I don't think a review exists that disses them. Were it not for all the raves and the fact that the islands are a UNESCO World Heritage site, which I'm a sucker for, I might have tiptoed right on by and never told anyone. Because, frankly, touring the islands involves a bunch of decisions, and all of them are expensive. As in, First World kind of expensive.

Which was not the kind of travel I'd been doing through South America.

But Google is my friend, so I dug in and decided that, since I was "doing" the islands, I might as well do them right, so I would take an 8-day cruise. (There are cruises of varying lengths--from 3 days to 15. It's also possible to be based on one of the inhabited islands and make day trips from there.)

I wanted to see the outer islands--Genovese, Floreana, and Espanola. (Cruises offer various itineraries.) I wanted to be on a smaller, 16-passenger boat instead of a larger one with more luxuries. I didn't want to be on a sailboat because I read that they mostly motor anyway. I wanted something in the Goldilocks price range--above backpacker and below luxury. Just right.

I chose the San Jose--a 16-passenger cruise boat, and then I contacted the Happy Gringo travel agency to reserve my booking 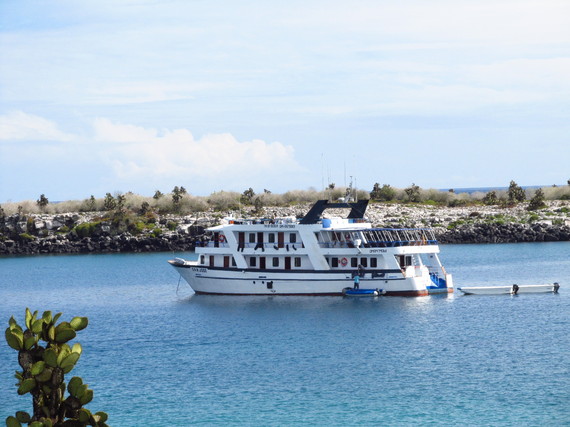 Then, I booked a flight to the islands, a cost that is often included in the price of the cruise. I decided to do it myself and made arrangements to meet the boat at the airport. (Actually, my agenda was more complicated than that, but I'll spare you the details.)
Arriving at the tiny Seymour Airport on Baltra island in the blindingly harsh Galapagos sun (this is the equator, after all), I was honestly underwhelmed. It's a scraggy, hot, desert landscape. The American Southwest is more interesting.

But I was ready; I was psyched, even. I had my gear: snorkeling goggles in my eyeglass prescription; sunblock with 50+SPF protection, a hiking pole I never used, binoculars that I used a lot, rain gear that also came in handy, and a light, white coverup for extra sun protection.

Eventually, all 16 of us with our mounds of baggage were loaded onto the boat, and we were underway, chugging toward the open ocean. A couple hours later, as I sidestepped sea lions lazing on the beach on idyllic Mosquera Islet, I began to feel the magic. 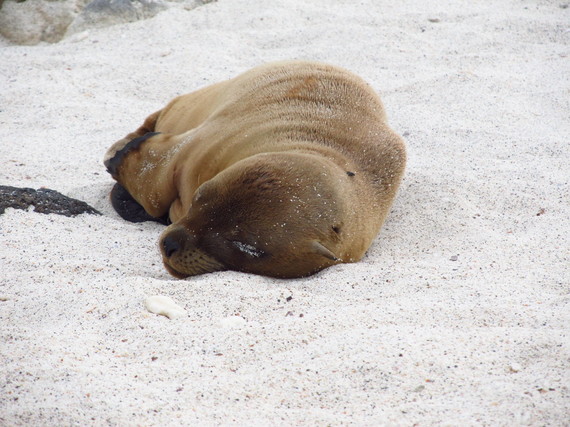 From then on, each day unwrapped itself like a gift. Warm blue sea; sun-drenched islands; birds and sea creatures absolutely without fear. Tasty meals appeared like magic, served by smiling Jackson, the steward. Every day, a new island, a new snorkeling adventure. And in between, utterly blissful crossings from one island to another and at night-a dome full of stars. 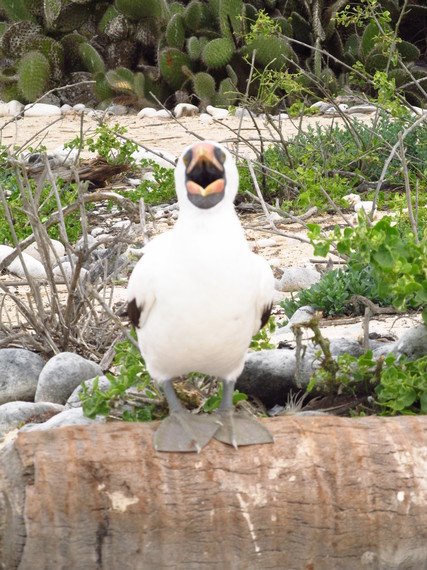 A storm arose once, and the boat rocked like stunt plane. Those with the stomach to eat risked dinner on their lap. I hung on to the edges of the bed that night to avoid being tossed off. It was exhilarating rather than scary. Generally, sleep came easily with the gentle rocking of the boat as it made its way to the next anchorage, the next idyllic island. 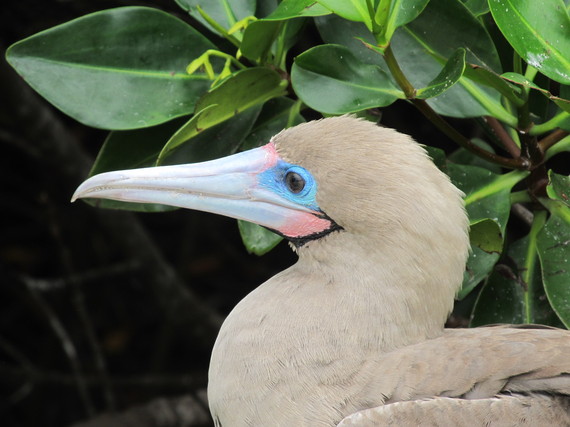 I can't really point to one day or one adventure that encapsulates the experience. I think it was the whole package of daily physical activity in totally unique environments, copacetic fellow passengers, and a seamlessly professional crew that made the cruise so entrancing. 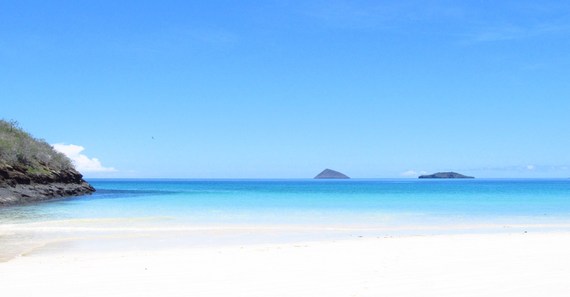 In that sense, the San Jose was a great choice--clean and comfortable but not luxurious. Cabins had blessed air-conditioning, which I tend to dislike and usually turned off, but the equatorial sun was brutal, and occasionally, a cool cabin was a necessary retreat. Each cabin also had twin beds and a shower. 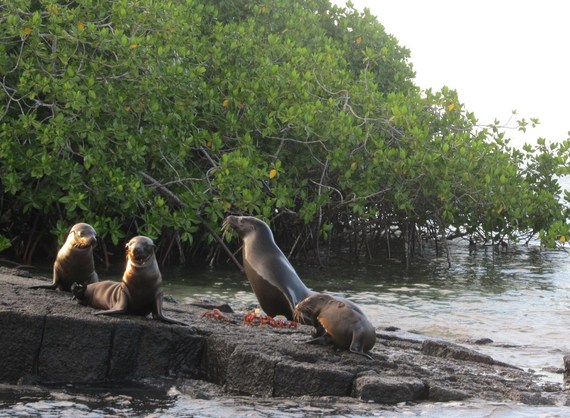 My fellow passengers, from the mom with two teenage kids to the young couple from Slovakia to the octogenarian couple, wanted to experience the islands rather than to bask in luxury, so our goals were the same. No one was a prima donna; no one was a complainer; no one tried to run the show. Most of the people on the cruise were interesting, positive, engaged, and eager to participate.
On these cruises, the guide is a critical component--he or she has some control over the outings; keeps an eye out for our safety and the welfare of the fragile ecosystems we are tromping through, as well as educating us about what we're seeing. He or she is becomes the mama hen herding the little brood through strange and unfamiliar terrain. 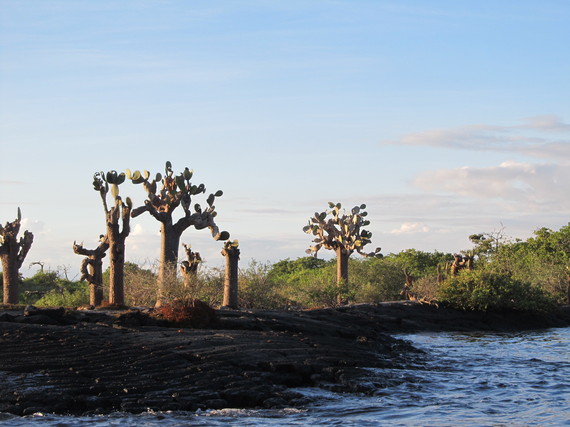 We had two guides. Both were good, but the second was more energetic, so once he came on board, our level of activity increased markedly, and that was a good thing.

Usually during my travels, I am ready to move on after a few days in one place. Not this time. As the page turned on each day--usually with a breathtaking sunset, I was sorry to see the end draw near. The islands were captivating in themselves, but experiencing them from the warm, womblike leisure of a cruise was an unexpected delight. 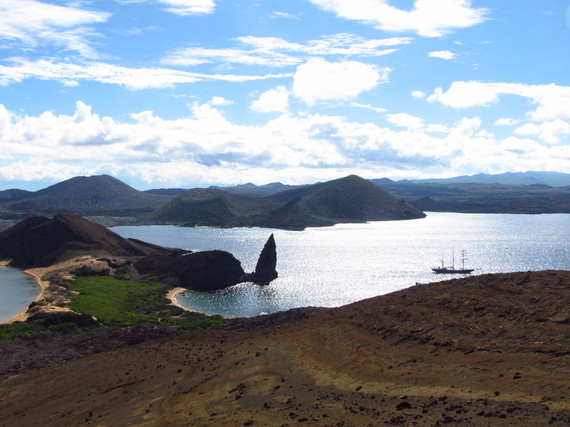 The San Jose generously underwrote a portion of this cruise. The opinions are my own.