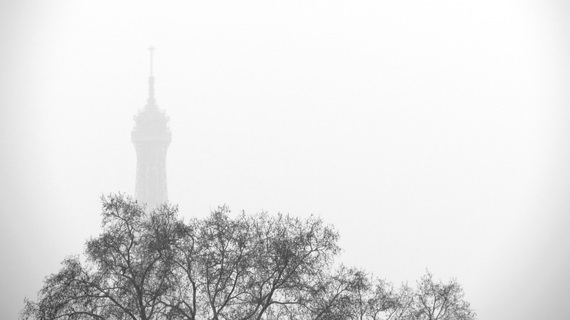 I had just entered the Champ de Mars when the woman saw me. She looked suddenly surprised.

I had come up the Avenue de Tourville, crossed Avenue de la Motte-Picquet, and was walking, strolling really, hands in pockets, hat tilted back, toward the Eiffel Tower. It was a gray morning in Paris -- early March. Foggy and a bit cold, but I was in no hurry. I had just left coffee with friends and was having a wonderful day.

"Monsieur!" she called, in French. She bent to the ground, startled, and picked up something small.

"Did you drop this?" she asked, changing to English.

She was neither young nor old, dressed in gray and black layers and a hat of her own, hard to describe.

She held her hand out toward me. A small gold ring, looking very much like a wedding ring, rested in her palm. I smiled at her first mistake. We walk away, not toward, the things we drop.

I took the ring from her hand and held it up, turned it around, gave it a good looking over.

"Thanks," I said, and took a step away from her, looking for her accomplice. But there was no one near.

"Monsieur!" She stepped in front of me. "My family is hungry. A few Euros, please?"

She had a good face for this. Sad, but not threatening. I put the ring back in her hand.

She huffed and walked away.

I continued my walk. But at Rue de Grenelle, just one block from the first attempt, I saw two grey women approach a lone woman in a bright yellow coat. Suddenly, there was something on the ground.

"Mademoiselle!" In French. "Did you drop this?" In English.

The lone woman reached out her hand. One of the grey women stood facing her, talking, while the other moved to her side. I dug my camera out of my pocket, zoomed in and focused. This should be good, I thought. But 20 yards away, another woman standing alone next to a tree saw what I was doing and called out the warning. The duo left the bright coat fast and I put the camera down.

"Fuck you." The woman from the tree was by my side, standing close, a bit unhappy.

"You think you're helping?" The grey pair had come up too. They were all speaking in English.

"You're taking fucking pictures and taking money away from us!"

"You're stealing our money!"

"Would you like me to take your picture now?" I asked.

Each of them spit at my feet and walked away.

Ring day, I thought. Yesterday was petitions, groups of children running up and surrounding you, holding out a petition of some sort for you to sign, waiting for your arms to reach out, away from your body, your bag, your purse. One group here. Another group there. Yet another group farther on.

One more block, crossing Rue Saint Dominique, and I see a car pull up. The door opens and before the driver can exit there is a man in his way. "Monsieur!" The man reaches into the gutter by the car. "Did you drop this?"

A man I assume is Parisian, walking up to this scene, barks at the thief. Literally, he barks. Like an animal. Loud. He raises his arms and pounds forward. The thief retreats.

Then nothing. I keep walking and no one finds a ring for me or anyone else. It's like a border has been crossed. The crowds grow thick toward the base of the tower. The fog has not lifted and the tower looks a bit eerie. Everyone points their camera at the base, at the top, at the trees, through the trees toward the top, at some friend waving from the next platform up. Everyone is distracted, I think. Easy targets. But perhaps there are just too many eyes. Too many cameras. Or perhaps there is an understanding, a bit of economics, an appreciation of carrying capacity or sustainability. To keep people coming, you can't make them afraid to arrive.

I turn right at the river. Eventually I will get back to Ile de la Cite and Notre Dame, then across the bridge for dinner at Café Dante, and then a small hotel in the Latin Quarter. Perhaps I'll go for ice cream at Berthillon on Ile St. Louis or keep walking to Place des Vosges. The day is open for walking. No one approaches me as I walk away from the Eifel Tower.

When I cross the bridge over to Place de la Concorde, though, I see a car pull up. The rear door opens and a young couple steps out, Asian, well dressed, so clearly newlyweds or lovers in Paris their innocence screams from the car door.

"Monsieur!" There is a man reaching to the pavement, picking something up, holding it out to them. "Did you drop this?" An accomplice waits by the rear bumper.

My turn, I think.

"Monsieur!" I call, in French. The man and woman, the thief and his accomplice, all look at me. "You are being robbed," I say, in English.

The couple looks astounded. The accomplice disappears. The thief, however, is fast to my side, yelling at me in French. I keep walking. He matches my pace. If there were an instruction manual for ring day, I'm sure there would be a line about how you should try to intimidate the people who interfere. But I am taller than this man, and a good bit heavier too. The confrontation is almost cute.

We walk half a block and then I turn to him.

"I do not speak French," I say. So he switches to English.

When I cross the street, he does not follow.

But I swear to God, twenty steps later there is a man in front of me. He stops, surprised, nearly shocked! There is something on the ground!

This is too much, I think. Way too much.

"Wait!" I say, stepping toward him. "You found a gold ring!" I say. "It was right here on the ground. You want to know if it's mine! You want to return it to me. That's a nice thing to do. You could have kept it for yourself, but you're a good man. So, perhaps I could give you a few Euros? Your family is hungry. You're a good man. An honest man!"

The man looks at me, silent. Then he huffs and begins to walk away. But he stops, turns, looks at me again. He smiles at me and I smile at him.

I am not approached, even once, the rest of the day.