Dane Cook is NOT HAPPY with the new poster for his upcoming film My Best Friend's Girl, seen in full below. He posted the following rant about the design and bad photoshopping on his MySpace page. The film is out in September.

Before the downpour let me just say that my new movie, "My Best Friends Girl," is the best / funniest film I've done yet. It's got a terrific cast. Kate Hudson, Alec Baldwin, Jason Biggs, and myself really kicked the funny around. This movie showcases our talents accordingly as it expands on them. It's a fun R-rated flick. An edgy comedy with a dash of romance.

That being said, let me address the fact that although I'm not a marketing major, I have a bit of a trusted reputation after 18 years self promoting. I'd like to inform you I had no say in this marketing campaign, but if I did, things would be different since it is obvious that this poster is boring / odd and has zero to do with the movie I performed in.

Here are a few things that truly blow about my upcoming movie poster to promote the release of the film opening on September 19th:

1. Graphics:
Whoever photoshopped our poster must have done so at taser point with
3 minutes to fulfill their hostage takers deranged obligations. They should have called Donnie Hoyle and had him give a tutorial using "You Suck at Photoshop" templates. This is so glossy it makes Entertainment Weekly look wooden.

2. My head:
The left side of my face seems to be melting off of my skull. I guess I am looking directly into the Ark of the Covenant? Are they going for the bells palsy thing here? My left side looks like Brittany Spears' vagina.

3. The Stare.
My character apparently has fallen in love with a strand of Kate Hudsons hair. Kate's mannequin is desperately in love with the inside of my right ear while Jason is half stunned, half corsage.

4. Lips:
It looks like I'm wearing Maybelline Water Shine Diamonds Liquid Lipstick. My characters name is now Winter Solstice and I'm a hooker with a heart of gold. Jason is my floral carrying pimp, while Kate is my first trick!

5. Fashion:
My character is sporting a very high collar I mean damn they should be snow capped at that altitude. It's going for the vampire lurking in the castle basement vibe. An Olympic pole vaulter would have a tough go clearing that collar. I'm also able to turn my head comfortably 180 degrees, because I was raised in an abandoned barn by a family of owls.

6. Flesh:
It's no secret that I'm more rugged facially due to a drunken visit by the teen acne fairy, but according to this poster I've got perfect porcelain flesh. I look like the fuckin' bathroom floor at Caesars Palace. One of Marie Osmond's dolls would look at me and say "shit ... that guys got flawless skin!"

7. Hair:
It's actually a close up shot of Tom Sellecks Magnum P.I. mustache they photo-slapped on my noggin'.

8. The set:
Pick one. This entire film takes place:

A. on Gattaca
B. at the Fortress of Solitude
C. inside a crystal wind chime

9. The cast:
Alec Baldwin is so fucking funny in this movie! Is he on the poster? I think so. He plays the wise talking plant Jason is clutching.

10. Final thoughts:
I set out to make a movie like the contemporary men and women, that you and I respect, are making. My generation of comedians, actors, directors and producers that I wish to collaborate with as I build a solid body of work.

Granted, one poster stinking up the joint isn't the end of the world. Yet it sends the wrong message about our movie and I just wanted you to know, that I feel the pain. I really love the film and I know from past missteps marketing wise that the wrong poster sends the wrong audience into the theater.

Thanks again for all of your support. If you have not seen the red band trailer (which is excellent and represents the flick accordingly) click on the link at the top of this page.

PS - "Its funny what love can make you do." I just threw up all over this awful poster.
Wow, wait ... it looks better. 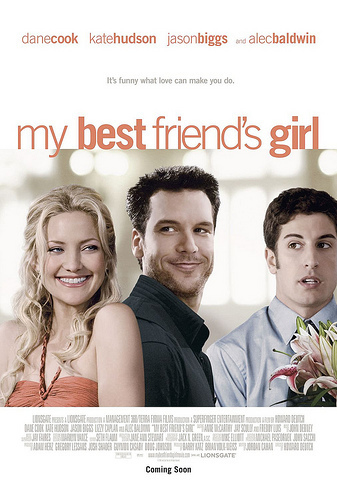