Whilst men, women and children continue to drown in our seas as they leave behind their families and possessions in a desperate attempt to reach Europe, the Danish government, with support from the social democrats, has caused quite some stir, as they voted to make it legal to seize valuables from refugees once they arrive on Danish soil.

Compassion has been set aside for click-bait politics and hardcore budgeting. Danish politicians, on both sides, have leveled many of their disputes down to a mud-throwing competition on social media. The refugee narrative that the media and politicians are building, wearily lacks concepts of wisdom, strength, and empathy needed to bring the world and its citizens through the toils of war and conflict.

Unfortunately, what many seem to forget, is that the harsh critique of the Danish and other European governments' politics is not about how much money they spend on refugees, not how many resources they need to provide for them. No, the critique is hinged on the blunt withdrawal of humanitarian values on which Denmark and Europe laid its modern foundation.

Thousands of Danes are helping refugees
In a quest for humanitarian values that have traditionally been at the core of the Danish welfare state model, thousands of Danish civilians and a plentitude of companies like Danfoss are going against the political tide and are setting up programs to help, educate and hire the new arrivals, many of whom lack a professional network, speak poor English, and only a mere 13% have an education above 9th grade.

Without concrete solutions, we will see ten thousands of people on welfare with few, if any chances of being integrated into the European societies. This presents a real challenge to the Danish labor market and economy. Though the toughest of all challenges in a statistic minded Europe, will be to bring our compassion into the core of decision-making for the millions of people who are fighting a battle to bring their loved ones to safety behind European borders.

Already in 2013, my organisation Cultura21 Nordic (now Growing Pathways) together with the Association for Social Innovation (FFSI), designed our first sustainable business course in partnership with Danish Red Cross to strengthen refugees' possibilities of becoming integrated into the Danish workforce. We called it "Take Control of Your Life", with emphasis on 'Your'. 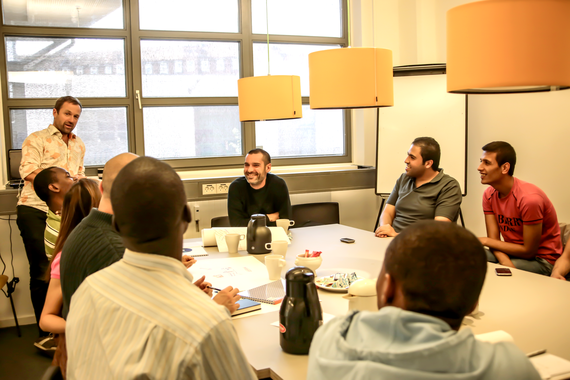 When considering that factors such as climate change have the potential to send refugee numbers to over 100 million by 2050, the need for concrete solutions regarding resettlement and redistribution of the world's people and wealth is rather blatant. In this regard, it became vital to provide asylum seekers at the Red Cross centres in Denmark with the entrepreneurial skills for them to become self-sufficient.

It was indeed meaningful for all attendees to take small steps together towards mitigating the planetary and humanitarian costs brought about by irresponsible practices.

Every human being possesses their own strength
Rather than countering the populist political rhetoric that focuses on the seemingly irreconcilable differences between representatives of different cultures, we focused on the power that every human being possesses. The strength to go beyond our limits and create new initiatives that help us regain control of our lives.

"Instead of focusing on minimizing the economic and social costs of asylum seekers, we thought of them as potential innovators with purpose and imagination," marks our Educational Director, Oleg Koefoed.

As such, the asylum seekers in our sustainable entrepreneurship program visited local companies, and public institutions. They explored the opportunity of collaboration with locals possessing place-specific insights and contributed with their own experience.

After all, the latest IMF findings, as of January 2016, point out that "the (expected) impact of the refugees on medium and long-term growth depends on how they will be integrated into the labor market".

Skilled across borders
Fred, a young man of Kenyan origin, came with the dream of carrying out urban reforestation projects. Two days before the end of the course, Fred was sent to back to Italy, his first country of entry into the EU. The team had not heard from him in weeks when we received an email saying that his newly achieved ability to tap into the local community had been such an empowering experience. In fact, the first thing he did when arriving in Italy was to walk into the office of the Italian National Research Council, offering them to start research on the refugee communities in Rome.

Assuming that he was allowed to stay in Denmark, what follows is a "fend for yourselves" attitude that creates a rift between the needs, talents and aspirations of refugees and the Danish labour market. With little knowledge about Danish laws, the entrepreneurial scene, and possibilities, integration can seem an impossible task.

There can be little doubt that the current refugee crisis, the biggest humanitarian crisis since WWII, causes its fair share of problems for many the world over. Facing this condition, we invited the asylum seekers into a world of change-making, as we all share the responsibility of shaping future sustainable societies with minimal risk of war and natural disaster.

Our Choice
We, you and me, choose whether to look at a condition as a crisis or as an opportunity. Refugees also bring survival skills, creativity, hope, and a strong will to learn from hardship.

Alternatively, we, as a society can end up creating welfare clients that face an adaptation struggle. We can easily cultivate the conditions for parallel societies, reduced life expectancy, conflict and ultimately, radicalisation by marginalizing and isolating the newcomers.

Let us be prudent and choose the first option. Integration, in the end, is about welcoming those who wants to make a positive difference for themselves and their new communities and giving them the opportunities to do so. There are mutual gains to be made by all parties in the refugee debate, and it is this that the dominant discourses should focus on.