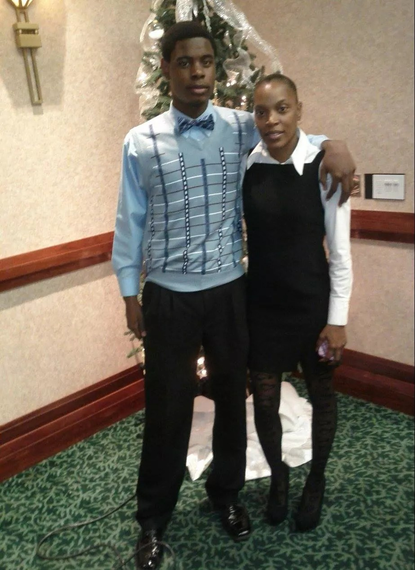 NOTE: I received a Faculty Development Grant from Columbia College to do reporting about nursing home advocates in Arkansas. While there, I learned about the following story.

From the time D'Angelo Hooks was born, his mother Danyelle called him "Man."

As he became an older brother.

He was going to be the man of the house, Hooks said, her entire body shrouded in pain as she sat in a chair at a hospice center in Little Rock, Arkansas Friday evening.

D'Angelo acted like a man when he accepted Christ as his savior at age 10.

A member of Junior ROTC, D'Angelo was planning to enlist in the military after graduating from high school this spring.

He hadn't decided which division he would join, said his mother, but he had definitely decided that he was going to serve his country.

But that service, and the emergence of D'Angelo into full adulthood, was stopped permanently on a Saturday evening in November.

That's the evening that he returned from work and, after consulting with his younger brother Edward Sanders, asked his mother if he could go to a party.

Hooks knew about the dangers of the street, but since D'Angelo rarely did anything socially, she agreed.

Danyelle was up because, like mothers the world over, she doesn't sleep until her babies get home.

I'm sorry to tell you this, he said, but D'Angelo's been shot.

Edward witnessed the bullet, one of a series of shot fired by what police said was multiple gang members, enter his brother's head above his right eye.

The doctors later told Danyelle D'Angelo's brain was like a mushroom.

The little hope the family had hinged on a surgery that they prayed would help restore some of his functioning and help him make a recovery.

But that sliver of possibility was dashed during D'Angelo's stay at the Brookside Health and Rehabilitation Center in Little Rock.

He went there after being discharged from the University of Arkansas for Medical Sciences.

The family didn't know before D'Angelo entered Brookside that it had received the lowest possible rating for quality of care from the federal government.

Or that it had been rated among the least safe 5 percent of nursing homes in the country in 2009, according to data I received from the Government Accountability Office.

Or that it had received dozens of violations from 2011 to 2013, according to my analysis of inspections data.

They just knew they had little time to choose before D'Angelo was discharged.

D'Angelo's skin was fine when he entered Brookside, his mother said. But it didn't stay that way, she alleges.

Within weeks, he developed a stage four pressure sore above his buttocks that was so deep his bone was visible.

It was so big it looked like you could fit a basketball in his butt, Danyelle Hooks said.

He need a colostomy bag.

His ears developed a sore, too.

Because of this, the family said, the surgery was not possible.

The bullet took his brain, D'Angelo's father Alandi Credit said, but he's dying from the bed sores from the nursing home.

I feel I was robbed, Danyelle said.

Nursing home administrators could not be reached for comment, but Brookside Executive Director Christine Wilson wrote my collaborator Brittney Johnson, a reporter at television station KARK in Little Rock, that D'Angelo did not leave the facility in the condition the family described.

There is no word in English or in any language that I've found for parents who bury their children.

It is not because the concept does not exist, but rather because such an act is against the natural order of events.

It is not supposed to happen.

Yet that is exactly what Danyelle Hooks prepared to do last Friday after hearing from the doctors that D'Angelo's life would end soon.

Even though that day had not yet come, she spoke about her son in the past tense.

When we spoke Danyelle's eyes glistened with tears that gathered on the edge of her eyelids, but did not fall.

He wouldn't want me to cry, she said.

Yet her grief was so deep and so pervasive it hovered around her like a cloud.

For the graduation party that will not happen.

For his grandchildren she will never hold.

For Edward, who has struggled mightily since his brother's shooting.

For the lack of answers from law enforcement and for his suffering at the nursing home where he was supposed to heal.

Yet somehow, despite her unimaginable grief, Danyelle Hooks found within herself the strength to tell her story.

Part of that courage, she said, came from wearing D'Angelo's school identification around his neck.

He's protecting me, she said.

Go here to see a KARK story about D'Angelo and the family's experience.