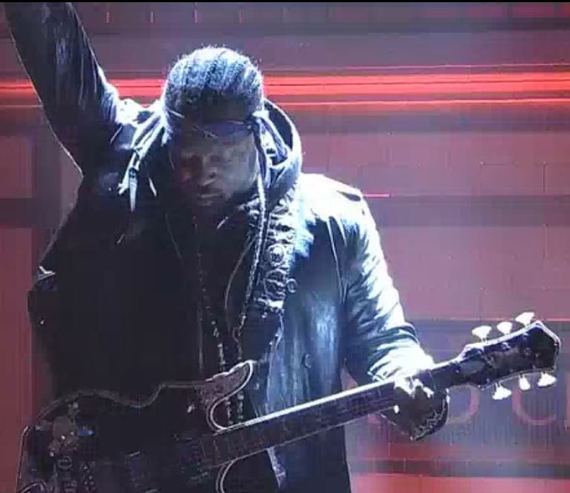 D'Angelo raises a power salute during his second SNL performance

Saturday Night Live became relevant again for about five minutes during Episode 13 of its 40th season. But it wasn't the writers or the cast that did it.

In his best comeback TV performance thus far, he paid tribute to Mike Brown, Eric Garner, Trayvon Martin and all the other young black men who became just "lines in chalk," as his song, "The Charade," lamented so powerfully.

Let me give you the bridge and chorus of that song, so you can feel just how high he elevated SNL for those few minutes:

All we wanted was a chance to talk
'Stead we only got outlined in chalk
Feet have bled a million miles we've walked
Revealing at the end of the day, the charade...

Yes. He sang that on the show that even Chris Rock couldn't save earlier this season.

He's been away for a long time, D'Angelo. Touring Europe extensively -- or so I've read -- while retooling and regrouping apparently in ways we cannot even begin to imagine.

But we could see it in both performances. He is still the quintessential Old School soul singer of yesteryear. But now he is also one of the most subversively progressive black performers we have right now.

And it is riveting, this melding of the simmering sensuality for which he was adored in his first incarnation -- and from which he probably and justifiably ran for a while -- with this unique new groove that I admit is almost indescribable. And yet still so "soul-filled."

So no, this isn't the ebony love god who bared nearly all in That Video which I won't post here because it's not about that anymore. But it's linked -- go on, take a look. You know you want to. Especially if you remember it as fondly as millions of others -- especially women -- do.

But while you're looking, listen. Because he can still make you feel like that.

And he sucked all the silly out of SNL and really said something the other night. I honestly don't know how the cast could go out there and do those awful skits after that.

I didn't stick around, that's for sure. I watched D'Angelo and his band standing there, fists raised, with that "chalk" outline of a body on the floor before them... and then I turned off my TV altogether. All I wanted was to revisit Black Messiah, his latest album, to listen far more seriously than I previously had.

I admit it. I didn't "get it" at first. Perhaps I was turned off because the first review I read attempted to explain -- scientifically -- why it made people want to make love whenever they listened to it.

But I don't think that writer really "heard" it. I am going to sit down, close my eyes and listen until I hear everything he returned to say to us.

Because D'Angelo isn't just back. He's bolder and even more beautiful than before -- the swag's still there. And the new ensembles -- to die for.

But musically he's taking that "less traveled" road. And reminding us that black music matters, too.