Oscar Wilde once said, "The truth is rarely pure and never simple." He also said, "Man is least himself when he talks in his own person. Give him a mask, and he will tell you the truth."

White Pride is an examination of different segments among the white separatist movement in the United States, including the Ku Klux Klan (KKK), who -- more often than not -- we're solely used to seeing in full regalia of robes, hoods and overt white separatist symbolism, from swastikas and the Hitler salute, to the burning cross.

As revealed by Anthony Karen's photography, we are given a truly unprecedented look not just into the public faces of these groups, but into the private lives of members away from public demonstrations and the usual focus of most media attention, from photographs of members at home to ceremonies most non-group members are never allowed to see. 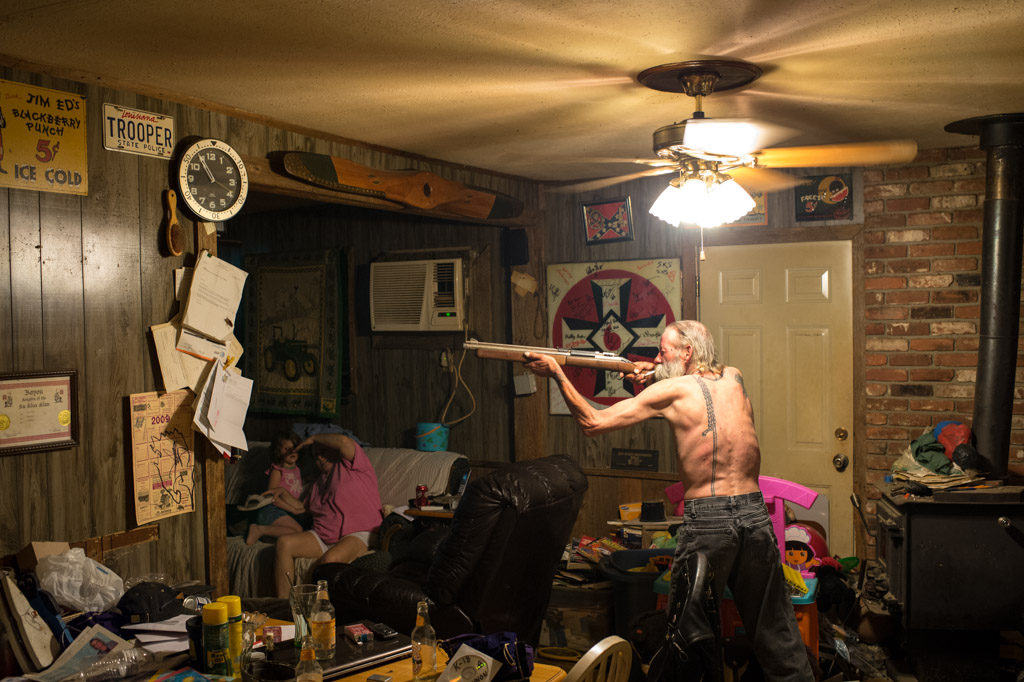 Svetlana Bachevanova, the book's publisher, in an interview featured at the book's end, asked about the reason for Karen's interest, during which he explained his reasoning for not taking the usual perspective:

"[I] came across Magnum [Photo]'s archives of Ku Klux Klan images and noticed most of the imagery all displayed in a similar context. I couldn't help but wonder why no one had chosen to document the Klan without the robes on or explore what went on when these people weren't marching during a demonstration or having a cross lighting ceremony."

Like some of his other work, such as his depiction of members of Westboro Baptist Church, his access has come because people have responded to his willingness to be open enough to see what is there, rather than having an openly combative or visible bias. Instead, as he says to Bachevanova, he feels an obligation "to observe without judgment."

Like many of Anthony Karen's subjects, these are groups of people who are often cast by both the public and the media in an extreme light because photographs such as the more extreme are, as he says in the interview, often more "marketable." This would make it seem that the everyday life of these groups is considered less interesting or even banal.

But ironically, it is the very human aspect of Karen's photography that has been the most controversial, because instead of depicting these men and women in the usual hyperbolic terms we're used to and more comfortable with, he allows us the discomfort of seeing them in their everyday lives. This more human depiction has come with accusations of racism, ignorance, or even naiveté, which based on Karen's personal and professional background, is more than patently clear could not be further from the truth, and too easy an accusation to make, often solely based on such discomfort.

In an Afterward to the book, Life.com's Ben Cosgrove recognizes this difficulty in reception, pointing out that "blanket statements" which "lump" American extremist groups together serve no one, and that the "variety of methods dizzying array of agendas associated with radicals on the extreme Right or the extreme Left" makes such encompassing statements "meaningless."

"Anthony [chronicles] worlds that most of us have never seen this close, this immediately. His pictures of self-marginalizing communities, whether of white supremacists or practitioners of Haitian Voudou, remind us that the world is not a quiet, simple, smoothly operating place. It is -- and has always been -- a huge, chaotic blustering sphere... Photojournalism, from the earliest, thrilling reportage of Cartier-Bresson, Capa and the rest has been about clarity of purpose. Show what is in front of you. Document what is happening. Do away with the extraneous. Illustrate the moment... We look, and look, and look again because we recognize something here and perhaps we're simply hoping that it's not ourselves that we see."

In this book there is no apology for its perspective in attempting to give an honest depiction of these groups, and nor should there be. As Cosgrove also points out, too often it is too easy to demonize others, which separates them, marginalizes them, and then makes it then impossible to understand them enough to address the realities they represent.

As we have learned from any extremist individual or group, including last week in the Boston Marathon bombings, this is dangerous. It is an illusion that such a tendency would make us safer, no matter how much safer we may more immediately feel in doing so. Instead it is more likely that we are just immersing ourselves in a more comfortable illusion.

White Pride is indeed unique in that it allows viewers to come to their own conclusions based on what is depicted. This is indicative of Karen having enough integrity in his work and faith enough in his audience to trust them to have their own views and determine for themselves what they see and why.

This is what ethical journalism should be, rather than it being indistinguishable from editorial, as it is most often in the current journalistic landscape in which editorializing content, instead of presenting information without bias, functionally controls the narrative rather than trusting others to think for themselves, for what they think might be objectionable to certain sensibilities.

In accepting this or in doing it ourselves, we are both lambasting individuals and groups for wearing a mask while at the same time encouraging them to do so for everyone else's sake, to make one group or another easier to distinguish, rather than accepting that all groups of one kind or another are indeed made of individuals, with individual histories, experiences, biases, and agendas.

In making such individuals or groups less human, truth will invariably get lost in the mix, and a good question may be, is that what we really want? More often than not, truth and comfort are antagonistic bedfellows, and as they should be should we refuse to see the world and humanity as it is. But it is only from that place of truth that we can walk forward, in whatever capacity, and deal with what is, rather than the illusion of what we want it to be.

Simple or complex, masked or unmasked, both individuals within and outside of a group dynamic, such as the KKK or white separatists, should be seen in the light of day, and they will be who they are, with or without our judgment.

"Society can't have it both ways," says Karen in the book's interview. "We can't pick and choose who has the enviable right to free speech. It's everyone's right. Disliking someone different from you is not a rights violation, it's just a lost opportunity."

For more about Anthony Karen and his body of work, please see: http://www.anthonykaren.com.

Several of Karen's photographs of the KKK were also featured in a recent Discovery Channel documentary, KKK: Beneath the Hood.

For more information about FotoEvidence, and the interview with Karen by publisher Svetlana Bachevanova, please click here.

To see the book White Pride, it is available on iTunes as an iBook.