JOHANNESBURG — Andres Iniesta will always be remembered for the goal that gave Spain its first World Cup title. And when he scored, Iniesta remembered former teammate Daniel Jarque.

Moments after his extra-time goal gave Spain a 1-0 victory over the Netherlands in Sunday's final, Iniesta took off his blue Spain jersey to reveal a white T-shirt bearing the words, "Dani Jarque: siempre con nosotros" – "Dani Jarque: always with us."

Jarque collapsed and died at the age of 26 on a preseason tour of Italy last year, one month after being named captain of Espanyol.

"I wanted to carry Dani with me," Iniesta said after picking up his man of the match award. "We wanted to pay tribute to him and we thought it was the best opportunity to do so."

Iniesta was given a yellow card for the gesture – the rule when players remove their jerseys – but that was a small price to pay after he blasted a shot across Netherlands goalkeeper Maarten Stekelenburg and in at the far post.

"I can't quite believe it yet," the 26-year-old Barcelona midfielder said. "I had the opportunity to score that goal which was so important to my team. It's something absolutely incredible. I simply made a small contribution to my team."

Moments after explaining his tribute to Jarque, teammates Cesc Fabregas, Gerard Pique and Carles Puyol burst into the news conference room with beers in hand and started chanting, "You're the best, you're the best" at Iniesta, who broke into a wide smile.

"It was a difficult game, the Netherlands closed down a lot at the back and didn't let us get through. We had some chances that we didn't put away, they had some chances too," said Spain striker David Villa. "In the end the goal by our kid 'San Andres' means that we're world champions."

One of the creative midfielders who inspires Spain's attack, Iniesta arrived in South Africa struggling after an injury-plagued season. A thigh muscle injury in his right leg has nagged him since he helped Barcelona win the Champions League in May 2009.

But he saved Spain in a tight, tense game.

"When the game finished a lot of the difficult moments flashed in front of me," Iniesta said. "But, in the end, football sometimes gives back. Every situation has its moment and with this one I felt enormous happiness." 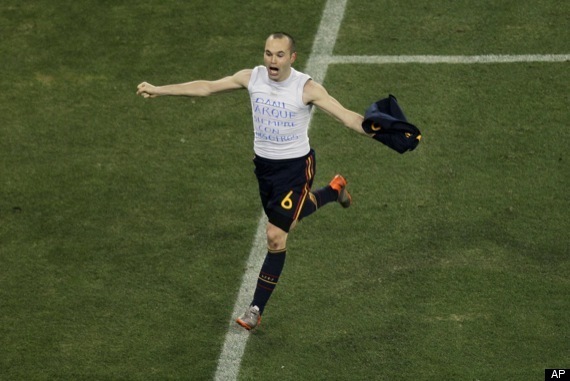 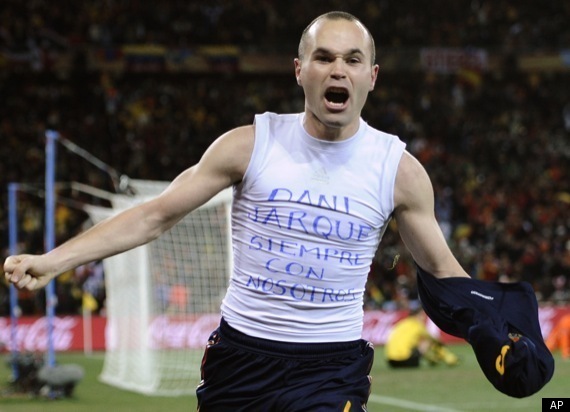