If today's slow, hard slog towards immigration reform gives advocates pause, they might take heart by reaching back into the annals of North American history to consider the continent's first migrant rights movement, one that sprang up nearly 250 years ago. In their own often fanciful re-telling of history, restrictionists like to boast that their immigrant ancestors, unlike those of today, played by the rules and followed the laws. It ain't necessarily so.

Consider, for example, the case of Daniel Boone-- long regarded as an iconic eighteenth century "frontiersman." Boone might also be described as an "illegal immigrant" and a coyote, a human smuggler.

Boone was a soldier, hunter, and fur trader whose exploits and role in the western expansion by colonists made him not only an enemy of Native Americans but also, according to British law, an immigrant outlaw. In the early 1760s, the growing population of colonists saw a need to go farther and farther afield in search of game and territory. Their migrations did not please King George III, since expansion meant loss of political and economic control. Wanting to license fur traders, control land speculation, and avoid costly wars with native Americans, in 1763, the monarch ordered that American settlers not move west beyond the Appalachian Mountains. To enforce the policy, the British government created what, in effect, was the first North American border patrol agency, stationing 10,000 troops along the colonial frontier.

"We do hereby strictly forbid, on Pain of our Displeasure, all our loving Subjects from making any Purchases or Settlements whatever" of land outside the influence of the British government, the king decreed in his proclamation.

The king's "loving Subjects" did not return the affection, and illegal immigrants, ignoring the proclamation, blazed and followed trails across the frontier into what became Kentucky and Tennessee. 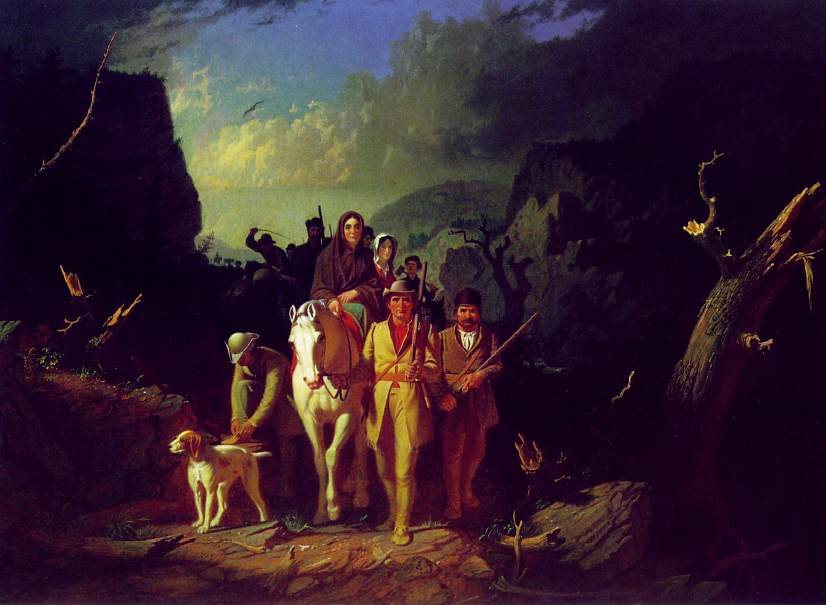 A famous painting by George Caleb Bingham depicts Daniel Boone in a role that today might be described as a human smuggler escorting "pioneers" through the Cumberland Gap between east Kentucky and Tennessee.

Despite protests by land speculators, traders, and settlers, the British government slightly modified but didn't back away from the proclamation. As a result, angry colonists made freedom of movement one of their justifications for self-government.

They recorded their displeasure with the king in one of the grievances enumerated in the Declaration of Independence: "He has endeavoured to prevent the population of these States; for that purpose obstructing the Laws for Naturalization of Foreigners; refusing to pass others to encourage their migrations hither."

So, the colonists were a pro-immigrants rights bunch who not only disobeyed the laws of the land and advocated their change, but connected migrants' rights with their own well-being and that of the states. Sound familiar?

Yes, I know it's an imperfect analogy. Today, there's no tyrannical king ruling from afar. Migrants aren't at war with native Americans. Nor is there a rebellion of foreign colonists who view migration in terms of economic and territorial expansion. But some of the underlying fundamentals have distinct parallels. Yesterday's fur traders, as well as frontiersmen and women, would recognize themselves among today's migrant advocates. Many businesses regard the importation of foreign workers as key to their economic development. And, for their part, many migrants cross political boundaries to escape hardship and to find opportunity.

What are the policy implications of this? For one thing, using history as our collective memory allows us to break down walls between "us" and "them." The more we understand our commonalities, the less able we are to demonize the other.

For another, coming at immigration by enacting policies that take account of why people migrate is without question a better strategy than acting like a monarch and erecting higher fences and mobilizing more border guards. That plan didn't work out too well for George III. It didn't stop Daniel Boone, and for many of the same reasons, it's unlikely to prevent today's frontiersmen and women from crossing borders in pursuit of their own settlements and goals.

Jeffrey Kaye is a veteran journalist and author. His book, Moving Millions: How Coyote Capitalism Fuels Global Immigration (Wiley) will be available in mid-April. www.jeffreykaye.net.

Jeffrey Kaye is a veteran journalist and author