A photojournalist specializing in underwater photography, Daniel Botelho has made a living out of tracking down fearsome sharks, crocodiles and manta rays. But the Brazilian-born Botelho went above and beyond in a rare opportunity to swim with and photograph the elusive, beautiful narwhal.

Sometimes called the "unicorn of the sea," the narwhal is a rare, pale-colored porpoise that lives in cold coastal waters and rivers. The mammal's most eye-catching characteristic is its long, spiraled tusk, most commonly found on males.

At the time of his narwhal sighting, Botelho was at the North Pole, gathering material for a book and other projects, reports Grind TV.

According to LiveScience, between 50,000 and 80,000 narwhals exist in the wild. Of these, the majority live in northern Canada. According to National Geographic, the elusive creatures are a source of nutrition for Inuit peoples in the Arctic, who hunt and eat them for their Vitamin C.

"I always knew it would be very tough to get close to a narwhal whale,” Botelho told Grind TV. “It is notoriously hard to get close to one. But while all the staff could only stand a half-hour in the water, I took advantage of my cold resistance and stayed for three hours.”

The waters at the pole were so frigid that ice got inside Botelho's camera and his face grew red with painful blisters, according to posts on his Facebook page. But after his three-hour wait, a female narwhal decided to shadow him.

"She followed me until the time I left the water, and people around me were amazed, including the [native] Inuits," Botelho said to Grind TV. "They are very mystic with narwhals and they know how shy they are, so having a narwhal touching me was like magical to them. … I cried.”

According to the World Wildlife Fund, the narwhal is a "near threatened" mammal, meaning it is "[l]ikely to qualify for a threatened category in the near future." 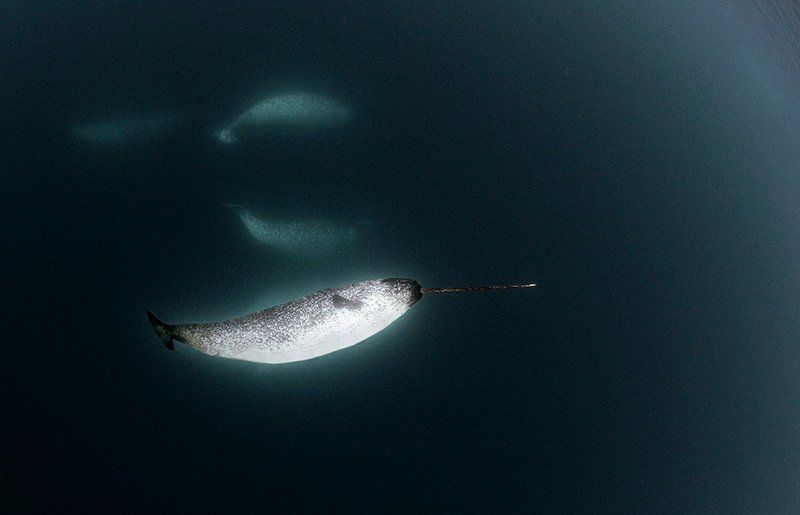