Late last month, chef Daniel Corey was awarded a Michelin star for the second year in a row. Just a few days later, I was invited into his kitchen at San Francisco’s Luce restaurant to help develop recipes for InterContinental’s new Kitchen Cookbook app. Though I write about food a lot, I was humbled to have been asked to work alongside someone who, at 34, has already nabbed such a coveted ranking in his field.

I was nervous to meet and collaborate with him but I shouldn’t have been. Even though his food knowledge is encyclopedias beyond mine, I quickly saw that Daniel Corey is a kindhearted, soft-spoken teacher of a chef. He put me at ease with self-effacing humor and his calm, even-keeled manner -- envision the opposite of how Gordon Ramsay acts. Corey keeps a photo of the Dalai Lama in his office, which obviously has an influence on him. No matter what goes wrong in the kitchen -- and a few things did while I was there -- he maintains a patient, lighthearted humor about it all, and a zenlike, unruffled way of being.

Which would be admirable in any environment, much less a full, sweltering kitchen in the pulsing heart of San Francisco, a city in which the food-and-wine scene can be cutthroat and deeply judgmental. But just as impressive as his coolheaded modesty is his creative talent. Our assignment was to come up with dishes that people using the app could replicate at home. To develop ideas, he asked me to name my favorite ingredients and dishes. I told him that pappardelle always makes me inexplicably happy and that I’ve been obsessed with caps, morels, and truffles ever since I attended Mendocino’s wonderful mushroom festival. He took information that and ran with it, teaching me how to make pasta and putting me to delighted work running our hand-kneaded dough through a whirring machine. (Our collaboration, over the course of a few days, yielded three recipes: hand-cut pappardelle with fall squash and kale, a warm potato-and-mushroom tartlet, and a divine chocolate pot de crème.)

Journalist that I am, I peppered him with questions as we worked: What made you want to be a chef? “I wish I had a story like I’ve been cooking since I was on my mother’s knee,” he answered, “But I don’t. I just really like eating.” Having grown up in Southern California, Corey has always been an avid surfer; he’d get out of the water before anyone else was even awake and just prepare food for himself. After high school, he went straight to the California Culinary Academy, where he learned much of how he cooks today.

His creations seemed to me a dance between simplicity and complexity: His pasta is basically just two ingredients -- egg yolk and flour -- but the sauces he whips up for it involve a perfection of timing, chemistry, and inspiration. When I expressed awe, he responded with a refrain that he kept rephrasing in different ways for me: “Cooking is intimidating but it’s not hard.”

That democratic take on high cuisine, coming directly from a heralded high-cuisine chef, was eminently refreshing to hear. He made me feel that I, or you, could replicate his magic if only we tried. That the curtain and snobbery and intimidation surrounding fine food should be torn down and that any recipe, whether it calls for beans or truffles, should be prepared with kid gloves off.

To be clear, though, Corey’s beautiful concoctions consistently turn out sophisticated enough to shut up even the meanest, most jaded of critics. With food starting to fill the role in our society that art used to, Corey is an example of what should be admired. He thinks hard about his recipes and seems to have an all-you-can-eat buffet of fresh ideas in his head -- let’s replace the basil and pine nuts in pesto with kale and hazelnuts! Let’s use potato shards as tart crust! Let’s whisk peanut butter for the chocolate pot de crème!

“Have you ever thought of teaching cooking?” I asked him after being the beneficiary of his lucid instruction. He replied: “I feel like I’m a teacher every day. When I show someone in my kitchen how to do something and watch them get it, it’s the most fulfilling feeling I can have.” 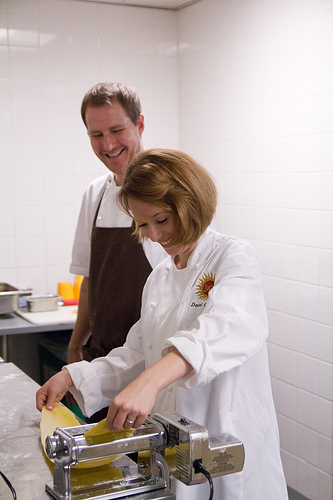