In his early 70s, author Daniel Klein saw his peers taking up jogging, studying new languages and wearing hormone patches to charge their libidos. Klein already harbored a few misgivings about the frantic striving of the “new old age” when a trip to the dentist prompted an epiphany.

“He said I had to get these implants over the course of a year [or] I would look older with denture plates …and my teeth would pop out once in a while,” Klein recalled. “And I thought, ‘what do I care if have a goofy old man smile? I am an old man!’”

Klein returned to the Greek village and philosophers he has visited for decades to discover authentic ways of aging. In his funny and wry account, “Travels with Epicurus: A Journey to a Greek Island in Search of a Fulfilled Life,” he concludes that old age is a privilege to be savored, rather than a disease to be cured or a condition to be denied.

“That’s one of main points: It’s a distinct stage of life,” Klein said. “That has been lost in this ‘new old age’ business. I first went to Greece in my 20s and I’ve been going back to the same island for 40-something years now. To finish writing this book I needed encouragement from my Greek friends. I’ve seen some of them age and they just do it well -- even in the midst of this financial crisis.”

Klein opens the book with a favorite quote from Epicurus: “It is not the young man who should be considered fortunate but the old man who has lived well, because the young man in his prime wanders much by chance, vacillating in his beliefs, while the old man has docked in the harbor, having safeguarded his true happiness.”

Klein explores the nature of that happiness from Kamini on the Greek island of Hydra, serving up a cocktail of observation and memoir, Plato and Nietzsche, Frank Sinatra and Cole Porter. The book tackles weighty issues with a light touch, for example, invoking Jean-Paul Sartre’s warning against treating oneself as an object to argue against hormone treatments:

Klein studied philosophy at Harvard -- and psychology with Erik Erikson, master of life-stage theory -- but spent much of his career as a writer for stars including Lily Tomlin and Flip Wilson. “I’d work for some comedian or quiz show that paid a lot of money, get a big check and buy a ticket for Europe,” he said. Among his 30 books, he ghost-wrote a bestseller with a sex therapist in the 1980s called “How to Make Love To The Same Person For The Rest of Your Life.” (“It still sells in Catholic countries –- in Ireland it’s in its 17th printing,” Klein chuckles.) But he never lost his love for the early Greek thinkers; he’s also co-author of the bestseller “Plato and a Platypus Walk Into A Bar.”

Ultimately, Klein surmises, people running around trying to see 1,000 places before they die are denying a reality creeping too close for comfort. But doing so, he writes, leaves us less “fully and truly alive, like the denizens of Plato’s cave, who mistake the shadows on the cave’s wall for reality, while the facts of life -– some hard to take -– are vividly illuminated just outside the cave’s wall.”

So if not the new old age, then how do philosophers suggest one should craft a meaningful old age?

So if this is the time to sit back, why did Klein write a book? “I do realize I’m being a hypocrite,” he admitted. “My only defense -- and its very weak -- is I’m still working it out. But I’ve convinced myself that Epicurus is right.”

Laura Rowley
Journalist and Author
Suggest a correction
This Blogger's Books and Other Items from... 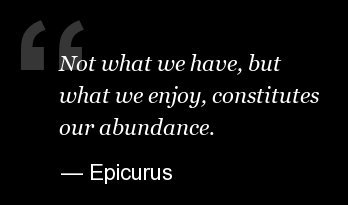