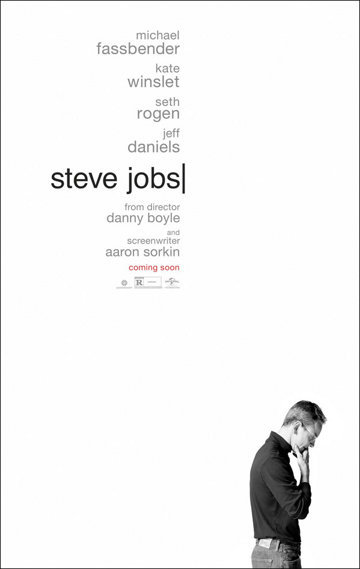 Composer Daniel Pemberton followed up his deliciously swanky movie score for "The Man from U.N.C.L.E." with not one but three different scores for "Steve Jobs," the new Danny Boyle film starring Michael Fassbender as Apple's controversial visionary leader. In an interview, Pemberton said, "There is not one side of music that could reflect Jobs' personality. There is a classical side to him, a rebellious side to him, a technical side to him, a soft side to him, and a cold side to him." He explained that the movie is divided into three acts, and from the beginning he and Boyle agreed that each would have a different musical theme.

Danny called the first act "Vision" in 1984 when Steve Jobs had this vision of what personal computing could bring to the world. Then we have "Revenge" in 1988 when he sets up this company pretty much to get revenge on the people he thought had betrayed him at Apple. And then we have "Wisdom" at the end in 1988, a climax with his own personal realization of what his goals in life have been and what has been slightly misguided. So we had this idea -- let's have three scores. It felt like quite a crazy idea at first. We didn't really know if it would work but it was like --just try it. So I had this idea for the first act to embrace the optimism of the future of 1984 of how technology would save us and bring us this brand-new world. And I wanted to use equipment only from that time and I wanted to have a sound that kind of captured that so I used a lot of synthesizers from that time or before it.

That was interesting because it was working with the limitations of what someone in that era would work with. In 1984 if you wanted to write music electronically you were limited by lots of things like music synthesizers that could only play one note at a time. You suddenly want to get a chord and you're like, "Oh I have to play three times," and that changes the way you write music. And so that affected the first act because I was trying to put myself in the minds of the people of that time.

And in the second act we wanted to write this sort of huge dramatic revenge tragedy opera. It was to reflect the dramatic nature of the setting in the San Francisco Opera House, which is quite an elaborate beautiful building, and the very theatrical showmanship of Steve as both as a conductor and ringmaster. So for that I wrote opera, some orchestral music. That gives a different take on Steve because he was a very complex character.

When we got to Act III the idea then was to try and embrace more of the fact that by 1988 the iMac become everything Steve Jobs had wanted the Macintouch to be. It suddenly allowed someone like me as an artist to express myself in a way that I couldn't immediately on one machine before. So I wrote the whole score on an Apple computer. I used Apple software called Logic. Sitting there writing it, I'm thinking "Wow! The only reason I can do this is because of these achievements that all those people worked on to get me to this point." And so for the third act I wanted to try and start off by writing within the box of the computer, just using the computer. We remix some of these ideas between the acts but that was the starting point of how we approached it.

So, he used vintage technology in Act I, and modern technology in Act III. For Act II, he used "the oldest computer that still exists, which is the orchestra. You give them information which is notation and they interpret that in a way better than any piece of technology has managed to beat. I wanted it to be very pure. So I wanted to reflect the environment of the Opera House and do it the purest way possible. I even had the lyrics translated in Italian so the choir singing in the background are all singing about machines. Like Verdi, but about machines. I like being like Steve Jobs with that focus on detail."

Boyle described the film as "an action movie with words." Pemberton said he thought of Aaron Sorkin's intense, fast dialogue for the film as the "libretto of an opera."

For Pemberton, Jobs' greatest contribution was "on the artistic side of technology. He recognized how he could allow anyone to achieve a greater expression of their artistic potential. This score is a great example of how technology allows me to express myself in so many different ways. Previously I would have to be stuck maybe as just a classic composer or an electronic composer or a sound designer; I couldn't do all three. But the tools that Apple created allow me to express myself artistically in so many different ways. Jobs' machines changed my life and then I got to use them to help tell his story."