A San Francisco man was arrested on suspicion of drunk driving Tuesday morning after his Ford Mustang became lodged in a walkway of the Golden Gate Bridge.

Daniel Micah Soto, 22, was taken into custody shortly after 5:15 a.m., after allegedly driving his muscle car onto a section of the bridge normally reserved for bicyclists.

California Highway Patrol officials said Soto hit the gas and drove through a security gate while making a right-hand turn into a parking lot. Somehow, he trapped his car between a chain link fence and the rail of the iconic bridge, NBC Bay Area reports. 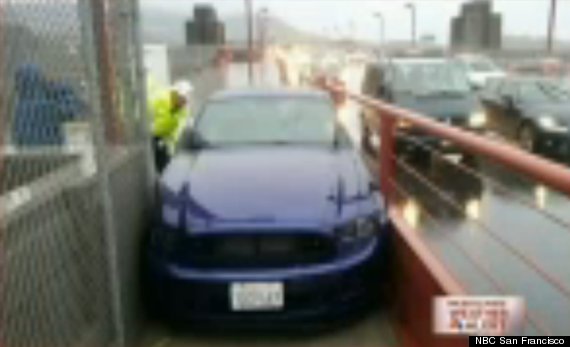 “The driver came down through the parking lot at this incredibly fast rate of speed, got up onto the sidewalk, managed to crash through one barrier and then through a steel gate, go another 400 yards or so before getting himself wedged between the sidewalk rail and a median on the other side,” Bridge District spokeswoman Priya Clemens told KCBS.

Soto was treated at a hospital with minor injuries suffered when airbags deployed during the crash. He was arrested on suspicion of DUI after allegedly blowing .12 on the breathalyzer. No one else was injured.

In order to remove the Mustang, authorities brought in a reaching forklift around 10:15 a.m. to pull it from the walkway and load it it on to a flatbed truck, Clemens told SFGate.com.

“The Golden Gate Bridge crews like puzzles,” she said. “They certainly got a challenge this morning.”