Daniela Pelaez is valedictorian of her class at North Miami Senior High, in the international baccalaureate program with a 6.7 GPA, applying to Ivy League universities, and hopes to become a heart surgeon.

The pair joined a walkout protest planned by fellow students after a judge denied Pelaez' request for a green card Monday and issued a deportation order. Though Immigration and Customs Enforcement have said they will not move on her case until Pelaez' appeal is completed, her plight roused her North Miami High friends to take action -- including making a petition already signed by nearly 5,000 people and staging the protest.

"We've been making posters like crazy," best friend and salutatorian Emily Sell told NBCMiami before joining nearly all 2,600 students in a lap around campus. "I hope this march brings the proper attention to the issue of deportation."

Pelaez came to the United States from Colombia as a four-year-old with her family, who overstayed their visa. Her mother returned to Colombia for medical reasons in 2006; Pelaez now lives with her father, a legal U.S. resident, and her brother, a member of the U.S. military, is a citizen. Limbo awaits if she and her sister are forced to leave the country March 28.

School officials are devastated over Pelaez' situation. "She has a brother whose been serving for two years in Afghanistan and Iraq, so here's her brother out defending the country, and a judge telling her, 'Oh, but you don't deserve to be here,'" North Miami administator Larry Jurrist told WSVN. "It doesn't make any sense."

The Friday morning protest drew not only Superintendant Carvalho but North Miami Mayor Andre Pierre, who told NBC the girl should be allowed to stay. U.S. Rep. Ileana Ros-Lehtinen told Local10 she is writing to ICE on Pelaez' behalf.

Though ICE promised in a statement to "review this matter to determine whether an exercise of discretion is warranted," Pelaez' appeal is no sure thing.

"I've been asked the question before: 'Do I feel American?' or 'Do I believe I am?'" she told NBCMiami. "And I don't think it's a question. I'm American. I know the national anthem. I know the laws. I know what it is to be an American." 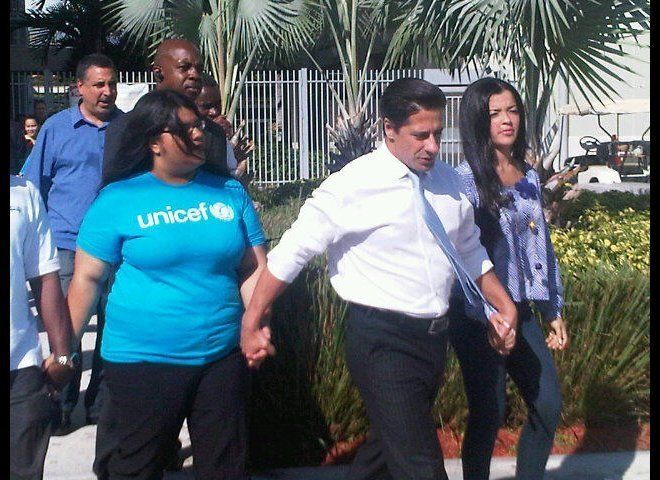