Ever since I launched my own Kickstarter for my Malawian-based novel, Vuto, which tackles women's issues that span nations, I have been contacted by fellow writers, filmmakers and other entrepreneurs who have an interest in similar issues that face women globally. Recently, my interest was piqued by a campaign for a documentary called The Beautiful Game, a film that tackles the impact soccer has on South African women, with a universal message about gender equality worldwide. The women highlighted in the film turn to soccer as an outlet to stand up to the system, challenging gender norms while fighting against violence, homophobia and corrective rape. The project's producer and director, Danny Turken, was kind enough to take some time out to talk about her film and why she chose to go the crowd funding route on Kickstarter to get it made. 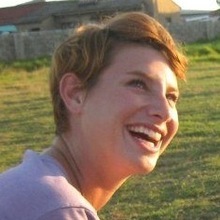 A.J. Walkley: Tell me a little bit about The Beautiful Game. What is the film about and why is it being made?

Danny Turken: The Beautiful Game tells the story about the impact of soccer on women in South Africa, who use their love for the sport to challenge gender discrimination, corrective rape, gender-based violence and deep rooted cultural stereotyping, and demonstrate soccer's ability to transcend all boundaries and reshape the perception of all women throughout the world.

The film follows the City Lads Ladies soccer team based out of Port Elizabeth, Eastern Cape, specifically focusing on five players: Nowie, Ngwenya, Shuffle, Chika and Amy. All of the women have endured painful and troubling pasts, including "corrective rape," physical abuse, poverty and HIV-related deaths. Yet, these athletes represent the women who strive and survive not only throughout the country, but also throughout the world, as they organize and play in soccer leagues and pursue the belief that the sport they love can be a force for social change. 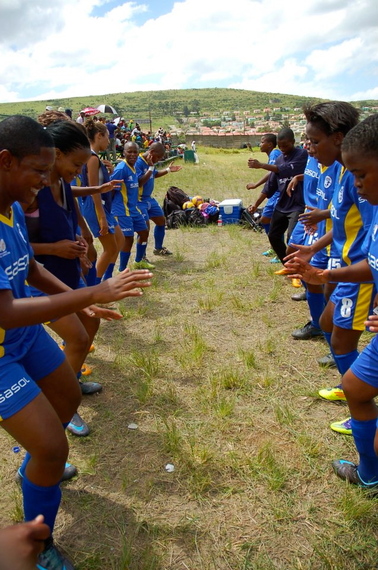 The incredible athletes play not only for the love of the game, but also for the dream that it may help liberate women throughout the world from rape, violence and severe social prejudices. The film explores how the women battle gender norms, homophobia and discrimination in a society that believes that "football makes you lesbian." Despite the daily fear that the sport they love may lead to their death, many young women continue to believe soccer has the ability to challenge the core of sexist beliefs.

A.J.: What kinds of challenges do women in South Africa currently face?

Danny: Seventeen years after the end of Apartheid, the legacies of the country's past -- notably, racism, sexism, xenophobia and homophobia -- continue to rupture South Africa's perception as a "rainbow nation." Women in particular fall victim to confining gender roles, gender discrimination and gender-based violence.

Not only are women expected to be subservient to their husbands and relegated to domestic and reproductive roles, it is also estimated that a South African woman is killed every six hours by an intimate partner and half of all South African women will be raped at least once. More so, women who are openly gay are subject to a worsened fate. First coined in South Africa, "corrective rape" -- a rampant and despicable act -- is a phenomenon based on the mistaken belief that rape can alter a person's sexual orientation and is used as a tool to eradicate lesbians in South Africa and throughout the world, including the United States.

One of the particular issues The Beautiful Game confronts is corrective rape. In an intense and incredibly poignant interview, a City Lads player describes the night she was corrective raped:

"Two guys came in front of me, and they were chasing me, so I started running. They robbed me first. They didn't know that I was a girl. So, when they started feeling me, like, asking for money and phone, this other guy said, 'No man, that's a girl.' So, that's when they came back. Sometimes I kept on asking myself why I didn't tell anyone."

She explains that after being raped by both men she didn't realize she was pregnant until seven months later. After trying to overdose on alcohol and pills, she eventually decided to keep her rapist's baby. An incredible mother, she credits soccer for motivating her to continue living and loving her little boy.

Danny: These incredible women believe, and are living proof, that soccer can deter women from negative lifestyles such as prostitution, drugs and alcohol. As Nowie, the team captain, explains, "Sometimes we playing football, we are running away from other things." 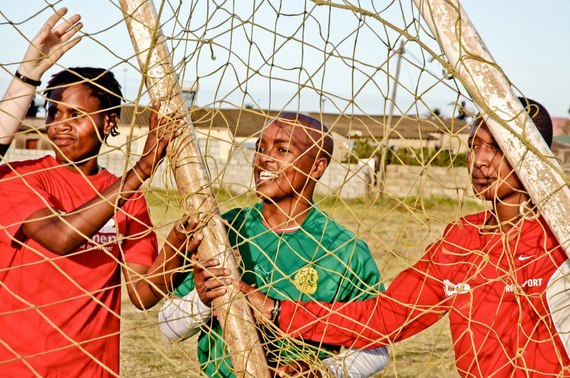 Although the sport is perceived as a game for men, there has been a surge of South African women expressing their desire to play soccer since the establishment of the first official South African Woman's National Football team in 1993. But it doesn't just stop there. Professional soccer star Joanna Lohman, our Soccer Ambassador, sums it up much better than I can. In a Women's Soccer United interview, she says:

"Football is truly the world's game. It has the power to break down cultural and political barriers like no other sport can. Why? It is a simple game, a social game that takes very few resources to play. If you have any version of a ball and a small area of open space, you can play football. This allows it to be played by persons of all income levels and economic strata. The forming of teams encourages communal participation not only on the field but also off. It gives a reason to passionately support a sporting cause. It gives the community a sense of pride and an excuse to unify behind a cause."

It also gives people hope. Throughout history, soccer has served as a tool to unify the Ivory Coast, a country ravaged by civil war, enrich the lives of political prisoners in an Apartheid-governed South Africa, and provide an outlet for men and women across the world to overcome adversity. It is a natural aid to women in South Africa and all women who are standing up and saying no to violence, corrective rape and homophobia. It is a tool of self-expression and also a safe haven. It is a home.

A.J.: Why did you decide to go the crowd funding route for The Beautiful Game?

Danny: Up to this point, the majority of our funding has been generated through private investors. And they are truly wonderful individuals. But the truth is, I'm 27 years old, and I don't know a lot of people who have the capital to invest in a film. I deeply believe The Beautiful Game is a universal story that will resonate among men, women and children regardless of their athletic affinity or ability. As a result, I want as many people as possible to share this film with me and help me finish this amazing project. And crowd funding is the best way to do that.

Filmmaking has changed, and the way filmmakers raise money and develop support has changed. Crowd funding has the ability to green-light films -- through all of the amazing support we have built and continue to build, distribution houses will see a need for our film and make certain it has a fighting chance, so that we can submit to festivals and bring The Beautiful Game to theatrical, domestic and international distribution.

Additionally, we hope The Beautiful Game will motivate viewers beyond the screening. As the players' stories unfold, specifically illustrating the current social issues they are confronted with, we will begin to explore how best to engage in community outreach and audience engagement. Our hope is to educate and inspire through commonality. The athletes in the film and women all over the world have a voice, and it won't be silenced because we won't let that happen. These incredible players are heroes and they do inspire. Hopefully, people throughout the world facing similar social injustices may feel inspired and empowered, and may as a result of watching this film, stand up and take action in their own communities.

We need people to stand up and fight with us globally. Fight for your sons and daughters who are being bullied for their sexuality; fight for your nieces and granddaughters, friends and neighbors who are being beaten or raped by their spouses or significant others; and fight for yourself, because every person is entitled to equality, free from gender-based violence, gender discrimination and social prejudices. Every person is entitled to be free to live a happy and healthy lifestyle they choose to live. The Beautiful Game is more than an exhilarating soccer documentary. It is a call to action.

The Beautiful Game has challenge goals in place upon reaching their minimum goal to further benefit the film and help them share their inspirational story worldwide. To view their stretch goals and to donate to The Beautiful Game today, please visit Danny's Kickstarter page.