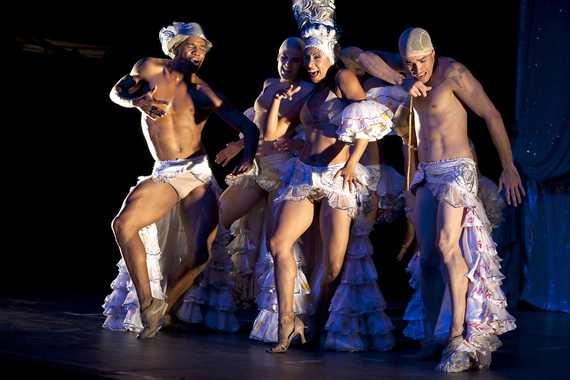 There's a great dance piece hidden within DanzAbierta's Showroom but Susana Pous's choreography was overloaded with extraneous and repetitious ideas. There was some fine dancing with great energy and goodwill from the performers but ultimately it was not enough to sustain the hour-long show. The central theme is a simple metaphor: there's a flashy Tropicana-style floor show taking place onstage while there's a completely different reality backstage, just like in real life. The stage was effectively represented by a rolling proscenium that rotated to change the audience's perspective. Turned sideways, the floor show happened on one side of the stage while the backstage shenanigans were being depicted on the other side. During the performance the mobile proscenium was moved into just about every position you can think of until the concept was fairly exhausted.

The show opened with the six dancers, clad in skin toned underwear, moving in slow motion toward their costumes which were scattered across the floor. They gradually donned pieces of their ruffled white costumes, getting ready to do a show. The costumes went on and off with regularity, most often being taken off "backstage". Once they were all dressed, the floor show started and we quickly learned that it was a sham. They let their performance faces slip to show us that they were only pretending to enjoy what they were doing. It seems to me that there is a downside to letting that performance face falter. The reason I say that is that it is no longer possible to engage the audience with that "onstage" portion of the show because it is all understood to be false. The real show is only happening backstage. It would have been okay if they hadn't kept returning to the floor show and subjecting us to a relentless onslaught of transparently fake smiles that eventually became fatiguing. It would have been more effective to have just Mailyn Castillo, the female lead, betray a false face showing cracks in the façade while the rest of the dancers maintained the fiction of the show.

Unsurprisingly, backstage life turned out to be fairly lurid. It started out with two of the women fighting while the men looked on and then two of the men fought. Then it became all about sex and every combination of girl-girl, boy-boy, girl-girl-boy, etc. was run through until it seemed like everyone had had sex with everyone else at least once and possibly twice. It was simply too much carrying on no matter how attractive you found the chiseled physiques of these fine Cuban dancers. It would have helped the piece to focus on just a couple of the pairings and let them have more narrative definition. By letting them develop, the audience would have more time to invest in their stories. Instead it was jumbled as they randomly paired up and split up, put on and stripped off costumes and kept up a frenzied pace.

There were some powerful moments depicting a performer's essential loneliness. There was a striking visual moment when Castillo segued into a fantasy in which she was dancing atop a Carnaval float. She was ecstatically happy until it was revealed as imaginary and then her despair was palpable. As a work of choreography there were other issues. It appeared that not all of the steps were choreographed and that left a number of the in between steps orphaned. For example, it hampered the effectiveness of a duet which I was enjoying very much. It was happening "backstage" while the floor show was going on and the two dancers were moving together very well. They came out of one interesting lift and then suddenly moved into something else without a clear idea of what steps they were doing and no effective transition. It was visually jarring. Leaving things like that to chance is a mistake because it breaks the illusion of continuity. It happened frequently throughout the show and I came to believe that it was a case of simply not finishing the work.

Given just one show in the Joyce Theater's mini Cuban Dance Festival, DanzAbierta got sold short. It seemed that Ms. Pous stretched her Showroom into an evening length piece when the central idea really only supports about twenty minutes worth of dance. I would like to see some different repertory from this company of strong and engaging performers as I believe they are capable of much more.