Many women in their 70s spend their spare time with grandchildren or quietly pursuing hobbies and volunteer work.

But Daphne Belt is no typical 70-something. The British five-foot-two-inch powerhouse is planning to undertake a triathlon every day for the 75 days building up to her 75th birthday on August 14, 2014. The aim? To raise money for a children's hospice called Chestnut Tree House in Sussex, England.

"I first went to visit the local children's hospice several years ago. I saw such sadness and love there, it moved me to tears," she told the Daily Mail. "I thought 'I've got to do everything I can for these brave children and their families'."

For most people, the idea of 75 triathlons would be daunting. But Belt already has powered through more than 250 triathlons and 18 Ironman challenges (2.5-mile open water swim, 112-mile cycle and a full 26.2-mile marathon run).

Belt began exercising shortly after her 50th birthday, when she was so overweight she had difficulty even climbing the stairs, she told The Guardian in 2003.

She began jogging -- slowly -- and then learned to swim by watching her husband, Steve. She also switched up her diet; less fat and more fruit. Within a year, she completed her first 10-mile run.

When not swimming, biking and running, Belt works with her husband running an antique import/export business.

Belt, of course, isn't the only older woman making extraordinary athletic strides. Only recently, Diana Nyad became the first person to swim from Cuba to Florida without a shark cage at the age of 64. 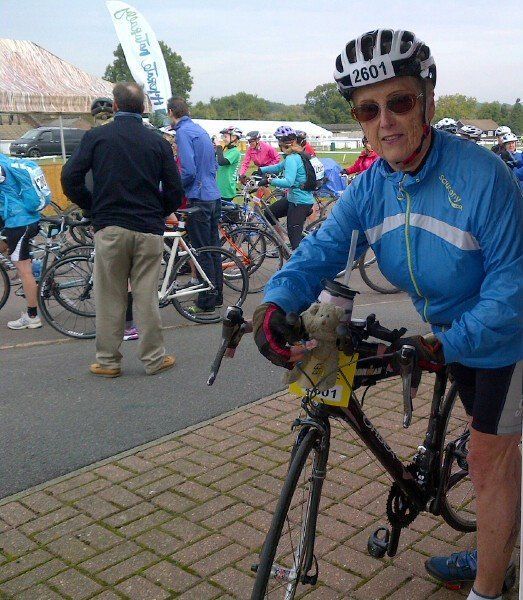 1 / 5
Daphne Belt at the start of a cycletta near Brighton Sussex recently.
Courtesy Daphne Belt