Fait accompli (a thing that has already happened or been decided before those affected hear about it, leaving them with no option but to accept) 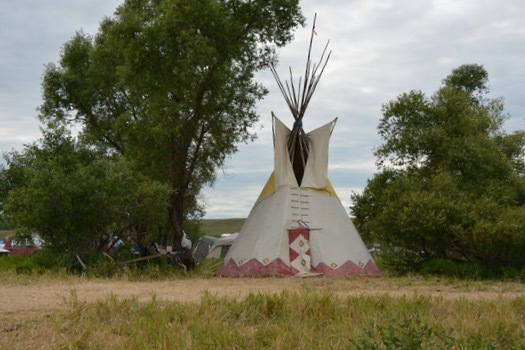 Energy Transfer Inc. and invested owners of the proposed North Dakota Access Pipeline (DAPL), have begun psychological warfare against peaceful protestors near the Standing Rock Sioux Reservation. It will be a challenge for the persecuted to stay vigilant, stay strong and stay true to their beliefs. So far the People have remained nonviolent in the face of dog attacks on their bodies and their horses, while facing extreme psychic trauma in the form of desecration of graves and sacred sites. On Saturday "sacred places containing ancient burial sites, places of prayer and other significant cultural artifacts of the Standing Rock Sioux Tribe were destroyed by Energy Transfer Partners," Tribal Chairman David Archambault II said in a press release.

The tribal Chairman also has an op-ed in the New York Times that clearly lays out the issues facing Standing Rock.

Acting with a slap in the face to the judicial process, Energy Transfer Inc., in partnership with the Enbridge Corporation and Marathon Oil, bulldozed a two mile, 150 feet wide path through land currently being contested in Federal Court. Meanwhile, ancient cairns and stone prayer rings can never be replaced.

Ask the question: How would you feel if a construction company bulldozed a family plot in a local cemetery that contained the remains of you family?

"We're days away from getting a resolution on the legal issues, and they came in on a holiday weekend and destroyed the site," said Jan Hasselman, attorney for the Standing Rock Sioux Tribe. "What they have done is absolutely outrageous."

The site at the conjunction of the Cannonball and Missouri Rivers is not the only historic site at risk. Other culturally and historically significant sites will be damaged or destroyed as the DAPL crude oil pipeline snakes 1168 miles through North Dakota, South Dakota, Iowa and Illinois.

Immediately recognizing the need to stop this process, on August 4, 2016 the Standing Rock Sioux Tribe along with attorneys from Earthjustice filed a motion with supporting documents for a preliminary injunction against the DAPL. The U.S. Army Corps of Engineers (USACE) issued the initial permitting for the pipeline. Federal Judge James E. Boasberg rejected the motion to ignore the injunction request and ordered a status conference on September 14, leaving room for discussion after his ruling September 9.

That fact that the corps ruled in favor of the DAPL routing to begin with is beyond puzzling, since not one, but three Federal agencies opposed it. The Environmental Protection Agency, the Department of the Interior, and the Advisory Council on Historic Preservation have all said that the USACE had not done an adequate Environmental Impact Statement (EIS), mainly with regard to drinking water.

Most recently, representatives of the United Nations Permanent Forum on Indigenous Issues said the same, and that the Tribe must have a say.

There is separate discussion about the corps illegally discharging into federally protected wetlands, but the effort to stop the fait accompli of destruction of historical and sacred sites is the main issue here. One needs look no further than violations of the National Historic Preservation Act (NHPA) by the permitting agency, the USACE. These egregious violations and the consequence came into full view this Saturday.

Reading through the 53 page initial "motion for the U.S. Army Corps of Engineers to withdraw Nationwide Permit 12 as applied to the Dakota Access Pipeline, and to withdraw verifications issued on July 25, 2016 for the Dakota Access Pipeline to discharge in federally regulated waters at 204 sites along the pipeline route," is tedius, yet informative. Everyone connected with the protest should study it. One is struck by the testimony that destruction of ancient burial grounds and ceremonial sites constitutes "irreparable injury to the Tribe and its members."

The regulatory process remains incomplete, numerous lawsuits have been filed against DAPL and the corps, and significant public controversy surrounds the project. Yet Energy Transfer Inc. seeks to render the legal dispute moot by finalizing construction before the Tribe can be heard. The dog attacks and bulldozing over the weekend were an attempt to force a violent confrontation, but the protestors held fast to their peaceful intent in spite of extreme psychological and physical duress.

The Standing Rock Sioux, as a successor to the Great Sioux Nation, is party to the Treaties of Fort Laramie 1851 and 1868. The 18,000 enrolled members view the water and ancestral lands as sacred entities. The tribe learned that the original configuration of the DAPL pipeline was upstream of Bismarck, but was later moved to one half mile outside of the reservation's current and "official" boundary.

The "main camp" with the majority of the protesters is located on U.S. Army Corps of Engineer's land just north of the Cannonball River. The North Dakota Department of Emergency Services says it is not on tribal property, but the original treaty line was moved in 1889, so if you support broken treaties, you could call it illegal. In this case legality is in the eye of the beholder. The bulldozers and attack dogs wrought their destruction near the borehole site, which is a main focus of the request for a preliminary injunction.

The pipeline is scheduled to run under Lake Oahe, and Lake Oahe is where we begin.

On February 17, 2015 the USACE sent a letter to the Tribal Historian Preservation Office (THPO).


The USACE permitting process is the only Federal action associated with the project and therefore USACE is solely responsible for conducting consultation with interested Tribes in accordance with Section 106 of the National Historic Preservation Act. The purpose of this letter is to initiate Section 106 consultation and review, determine your interest in consulting on this undertaking, and to gather information that will assist the Corps in identifying historic properties.

In several subsequent responsive emails, the THPO requested a full archeological investigation. By August 19, 2015, the USACE had still not responded.

On September 15, 2015, the tribe got a form letter asking if it wanted to participate in the National Historic Preservation Act process, and was given a month to respond.

The THPO responded and emphasized that the tribe, thus far, was not allowed to participate in Section 106 of National Historic Preservation Act.

Several more months went by with no response and then a lie was used by the USACE to obfuscate and delay.

The corps instead published a draft Environmental Assessment (EA) in mid-December 2015 for Lake Oahe and "falsely stated that THPO had indicated no impact to tribe," according the docket filed in Federal Court.

But, like Mark Twain once said, "If you tell the truth, you don't have to remember anything."

The Corps had already received critical letters from USEPA, US Department of Interior and ACHP regarding water and historical preservation oversights.

Meanwhile tribes in Iowa and the Osage Nation in the Omaha District were experiencing the same stonewalling from the USACE.

Finally, the Omaha District Commander for the corps toured the borehole site on Lake Oahe on February 29, 2016.

A follow up by archeologists from the corps and the Tribe on March 7, 2016 witnessed places where moles had pushed dirt to the surface containing prehistoric pottery shards, pieces of bone, flint and tools. Even the tribes were unaware of these sites.

Shockingly, the corps continued the lie and wrote an assessment on April 22, 2016 that "no historic properties" were affected by the Lake Oahe decision.

Moles vs. Machines (an aside)

Readers can decide for themselves if moles are bringing artifacts to the surface all over the area of DAPL at Lake Oahe, is it really possible that NOTHING was found at the bore hole site? USACE did not find one, not even ONE, artifact near the future bore pit location? Stretches the imagination. The American Auger DD440T is the machine of preference for this project.

Then of course we have the moles. No schematic is necessary, but this member of the insectivores is certainly efficient and truthful.

Advice From Someone Who Fought the Corps and Won

In a very interesting op-ed, "I triumphed over the Army Corps of Engineers and the Sioux Nation can, too," the founder of levees.org, Sandy Rosenthal, offers some sage advice to the Sioux Nation direct from New Orleans. Here are some edited comments:

Don't give up. The corps may appear disconnected from reality, but in fact there is most definitely a behind-the-scenes plan. Meanwhile, the corps stalls. They stall and stall. The corps expects you to get tired and frustrated. Accept that the corps will never formally admit they made a mistake. Recognize that personal attacks are a sign you are winning. Personal attacks and ad hominem criticism are a sure sign that you're asking the right questions. They are evidence that you are a very real threat. Stay the course.

On July 25, 2016, the corps issued the final NWP 12 verification at 204 sites in four states, including Lake Oahe. The corps did not mention 106 compliance but allowed a farcical "Tribal Monitoring Plan" that allowed tribal members to watch construction.

In a bait and switch, the final EA and Finding of No Significant Impact (FONSI) acknowledged the risk of oil spills, spill response and mitigation.

This has not worked out very well on other spills.

Still, the corps found "no direct or indirect impacts to Standing Rock Tribe," even though spills are a risk and some would say a probability for the people downstream. Bismarck must be breathing a sigh of relief about now, since the pipeline was not placed in their backyard.

The corps insists that APE (Areas of Potential Effects) for Lake Oahe crossing are composed of "only" unsupervised bore holes, stringing and staging areas, and access routes, according to the corps. Never mind the miles of unmapped and undiscovered remnants of the mighty Sioux Nation.

One Setback and Another Filing

U.S. District Court Judge Daniel Hovland disagreed and allowed construction to continue. On Thursday, the judge again refused to stop construction. He's expected to rule within the next two weeks on whether the company should've gotten tribal permission and the project can move forward.

The Standing Rock Sioux Tribe says it "surveyed a portion of the Dakota Access Pipeline route this week and discovered multiple graves and other significant historical sites not previously identified," according to Indian Country Today.

Mentz writes that the survey located "at least 27 burials, 16 stone rings, 19 effigies and other features in or adjacent to the pipeline corridor just north of the Standing Rock reservation."

In a sad conclusion that brings us all up to date, this is the area bulldozed by Energy Transfer, Inc. -- the very definition of psychological and physical warfare-- the use of dogs, pepper spray, and desecration of sacred grounds.

Over a period of days spent at the camps last week, I learned about the Bird Song. According to Native spiritual beliefs, the bird song was given to the people to teach respect and empathy. Instead of bulldozing their way into getting what it wants, perhaps DAPL interests might want to try listening to a people who have experienced extreme loss and generational trauma over the last 500 years. They are still here. the people can endure much, and remain peaceful.

This is more than the security forces for Energy Transfer have demonstrated.