Abby Whelan seems tame when compared to her co-Gladiators on "Scandal." She doesn't kill or pull out her co-worker's teeth. She doesn't engage in affairs with the president. But as Olivia Pope's right-hand private investigator, Abby, played by Darby Stanchfield, is often the only person at Pope and Associates who will tell it like it is, no sugar-coating necessary. With three episodes left in Season 3, her job is about to get bigger.

This season, viewers have watched Abby fall in love with U.S. Attorney David Rosen and take on a more demanding role within the Gladiators. In the April 3 episode, "The Fluffer," Abby becomes Olivia's proxy in the White House, Stanchfield told HuffPost TV. "Olivia, at the end of this season, starts to heavily rely on Abby and confides in her and Abby professionally begins to gain some real success," she said. "Let me tell you, this episode felt like I was guest starring on a different show, being in the White House."

Below Stanchfield talks about how Abby's look changed to reflect her new outlook on work and what it's like to put on the white coat.

"Scandal" fans always talk about Abby's style evolution. You went from being buttoned-up to pretty sexy. How has your character transformed with her new look?

This is kind of a perfect story to tell you about the first season. The propmaster asked me to pick out a watch to wear for Abby. I picked out the most unstylish, detective-looking kind of watch I could find. That was really the mentality; Abby’s clothes were all about work and the layers were about hiding because when we meet Abby, she’s very snarky and defensive, just fresh off an abusive relationship.

Throughout Season 2, we start to see her become a little more feminine. In Season 3, she gets a smokey eye and her hair loosens up into a curl. It’s an outward expression of her finding love in Rosen. She gains confidence in herself as a woman. She spends a little bit more time in front of the mirror and puts all of that confidence into her workplace. Abby’s style continues to soften and evolve right up until this episode, actually where Abby suddenly becomes Olivia’s proxy.

Do you also think that this has to do with her trying to move on from the abusive relationship?

Absolutely. Metaphorically, she’s shedding that like a bad hairdo or like a bad dress. She’s shedding that skin. She’s moving on even though it’s still very much a part of who she is. One of the things I love about this character is she doesn’t spend any time feeling sorry for herself. She has a lot of quirks and she’s very judgmental and sees the world in black and white. But her past doesn’t prevent her from being a fully realized woman.

We keep hearing that we'll learn more and more about Harrison's backstory this season. But we haven’t learned everything there is to know about Abby. Will we get to dive deeper with her soon?

You know, I keep hearing rumblings about that coming up, but we don’t get into it this season. But there is this really great forward story that begins to unfold for Abby. Olivia relies on her more. In the last three episodes, we see her literally transform from an investigator into a political operative. 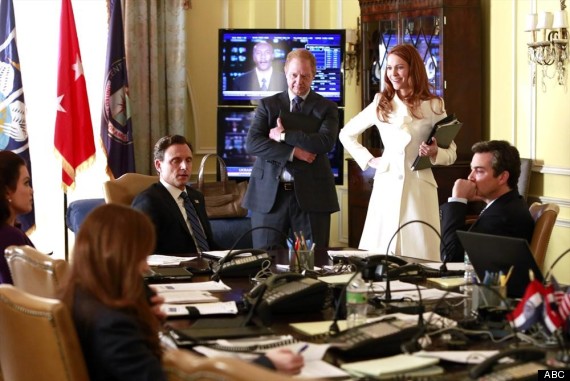 Early in the show we learn that Abby and Olivia have very different political views. Abby is staunchly liberal, so how does that come up when she becomes a political operative?

Abby chooses loyalty to Olivia over her own political views in terms of what she does, but she has a fantastic pillow talk scene with David Rosen in which it all comes out. You get a moment to see Abby when she’s in her intimate space with her boyfriend and she can say what’s really on her mind. When she’s at the White House she has a great monologue when she’s with the president and the first lady, Cyrus and the vice president and she’s really trying to keep up this appearance of Olivia. She’s trying to be Olivia Pope. She’s even in a white coat. She’s trying to channel her Olivia Pope. But she does fly back into a snarky, judgmental moment for a second before she snaps back into Olivia.

Does her relationship with Rosen based on what happened to James?

There’s been this ongoing dynamic for a while. David continues to get into trouble and Abby continues to get him out of trouble to save his life. That’s a continuing theme as we move forward, but they’re definitely the most normal couple on the show. They continue to stay pretty solid except there’s a big crack that gets in the boat by the end of the season.

Abby's had mixed feelings about Quinn all along. With everything that's happened to Quinn this season, how does Abby feel about her returning to the Gladiators?

You know what’s kind of fascinating? I can make up an answer, but in all honesty, at that time Abby doesn’t even know what Quinn’s been doing. We haven’t had a scene together in quite a while. Let’s put it this way: she does see Quinn again and she’s just as snarky as ever. There’s no holding back with Abby.

That’s what I love about Abby. She’s got the best one-liners and zingers on the show. What’s it like to read a "Scandal" script for the first time?

It’s so fun. Every time we have a table read, it feels like Christmas morning to me. It’s like opening up new gifts, fun scenes in which I get to play Abby. Most of the stuff she says is a complete riot. I’ve played Abby long enough where this character feels very natural to me.