One restaurant operator has just given us a small window into a huge problem with the American economy.

Darden Restaurants, the Orlando-based purveyor of sit-down food chains, announced its fourth-quarter earnings on Friday, revealing that some of its restaurants have done much better than others in the past few months.

What was the major difference between success and failure at its restaurants? The diners. Restaurants that serve the well-off are thriving, while those that serve the rest of us are struggling, in a microcosm of the broader economy.

Struggling are Olive Garden and Red Lobster, which are largely geared toward middle-class customers, who have been squeezed during the recession and slow recovery. Families with young children cut back on restaurant spending during the downturn, and they haven’t come back, according to a recent survey by restaurant research firm NPD Group.

Same-store sales, a measure of performance at restaurants open a year or more, dropped 3.5 percent at Olive Garden and 5.6 percent at Red Lobster over the quarter. At Long Horn Steak House, Darden’s middle-of-the-road steak chain, same-store sales rose 2.4 percent, but traffic -- the measure of how many people are actually coming through the door -- dropped over the quarter.

On the other hand, at Darden’s Capital Grille, where most dinner entrees fetch more than $40 each, same-store sales increased 4 percent over the quarter. That makes sense, too: Over the past few years, the kinds of people who can afford a fancy dinner have seen their incomes grow, even as everybody else's incomes have stayed flat.

Still, Darden is hoping it can convince pinched diners to spend again at Olive Garden by re-making the chain in the image of other trendy restaurants. They’re offering convenience through online and tablet ordering, more choice and customization options for their various combo meals, faster lunch service and even tapas -- all while still emphasizing the value of a meal that comes with unlimited salad, soup and breadsticks.

The hope is that they’ll attract the all-important “millennials” and “multi-cultural households” who are doing all their eating at Chipotle and Panera right now, Darden chief operating officer Eugene Lee said on the company’s earnings call.

Seafood chain Red Lobster has struggled for years, thanks to a suffering middle-class, along with changing dining habits and fluctuating seafood prices.

Darden plans on selling Red Lobster to boost performance. “We don’t believe that Red Lobster is as well-positioned as our other brands for the future that we see,” Darden’s CEO Clarence Otis Jr. said on the company’s earnings call.

Darden's performance over the past few years, with and without Red Lobster. 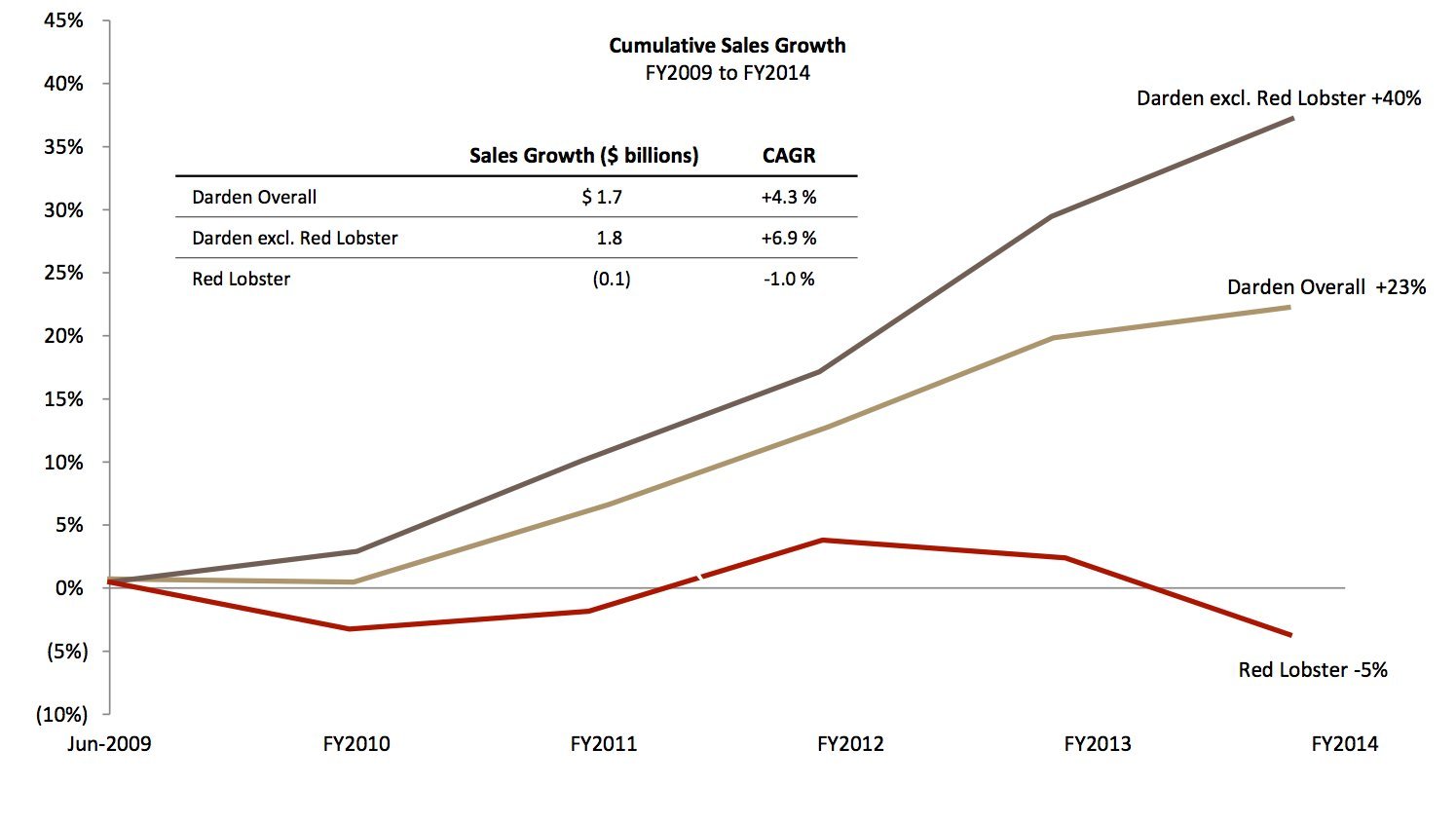