As I contemplated writing a blog with this title I presumed that it had probably already been done. Boy was I right! Google bubbled out dozens of prior examples including a HuffPost blog by Jason Derr in the religion section of Huffington in 2011. Almost all the prior statements, including Derr's, had an ecclesiastical frame of reference. Except one by Buckminster Fuller. In 1970 he wrote a book entitled "I seem to be a verb; the environment and man's future." (1) In it he invokes an evolutionary perspective to mankind's role in the Universe. I resonate with this viewpoint.
As a physician profoundly concerned with mankind's place in the Grand Process of Existence I probe deeply into basic mechanisms. In this regard two adjacent questions emerge: what is life? and what is health? Both are similarly answered with verbs as mechanisms rather than nouns.
Such is a profound philosophic point.

I find its understanding expressed in a paper written by my good friend Richard Strohman who was an elegant professor of biology at Berkeley. In his paper in Nature Biotechnology (2) in 2003 he pinpoints the fundamental issue when he observes that we have subliminally substituted agents for agency. He calls this an "epistemological error of great moment." What this means is that the human mind has a much easier time grasping things than processes. Our cognitive capacity seems focused on commoditizing everything. "Being" is much easier to conceptualize than "becoming."

The consequence of this is closely aligned in my opinion with money. It is impossible to place a monetary value on process. It is very easy to put a price on product. We fix our attention on the agents rather than the agency. The dynamics inherent in this reality were definitive in the conclusions reached by Schrödinger in his lectures "What is Life?" In them he linked the physical processes of life to the laws of thermodynamics, and particularly the energy exchanges that are implicit. Life is a verb, health is a verb because they depend on energetic interchanges, not on particulate elements such as genes.

I have conformed this perspective into an icon. The familiar depiction of the Tao as intersecting black-and-white halves of the whole I feel is wrong, because it implies the specific separation of the nature/nurture interface.

The clear intersection of the two worlds is undeniable. The two are intimately connected and constantly interconnecting. To me the boundary is very diffuse. The color of that icon is speckled gray, meaning that the two are so inextricably related as to be not separable. 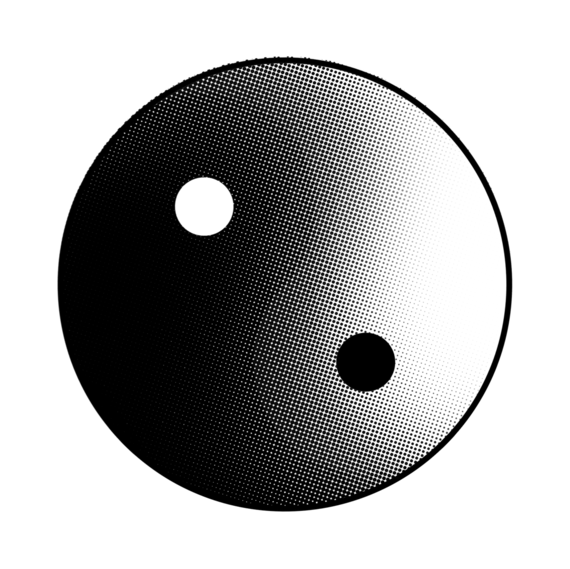 So it is my conclusion that God is a verb, health is a verb, life is a verb. I believe that if we could focus the human cognitive antenna on this way of seeing it would have benefits of cosmic proportion.

More:
godhealthy livingTaoHealthLife
Newsletter Sign Up
The essential guide to taking care of your mind and body
Subscribe to HuffPost’s wellness email
Successfully Subscribed!
Wellness delivered to your inbox