Harvey Dent's transformation into Two-Face sends the gloomy vibe of "Dark Knight" into hyperdrive, plunging the film into a deeper level of despair. Once Gotham's "white knight," the district attorney (Aaron Eckhart) has half his face blown off in a gasoline fire.

That, coupled with the loss of his girlfriend, prove too much for Dent to bear, and he turns evil. It's a transition that's made believable by the amazing and difficult-to-watch graphic effects on Dent's face. Eckhart's handsome mug is made so grisly that it's hard not to look away at the first sight of his transformation. Four years after the film came out, it's still uncomfortable to see.

In a sizzle reel posted by special effects guru Emmet Griffin (which resurfaced on Reddit recently), the viewer is treated to a digital behind-the-scenes look at Dent's transformation. Watch above to see not only Two-Face, but also the lion from the adaptation of The Chronicles of Narnia and many other films. Griffin's work is intricate and well-layered, striking a realism that moviegoers are likely to recognize.

Here's what the villain looked like, from the cover of an issue of Batman. 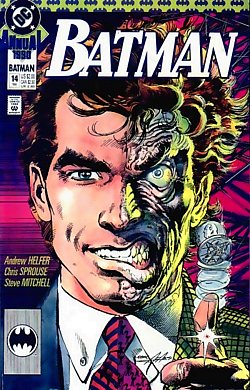