The campaign to blunt the power of the Consumer Financial Protection Bureau included the usual monetary contributions to key lawmakers and hiring of well-connected lobbyists. But one little-known nonprofit connected to a network of online payday loan companies also leaped into the new world of influence-peddling post-Citizens United.

The Supreme Court's 2010 ruling led to the creation of super PACs and nonprofit groups so closely tied to congressional leaders that they regularly receive large contributions from those seeking a foot in the door. Online Consumers Network, an arm of the online payday loan empire run out of Missouri and Colorado by brothers Cole and Del Kimball, was one who came knocking.

In 2012, at the height of the payday loan industry’s lobbying campaign to push back the Consumer Financial Protection Bureau, Online Consumers Network contributed $100,000 each to American Action Network, a nonprofit closely connected to House Speaker John Boehner (R-Ohio), and YG Network, a nonprofit linked to then-House Majority Leader Eric Cantor (R-Va.). Both of these dark money groups spent millions on the 2012 election without disclosing their donors. The contributions were uncovered in a tax return filed by Online Consumers Network. 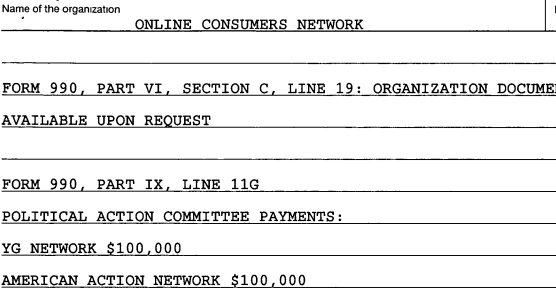 At the time, the payday loan nonprofit employed top GOP strategist Scott Reed as its lobbyist. Following the Citizens United decision, Reed was among the Republican operatives whocreated the infrastructure of super PACs and electorally active nonprofits that now boosts the party. American Action Network and Karl Rove's American Crossroads and Crossroads GPS were born. Reed himself founded the now-defunct Commission on Hope, Opportunity and Growth with money from the financial, health insurance and energy sectors.

Reed, who did not respond to multiple attempts to contact him, is not just a lobbyist these days. He's also a major political adviser to the U.S. Chamber of Commerce, which coordinates independent group spending with Republican establishment groups -- like those receiving money from Online Consumers Network.

“Citizens United opened the door for the unparalleled participation by corporations at the financial level,” Reed observed to National Journal’s Peter Stone in 2010.

As Online Consumers Network made large contributions to American Action Network and YG Network, it was lobbying to block federal regulations that threatened its master's bottom line. The House Financial Services Committee had bottled up legislation sought by the group. Since bills move only at the behest of party leadership in the House, six-figure contributions to leadership-linked nonprofits are often seen as a way to get the ball rolling.

Of course, these efforts cannot always be successful. The lobbying campaign by Online Consumers Network may have exploited new avenues of influence, but it likely ran aground due to an old-fashioned problem: the across-the-board unpopularity of the payday loan industry.

Payday loans are small-dollar, short-term loans provided to consumers who can't access traditional banking or credit resources. The loans tend to come with high interest rates, and most borrowers get caught in a debt trap trying to pay back the loan and the soaring interest.

The industry operates through storefront operations and, increasingly, online. By crossing state and international borders and often setting up on Indian tribal lands, the online operations are able to evade local laws meant to curb usurious and fraudulent practices. These practices have made it uncomfortable for many politicians to side with the industry.

Back in 2012, the Online Consumers Network -- and the payday loan industry in general -- was backing legislation to change the management structure of the Consumer Financial Protection Bureau from a single presidentially appointed director to a bipartisan board.

But payday lenders, particularly the online businesses, were putting most of their weight behind a bill to charter nonbank lenders, according to Gary Kalman, director of federal policy at the Center for Responsible Lending, a nonprofit critical of payday lending practices. The legislation introduced by Rep. Blaine Luetkemeyer (R-Mo.) in 2012 would have allowed the Office of the Comptroller of the Currency to federally charter nonbank lenders like those offering payday loans, a move that would have pre-empted more restrictive state regulations on such loans.

“The charter bill was a very serious push,” Kalman said. “There was real lobbying on that.”

The legislation stalled, however, after receiving a hearing before a House Financial Services subcommittee. Those lobbying against the bill, including the Center for Responsible Lending, had managed to strip away a significant amount of Democratic support and to organize opposition that was ready to attack if the bill moved further.

“Given everything that was going on, the leadership decided they had bigger fish to fry and the Democrats were ready to pounce on it,” Kalman said.

Neither of those bills would pass in that Congress or the next.

While Online Consumers Network was putting money into the coffers of politically connected nonprofits, it may have been making a less savvy financial move: allegedly stiffing Reed and his consulting firm, Chesapeake Strategies. On Dec. 31, 2014, Reed sued Online Consumers Network and Cole and Del Kimball, contending that they had failed to pay his monthly $25,000 retainer beginning in July 2012.

In his effort to get payment from the Kimball brothers, Reed’s lawsuit paints Online Consumers Network not as an ordinary nonprofit or business trade association, but as an arm of an allegedly fraudulent business empire run by the Kimballs. “There is such a unity of interest and ownership of OCN that the separate personalities of OCN and Cole and Del do not exist,” the lawsuit argues. “OCN is a corporate fiction; to allow it to persist would promote injustice and protect fraud.”

A call to the phone number listed on Online Consumers Network's tax return led to the voicemail box of Cole Kimball at Maxwell Marketing. Emails to Cole and Del Kimball were not returned.

The Reed lawsuit has not been the only bad news for the Kimballs. Their business empire has taken a major hit from the regulatory push they sought to prevent.

In 2013, the Justice Department launched Operation Choke Point targeting the payment processing services offered by banks to nonbank companies that were potentially or actually engaged in fraudulent billing practices. Online lenders have been repeatedly accused -- in and out of court -- of using the payment processing provided by banks to dock borrowers’ accounts even after they think they have paid back their payday loan.

That same year, Missouri Bank & Trust, the main provider of payment processing to the online loan business operated by the Kimballs, was sued by consumers for aiding fraudulent online payday companies. The lawsuit, combined with the federal government’s crackdown, led Missouri Bank to stop providing services to any online payday lender. The Kimballs’ business, along with dozens of other Kansas City-based online lenders, faced imminent collapse as it struggled to find another bank to provide those services.

Soon after, Del Kimball and another business partner, Sam Furseth, were sued by eData Solutions, an online payday loan services provider operating out of Indian tribal territory, for failure to pay its bills.

LTS Management, the main lending company associated with the Kimballs in Kansas City, began to lay off staff in 2013, according to alt-weekly The Pitch. Del Kimball and Furseth told The Pitch in 2014 that both LTS Management and Glacier Management were folding.

Controversy and collapse did not stop Online Consumers Network from lobbying.

In 2014, the nonprofit retained former Freddie Mac lobbyist Robert Mitchell Delk to lobby Congress on yet another bill to reduce the power of the Consumer Financial Protection Bureau. The same bills that Online Consumers Network sought in 2012 have already been reintroduced in the current Republican-controlled Congress.

But now they are racing against the bureau’s January announcement that it would produce new rules for payday lenders this year.

PHOTO GALLERY
Politicians Then And Now