Dark Skies, which is out in theaters now, was not screened early for critics. This is never a good sign. If nothing else, however, it does pique my curiosity. What am I not supposed to see? I must know!

On Thursday night, I purchased a ticket to the midnight showing of Dark Skies (along with fellow movie-writing folk Matt Singer and Jenni Miller) at the AMC Loews Village 7 in Manhattan's East Village. Dark Skies is the story of ... well, I still have no idea, to tell you the truth. If you must know, perhaps there's a nice summary on its Wikipedia page. Yes, I tried to see Dark Skies early on Friday morning, but things did not go smoothly. Along the way, I kept a running diary of what happened.

11:45 p.m. I live in one of the largest metropolitan areas in the world. Here is the line for tickets to the midnight screening of Dark Skies. 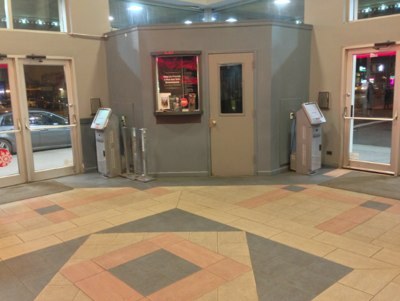 11:54 p.m. I live in one of the largest metropolitan areas in the world. Here is what the theater looks like at the midnight screening of Dark Skies. 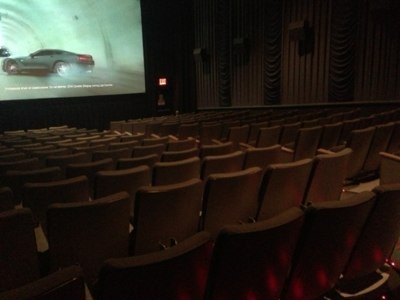 11:57 p.m. Strangely, a large group of people just showed up for Dark Skies all at once, yet very few seem to know each other. Including us, there are at least 12 souls in New York City who wanted to see Dark Skies as soon as humanly possible.

12:01 a.m. Just as the lights went down, Matt Singer had to close the theater door himself. That's never a good sign for those who hope that there are movie theater employees here to make sure things go as smoothly as possible.

12:06 a.m. So, after the 10-second AMC fanfare played, we've now been sitting here for five minutes staring at a blank screen.

12:06 a.m. Maybe this just is Dark Skies. Maybe this is why no one wanted us to see this movie.

12:09 a.m. The lights are still off in the theater and there's still nothing on the screen. I must say, the rest of the crowd is surprisingly calm considering that we all paid $13 to stare at literally nothing.

12:11 a.m. We are on the seventh floor of the theater, there are no theater employees in sight and the screen is still dark.

12:12 a.m. I called the theater and I was just told by whomever answered that what was happening is normal and the movie would start at 12:15. I think she thinks I'm complaining about the trailers. I literally said, "I go to a lot of movies, the screen is blank." Her response, "That's normal. Call back later if nothing happens." 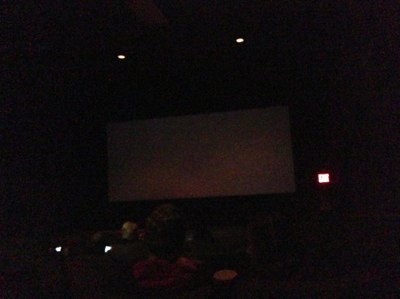 12:20 a.m. Honestly, I hope that what I'm looking at actually is Dark Skies. I hope Dark Skies secretly is performance art. "How long will people just stare at a blank screen before they leave?" Well, so far, it's 20 minutes.

12:21 a.m. If all of a sudden the Dark Skies credits started rolling, I would not be surprised.

12:23 a.m. A man who works for AMC and seems nice has just announced that, "We are having some issues getting the movie on the screen." We are told that the trailers will be skipped to make up time. In my life, I've only heard commercial airline pilots and, now, a movie theater employee working the midnight shift boast about "making up time."

12:30 a.m. Zero Dark Thirty is playing in the theater next to ours. I hope that after the CIA is finished locating Osama bin Laden in that movie, they'll then direct their efforts to look for this particular copy of Dark Skies.

12:34 a.m. A loud sound just caused every single person in this theater to jump out of their seats. It turns out that it is the AMC fanfare again. Regardless, it appears that we will finally be seeing Dark Skies.

12:42 a.m. It's official: Our midnight screening of Dark Skies is canceled.

12:45 a.m. No one in this theater seems too particularly disappointed that Dark Skies has been canceled. Which is odd, considering that all of these people went out of their way to see this movie at midnight.

1:02 a.m. I just reread my first entry and I still have no idea what Dark Skies is about.

1:15 a.m. Jenni, Matt and myself have all concluded that Dark Skies does not exist. It's a hoax to test the perseverance of the human spirit. We all failed.

(Update: Singer now has his own post about this midnight showing up at Indiewire.)