Are you excited about the return of Jar-Jar Binks and pre-pubescent Anakin Skywalker, this time in 3D? Belgian fast food chain Quick is. The company just announced that it will be offering Phantom Menace-themed burgers for a limited time in anticipation of the imminent re-release of Star Wars: Episode I in 3D movie theaters.

The promotional burgers, which will be available until the beginning of March, come in three varieties: Jedi, Dark and Dark Vador. The first two look more of less like normal double burgers. The Dark burger, which is associated with Darth Maul, seems to have something like everything bagel seasonings on its bun. And the Jedi burger has some kind of mysterious white topping between the beef patty and the bun. (Eater speculated that it might be marshmallows. Yuck.) Here's the ad for those two: 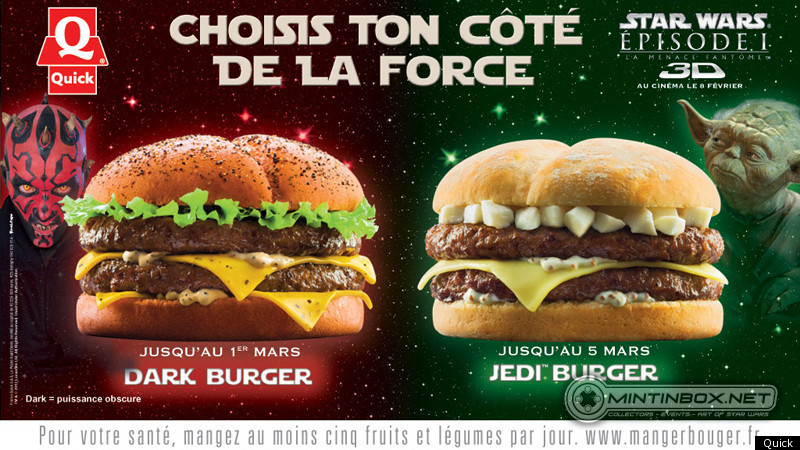 The weirdest of the three by far is the "Dark Vador" burger, which is associated with Darth Vader. It's unclear why its name is misspelled. But even more unclear is the explanation for its pitch-black bun. Yes, we get it: Darth Vader wears all black, just like this burger. What we don't get is how Quick managed to dye wheat flour such a true shade of black. This goes way beyond rye, straight into artificial licorice candy territory. Moreover, who would find such a thing appetizing? See for yourself: 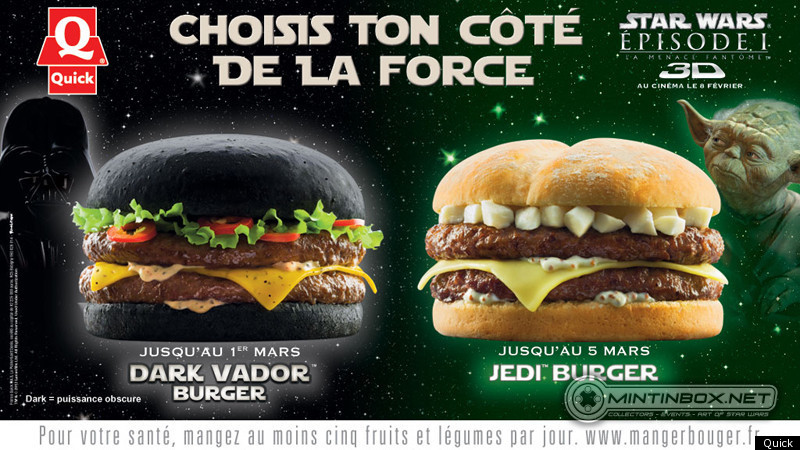 In case you cut even more of your high school French classes than the HuffPost Food editors did and are wondering what the French copy in the ad means, the top asks onlookers to decide which side of The Force they want to align themselves with, while the bottom encourages them to eat more than five servings of fruits and vegetables a day.