It may not get any darker than this.

Scientists at Surrey Nanosystems, a nanotechnology company in the U.K., have developed a new material -- dubbed "Vantablack" -- that just may be the world's darkest material yet. After all, the material absorbs 99.96 percent of light sent its way. 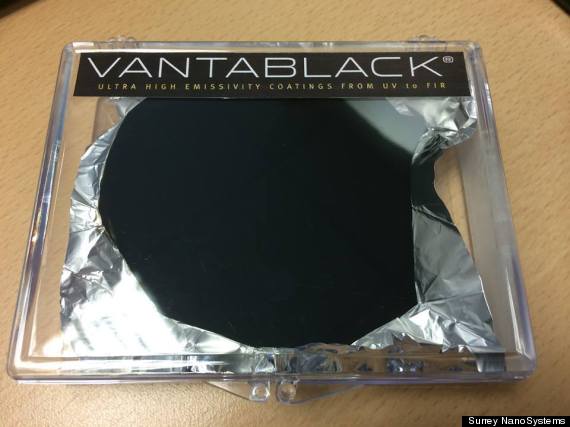 "Vantablack is a major breakthrough by U.K. industry in the application of nanotechnology to optical instrumentation," Ben Jensen, the company's chief technology officer, said in a written statement. "For example, it reduces stray-light, improving the ability of sensitive telescopes to see the faintest stars... Its ultra-low reflectance improves the sensitivity of terrestrial, space and air-borne instrumentation."

So, what is this elusive material anyway? Vantablack is created using super-black low-temperature carbon nanotubes, which Discover magazine describes as one-atom thick sheets of carbon that have been rolled into tubes.

The nanotubes are so tiny, Gizmodo reported, that when light particles are absorbed, they're trapped within the structure without ever bouncing back into the air through the nanotubes.

"These new materials, they are pretty much as black as we can get, almost as close to a black hole as we could imagine," Dr. Stephen Westland, professor of color science and technology at Leeds University in the U.K., who was not involved in Vantablack's development, told The Independent.

Vantablack could be used to boost the performance of astronomical cameras, telescopes, and infrared scanning systems, The Independent reported, and it may also have military applications.

“We are now scaling up production to meet the requirements of our first customers in the defense and space sectors, and have already delivered our first orders," Jensen said in the written statement.