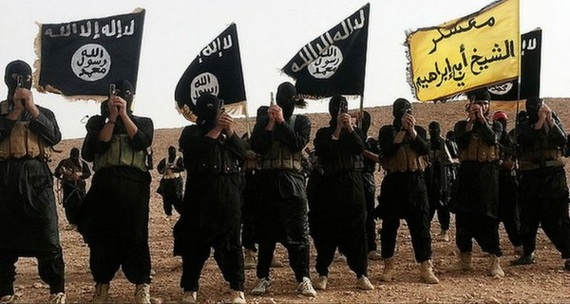 Civilized hearts around the world ache at the darkness that descended on the City of Light last Friday. New barbarians assaulted the Age of Reason and the Enlightenment. As the free world unites in solidarity with the French people, hope glimmers amidst the tragedy, though this hope comes with a note of sober caution.

Dr. Seth Jones with RAND believes ISIL attacked in response to the increasing pressure by coalition military forces on their Salafist caliphate. Iraqi forces supporting the anti-ISIL coalition recaptured Tikrit in April, and recaptured the strategic town of Sinjar just days ago.

The violence in Paris eclipsed the news of the discovery of ISIL atrocities against Arab civilians in Sinjar. But the red tide of violent Salafist extremism is slowly turning as the allied coalition quietly sets the conditions for a future attack to liberate Mosul - the crown jewel in ISIL's unholy "caliphate."

The Iraqi Army, with the autonomous Kurdish Peshmerga, and other irregular forces, continue to gain experience between now and a yet-to-be determined D-Day against Mosul. When that day comes, hard-earned experience will support not only fighting the battle, but keeping the peace when the battle ends.

Though invisible to the casual observer, the discerning eye can see a careful campaign akin to General Ulysses S. Grant's encirclement of Vicksburg in 1863 in the America Civil War. The Iraqi campaign against ISIL, supported by a partnership with the U.S. Central Command, which is under the command of General Lloyd J. Austin, III, are moving methodically to challenge the ISIL hold on Mosul in 2015-2016 as Grant did in eleven distinct battles from 1862-1863.

The bad news, and reason for sober caution over the coming months, is that if increased pressure on ISIL territory and their need to sustain the narrative of victory over "infidels" motivated the attack on Paris, we can expect more efforts to score cheap victory by killing civilians in spectacular suicide attacks. A particularly sobering caution as the holiday season approaches.

Here, ISIL may be following a playbook laid out by al Qaeda and the Taliban. The Pakistani Army launched an offensive in June 2008 against insurgent strongholds and safe-havens in rural Pakistan that are similar to ISIL strongholds in rural Syria and Iraq. Al Qaeda with support from Pakistani supporters attacked the Marriott Hotel in Islamabad in September 2008.

The November 2008 attack in Mumbai followed. Some analysts in Kabul considered whether the attack was a strategic attempt to relieve pressure from the Pakistani Army campaign against insurgent safe-havens.

War, German military theorist Carl von Clausewitz teaches, requires support from the people. Attacks on public transportation in Madrid in 2004 contributed to a Spanish withdraw from the coalition in Iraq. But the Taliban and Jihadists also require popular support. ISIL recruiting benefits from the perverse inspiration their supporters draw from the gladiatorial spectacle and perverse publicity of beheadings, crucifixion, and bloody victories over civilian targets. ISIL's "brand" and "image" suffers when their "team" even seems not to be winning.

Reports alleging an "intelligence failure" in Paris may too easily dismiss the difficulty in providing early warning of small attacks. Strategic intelligence received indications of Pearl Harbor, 9-11 and the Mumbai attacks - but not with sufficient evidence and analytic clarity to issue effective warning. Smaller attacks - like Paris, or Bali in 2002, Madrid in 2004, London in 2005, or Boston in 2013 - are harder to detect in advance. The public hears of intelligence failures, but less often learns of the silent success in preventing attacks.

Organized crime like bank robberies or narcotics trafficking, for example, involve weapons, reconnaissance and planning, but law enforcement rarely catches these criminals in advance. Police need the "intelligence" from evidence developed during investigations.

Policing and prevention is complicated by careful criminals and skilled terrorists who employ counter-measures to avoid leaving evidence, or who provide red-herrings to distract or deceive investigators. Profitable crime like narcotics trafficking, and well-financed terrorists like ISIL benefit from the savvy criminal networks that enlist, bribe or co-opt "insiders" to support their operations.

ISIL counterintelligence, guided by former Iraqi intelligence officers schooled in Saddam Hussein's brutal regime, undoubtedly study reports from friends and foes after attacks, and continuously adapt their methods to deceive, degrade, or defeat allied intelligence collection. This is a shadow war, unseen in the media, between competing intelligence professionals.

In this shadow war, there is reason to be hopeful. The rapid development of friendly intelligence on the attack highlights the deep intelligence sharing and cooperation in Europe that evolved after 9-11. The raids in Brussels show effective intelligence collection, forensic evidence collection, analysis, sharing, and dissemination. The reporting of a free press shows that French and allied intelligence have deep knowledge of the terrorist and criminal networks that threaten peace. The French and other Allied governments are demonstrating a savvy understanding of the need to get ahead of ISIL in the "information" war. This is not a battle to be first with bombast, lies and propaganda, but to be first with the truth.

ISIL seeks to extinguish the culture, reason and freedoms that lights Paris and the free world. They celebrate the death of civilians in the Sinai, in restaurants, soccer stadiums, and nightclubs. They seek a return to the dark ages that thrived before the Enlightenment.

Freedom-loving nations and people must unite to defend against violent religious extremism. Free nations protect the religious freedoms of peaceful worshipers and reject those who corrupt religion's true message of peace and love. As free nations united to defeat political tyranny and oppression in World War II, and defend against armed aggression and subversion in the Cold War, we should once again unite to prevail in an insidious piecemeal war that threatens to impose a religious tyranny on freedom-loving peoples. The war against violent extremism is not over but if freedom loving nation's and peoples of all faiths unite to oppose religiously-based oppression and tyranny, Paris provides hope that we are at a turning point.