The photo, which made the rounds on social media Monday, was a screenshot from an NBC affiliate of 16-year-old Malia Obama leaning against a railing. Some men on Twitter made comments about her shape, despite the fact that she is a minor.

On Instagram, Dockett commented on the photograph posted by user @dreday_4 with the caption, "When is her prom?" Dockett responded and wrote "Omgggg," and then re-posted the photo with the caption "Lmfaooo." 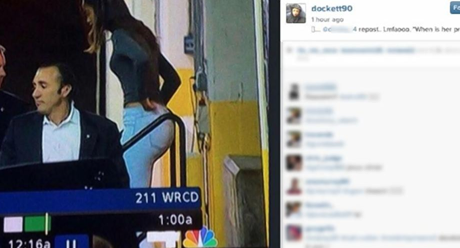 Yall chill I never said anything about the presidents daughter "not one thing" all I did was repost my boy IG pic. Get your facts straight!

And fyi people I do have a daughter so think what yA want! I post what I want ESP if it's funny to me! Seems to me yall need to lighten up.

This is not the first time Dockett has created controversy over his social media posts. Dockett refused to apologize about an Asian joke he made on Twitter last year, took a naked shower on UStream for a $1,000 bet and got into a Twitter spat with former Alabama quarterback Aaron McCarron over a woman who was then his girlfriend and is now his wife.