From its exterior, the house on S. Lewis St. looks innocent enough. Like many in Stillwater, Okla., it is a two-story frame with a welcoming front porch. The entrance is painted orange and black, the school colors of nearby Oklahoma State University.

Built in 1915, it sits on a spacious lot, 7,000 square feet in all, enclosed on two sides by a white picket fence. The fence adds a quaint touch, but at three feet high and shaky in a light wind, it is more form than function.

The students who inhabit the dwelling have a short walk to the Crepe Myrtle Market and Morningside Park, perhaps with a stop along the way for a jolt of Aspen coffee. And the neighborhood is safe, like most places in this college town, but particularly so with the Stillwater Police Department a couple of blocks away.

Yet on December 12, 2010, the inconspicuous house on S. Lewis would become indelibly etched in Stillwater's crime lore as the place where a black OSU basketball star allegedly raped two young white women.

After midnight, as the temperature in Stillwater plummeted to 21 degrees, about 80 party-goers were still celebrating the start of the holiday break -- and an OSU Cowboys victory that evening over Missouri State. Several of the revelers wore Cowboys orange warm-up suits. Among them was Darrell Williams, a native Chicagoan who had won a scholarship to OSU and the starting job as the team's power forward.

What happened around 2 a.m. is hotly disputed. Williams said he left the party and returned home. But that's not what the two women would say. Three days after the party, they told the Stillwater police that Williams had violently thrust his hand inside their pants and penetrated their vaginas, a crime known as rape by instrumentation or second-degree rape. Both women identified Williams from a team photo shown by police.

Brought in for questioning, Williams professed his innocence, saying he may have been mistaken for someone else at the party. Although he passed two lie-detector tests, he was charged with three felony counts of second-degree rape and one felony count of sexual battery.

When Williams flatly rejected a misdemeanor deal for probation, prosecutors brought the case to trial and, in July, a jury with no black members found him guilty of two of the rape counts. On October 12, Judge Phillip Corley will consider defense motions for a new trial. If the judge denies the motions, Williams faces up to 30 years and mandatory registration as a sex offender.

But did he do it?

In previous posts, I wrote about the gaping holes in the prosecution's case, including the lack of physical evidence or witnesses to corroborate the accusers' stories and the discredited method used to identify Williams. I also wrote about Williams' spotless criminal record, his academic success at OSU and his staunch support in the Stillwater community. And, I raised questions about his accusers: One had suffered from a serious psychiatric illness that required hospitalization and had tried to file a bogus police report against her brother; the other had mistaken Williams for a teammate while looking for her purse at the party.

Now it's time to examine the comings and goings at the house on S. Lewis St. -- and assess whether the accusers' stories make sense.

"Beth's" account is the less elaborate of the two. She claimed that Williams fondled her breasts and groin at the entrance to the basement of the house, according to published reports of her testimony. When Beth went outside, Williams caught up with her in the backyard and reached inside her panties. Others in the yard captured the incident on a camera phone, Beth testified, though no such evidence was introduced at the trial.

As for Amy, she testified that Williams was part of a group of men in OSU warm-up suits who fondled her in a separate incident in the basement. As many as 20 other party-goers were in the basement at the time, she testified. When she tried to flee, Williams grabbed her by the arm and led her outside, where he allegedly pinned her against the white picket fence. That is where he used his finger to rape her.

After a struggle at the fence, Williams dragged her against a car, where he violated her again. A party-goer happened by to chat about the basketball game, Amy testified. She used the distraction to break free and run.

So, let's summarize the allegations. In a house packed with college students, Darrell Williams separately chased two women up and down the stairs and out the door, groping them repeatedly, without a single independent witness reporting these offenses. He decided not to commit sex acts in the bedrooms or bathrooms of the house. Rather, he raped both women outside, in the freezing Stillwater night, where he could be seen by passersby -- including cops driving to and from police headquarters less than three blocks away. Miraculously, he did not tear either woman's clothing or inflict scratches and bruises, despite intense struggles between the women and a power forward. 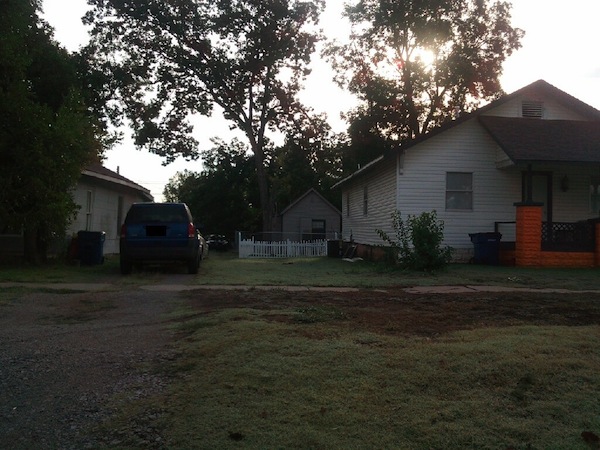 But sometimes the credibility of an allegation boils down to a small detail, and, in this case, it is the item that gives the house its charm -- the white picket fence. To believe the prosecution's case, you must believe that Williams, at 6'8", 255 pounds, "pinned" a woman against a rickety fence less than half his height and more than two feet shorter than she -- without them tumbling into the neighbor's yard.

If only the jurors had been taken to the crime scene, a fairly common practice in "he said/she said" felony cases. They would have seen for themselves the implausibility of Williams' purported movements inside and outside the house. They would have seen the picket fence that even a lame Chihuahua could jump. Instead, they were left with Amy's voice reverberating from the witness stand: "It made me feel violated and sick to my stomach."

The house on S. Lewis recently sported a For Sale sign. The asking price is $102,100, inflated for the neighborhood. If you buy the house -- and the case against Darrell Williams -- we should talk. I have a bridge to sell you.