After watching The Wrestler this weekend, I turned to revisit the cult classic The Pope of Greenwich Village, because I couldn't remember what Mickey Rourke looked like. When that film came out in 1984, he was set to be the king of the 80s. He was tough and natural, sporting high hair and a killer smile. But he had a reputation of being difficult to work with. Then the 90s happened and Rourke left acting to become a professional boxer. This decade has brought him several small parts. When Sin City came out, Hollywood was abuzz that Mickey Rourke was back. But yet, the black-and-white film was so visually skewed that although he was a key character, it failed to give him the spotlight.

Finally, Director Darren Aronofsky has given Mickey Rourke a starring role with his new film, The Wrestler. And while it's hard to see his old visage in this new body, there's no doubt that Rourke is back and in a big way. He's embodied the perfect role of a broken down wrestler, telling Hollywood that he's coming back with a fight.

We spoke to Aronofsky at the 2008 Gotham Independent Film Awards, where his picture was nominated for best picture, about the difficulty of getting the Wrestler made. "Yeah, well no one really wanted to make it. No one believed in Mickey Rourke," he tells us. "No one thought he could be sympathetic, and every single financier on the planet turned it down. And it took about two years to convince someone to do it finally."

Rumors at the time were that the script was out to other actors like Nicolas Cage to get the film financed. But Rourke was already in months of training to beef up, and Aronofsky held true to his guns to stay with him. "You know what, deep down inside we always knew it was the right thing," he says. "And in retrospect it seems completely obvious, but at the time, you're just trying to make the movie. But ultimately I couldn't escape it; it had to be Mickey."

He finally got the green light after lowering his $9 million budget down to $6 million. "And like I usually do," says Aronofsky, "I stuck to my independent craft and tried to figure out what I really, actually, minimally needed, and I did it." 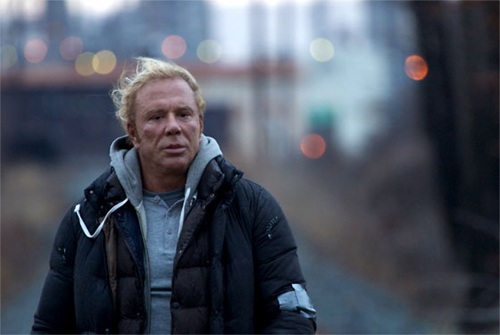 Rourke plays the character of Randy "The Ram" Robinson, a legend in wrestling known for his signature moves, long bleached hair, neon spandex pants, and insanely jacked body. At the height of his career he defeats the champion, the Ayatollah. Twenty years later, Ram spends the weeks carrying boxes at a supermarket, and weekends playing low level wrestling matches that fail to pay his bills. He's aged considerably, sporting a hearing aid, and trying to keep up appearances by bleaching his thinning hair, hitting the tanning salon whenever possible, and spending what little money he has on black market steroids.

He spends his nights at a local strip club, where he falls for the lovely Cassidy, played by Marisa Tomei. His attraction to her is based on their mutual failure, unable to exceed at careers that don't look kindly on you after a certain age. Cassidy's patrons continually dismiss her for younger strippers, and meanwhile the Ram's body continues to fail him in the ring.

After one excruciating match, involving barbed wire and staple guns (for despite the fakeness of pro-wrestling, the extractions of wounds after the matches are very real) the Ram suffers a heart attack. After professing his love to Cassidy, she offers that he reach out to his estranged daughter Stephanie, played by Evan Rachel Wood, who as usual gives a stunning performance.

The Ram is told never to fight again or he may lose his life. When everyone he's close to rejects him, he goes back into the ring one more time to fight the Ayatollah. He's addicted to wrestling and is drawn to the sound of his fans chanting his name as he walks into the ring.

Is the Wrestler the kind of film that makes you feel better about yourself, by watching a man with only one outlet crumble on screen? Or is it a heroic tale of a man who fights all odds to reclaim his one true passion? You're going to have to watch the movie yourself, for the answer lies within Mickey Rourke and the very last scene. 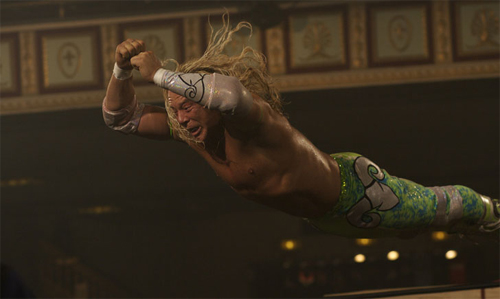