ST. LOUIS, Mo. -- Frustrated with the national coverage of protests surrounding the death of Michael Brown, the unarmed black teen who was fatally shot by a police officer in Ferguson, Missouri, a few dozen people showed up in downtown St. Louis on Sunday afternoon to show solidarity with the officer who killed the 18-year-old.

Since officer Darren Wilson shot Brown on Aug. 9, there have been nightly protests in Ferguson. But the counterprotesters said they wanted the country to know that not everyone supported the Ferguson demonstrations, and wanted Wilson and his family to know that there were people who backed them.

The protesters gathered outside KSDK-TV, a local station that they said has been biased in its coverage of the controversy.

Word of the Wilson rally spread via Facebook, according to the attendees, who were overwhelmingly white. For a $7 donation, there were pro-Wilson T-shirts, and all 55 of them sold out quickly. 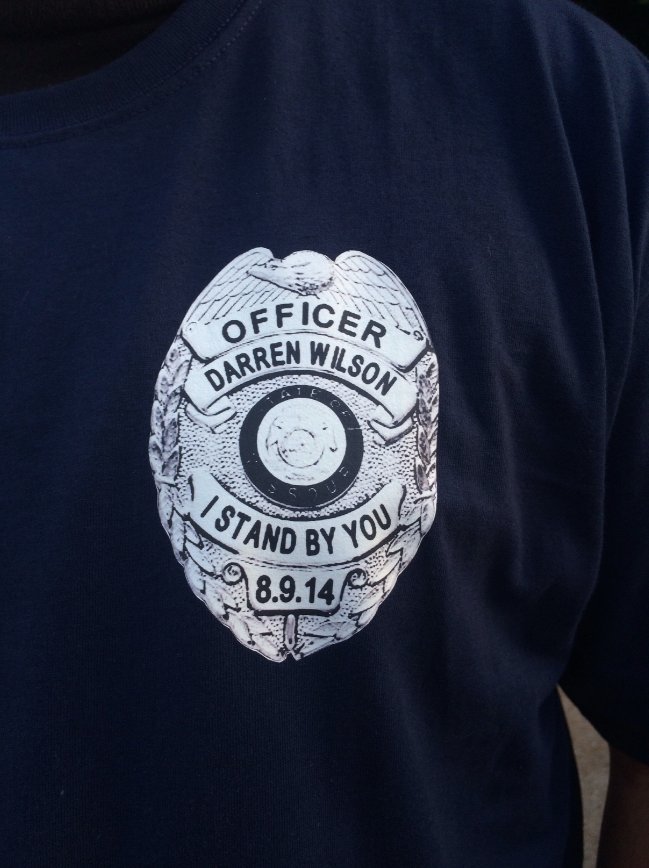 Still, the rally was significantly smaller than the protests around Brown's death. The Wilson supporters said they were worried about the officer's family and for the most part had little sympathy for individuals claiming that there are problems with police behavior in Ferguson.

"If you do what the police tell you do -- if you're not doing anything wrong, and the cops ask you to do something, then you're not going to have nothing to worry about," said Michael Bates, 33.

When asked why the pro-Wilson rally didn't have many African-American attendees, John Newshaw, a retired St. Louis County police officer, said, "This sounds wrong, but I don't think the black community understands the system. Again, there's a process. They're screaming about, why isn't he [Wilson] arrested, why isn't he in jail? Well, without the investigation being done, you can't go and apply for a warrant."

Newshaw criticized the Missouri Highway Patrol for "doing exactly what the violent protesters want" and trying to use more communication and less force.

"They're going to keep pushing the envelope," he said of demonstrators who've gotten violent during protests in Ferguson. "There's no reason to stop. ... It's as simple as training your dog. If you don't tell them stop biting, guess what, he's going to continue to bite."

The Brown killing has touched a chord with many in the African-American community and beyond that goes further than the shooting. Although a majority of Ferguson residents are black, the power structure there is still white. Ferguson's mayor and police chief are both white, as are six of the city's seven council members. (The seventh is Latino.) And just three members of Ferguson's 53-person police force are black. A 2013 report found a major racial disparity in stops and searches in Ferguson, with black individuals twice as likely to get arrested.

But Bates said he was frustrated that the issue was becoming a "race thing," saying that was besides the point.

Asked to interview a woman protestor out here. (Shown in the background.) She identified herself as Darren Wilson. pic.twitter.com/IIEpL5Xv1l

"If everyone just stopped with the racism thing, it'd all just go away and everything would go to court and come out with the way the law is supposed to do it. Rioting and everything in the streets doesn't get anything done," he said.

The Missouri Highway Patrol, which is now in charge of security in Ferguson, declared a second curfew for Sunday night, in effect from midnight until 5:00 am CDT Monday morning. One person was shot and seven people were arrested in the early hours of Sunday morning, while the first curfew was in effect.