ST. LOUIS -- Wearing a Bushnell camo hat, Jeremy Arnold held up a black poster with a single blue line taped across it to show his support for Darren Wilson and other police officers.

As for the man he shot to death? Michael Brown, Arnold said, "got exactly what he deserved."

Arnold said he traveled from Fairview Heights, Illinois, for the Wilson event at Barney's Sports Pub here on Saturday. It was a public unveiling of sorts for the Support Darren Wilson Facebook page, which has garnered thousands of online followers and helped raise more than $200,000 for the Ferguson police officer. Not all of the dozens gathered at the pub shared sentiments as blunt as Arnold's. But they did seem united in the sense that Wilson, not Brown, is the real victim.

Wilson's supporters also agreed that the media is a perpetrator. Between chowing on free hot dogs and drinking beers -- with a DJ playing Journey's "Don't Stop Believin'" adding to the party atmosphere -- few seemed to stop talking about the ways Wilson has been misrepresented and maligned.

"It takes two sides to every story, and I think he has gotten such a bad rap," said Sharon, one of the many people who only offered to give a first name or no name at all.

"Sharon Stone," a friend quipped, before hurriedly leading her away with the admonition that she shouldn't talk to reporters, because they "twist your words around." 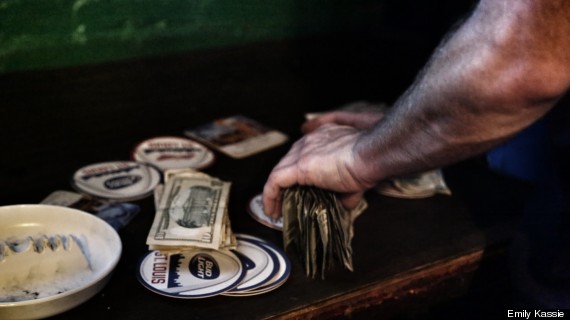 A 12-person grand jury began considering whether to indict Wilson for his role in Brown's death on Wednesday. Some supporters expressed sympathy for Brown's family, but few seemed to think that the dead 18-year-old should be spared the rush to judgment they insist is happening to Officer Wilson.

Sharon said Wilson "looks like a decent guy." Another supporter, Gary Enochs, said Wilson has been "crucified" by the "black community." A third attendee, Michael Smith, said Wilson "was just protecting his life like any of us would do."

There are 12 million arrests per year and only 400 or so police killings, said Enochs. "I would hope that it would be less," he admitted, "but 99.9 percent, that's a pretty good average."

"He had cause for shooting this boy," said Sharon. "Seems like they overlooked the fact that he robbed a convenience store." Ferguson police have identified Brown as the main suspect in a convenience store robbery, but he was shot at least six times before he could be arrested.

Unlike at the Ferguson protests, the only cops in attendance on Saturday seemed to be Wilson supporters. No BearCat armored cars, riot gear or tear gas -- just wrap-around sunglasses and $20, blue Support Darren Wilson T-shirts.

"E," who said she was a Support Darren Wilson Facebook page organizer but would only give a letter to identify herself for fear of her safety, said she expected the rally to raise thousands of dollars. She introduced the gathering by saying that she did not speak on Wilson's behalf.

"E" was elusive about just how closely the Facebook page has been working in concert with Wilson or his family, but she claimed that she was making sure personally that all the money raised at Saturday's event would wind up with them. 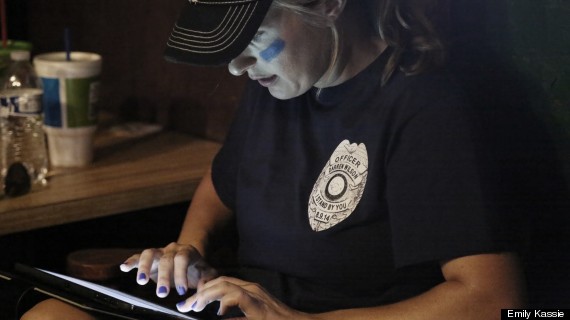 The current GoFundMe campaign for Wilson has raised over $70,000 in the last two days. The money is being collected by "Shield of Hope," a charity that has the same address as the local police union in Missouri, BuzzFeed reported.

There have been three nights of peace in Ferguson since the last skirmish between cops and citizens. But most people who spoke to HuffPost focused more on the looting that occurred in the early days of the protests.

The Wilson rally, said a man named Denny, was "much different" from those in Ferguson. "More calm, more civilized. Nobody's throwing bottles of urine."

If the atmosphere between the camps was different, so was the racial composition. While both black and white protesters have come out every night in Ferguson, no African-Americans appeared to be in attendance at the start of the pro-Wilson gathering.

Supporters insisted that "I don't support a race, I support the truth," as one sign had it. "E" said she deplores the racist messages that have repeatedly appeared on the pro-Wilson Facebook and crowdfunding pages.

"E" said she has black friends who support Wilson, but they can't publicly declare their feelings for fear of angering their family members. Another Wilson supporter, Scott Holtgrieve, was less sure why all the attendees were white.

"That's a good question," he said. "Never really thought about it."

Photography and video by Emily Kassie. 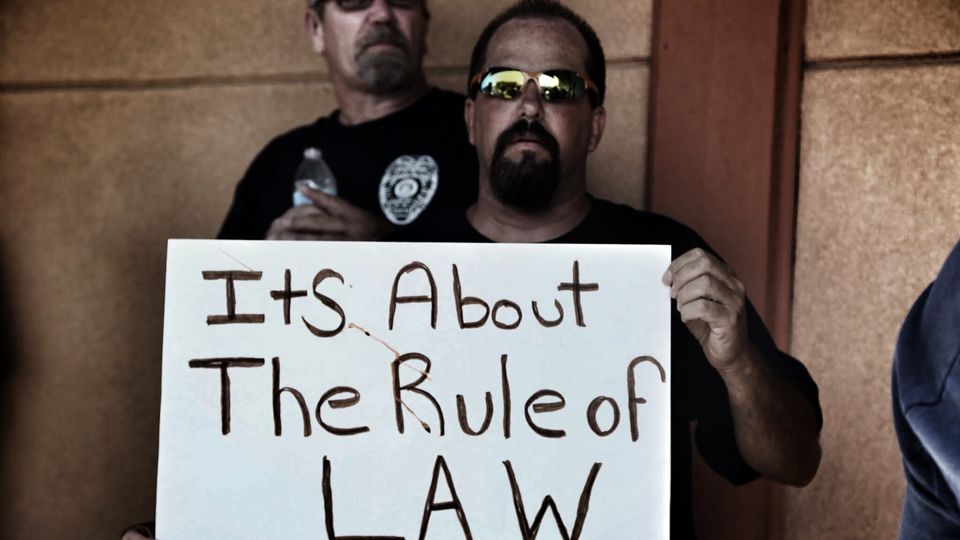