A Kentucky police officer is recovering from non-life-threatening injuries after accidentally shooting himself in the stomach inside an elevator on Friday.

Video from the scene shows officer Darryl Jouett, a 25-year veteran of the Erlanger, Ky., police department, entering an elevator in Cincinnati with his wife, who was not identified. Jouett, who was off-duty and not in uniform, is seen talking to his wife and holding a box in one hand while apparently trying to adjust his pants or shirt.

At one point, Jouett pulls out his police-issued .40-caliber semiautomatic handgun, looks at it then attempts to put it back into his holster.

Jouett fell, and his wife quickly made a phone call and then ran out of the elevator to get help.

He was taken to a local hospital, The Cincinnati Enquirer reported. By Monday, Jouett was recovering at home but told WCPO that he had been instructed not to speak about the shooting.

The Erlanger website says Jouett is the city's code administrator, "responsible for the enforcement of the City's Codes and Ordinances which have been adopted over the years to help protect the health, safety and welfare of the residences." According to his LinkedIn page, Jouett also served six years in the U.S. Air Force as a security police officer. 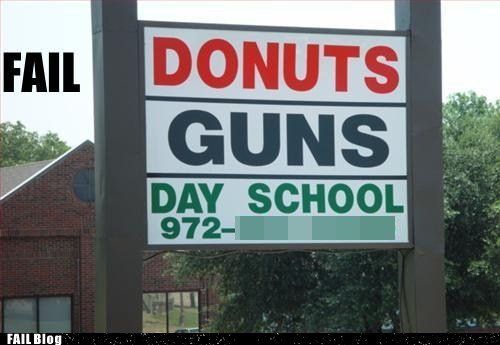 1 / 17
Donuts And Guns
Hopefully both are far away from the day school.
<a href="http://failblog.cheezburger.com/">Failblog</a>