On Thursday, former Dartmouth student Parker Gilbert was cleared of all seven charges of rape leveled against him by a fellow student. I was at work when I heard the news, and I cried.

As a student of Dartmouth, my first reaction was that of incredulity. It was quickly replaced by rage, and then followed by fear. Last spring, Gilbert was accused of entering a fellow student's room and sexually assaulting her while she was still asleep. During the trial, the prosecution claimed Gilbert raped the 19-year-old vaginally, orally, and anally.

I wanted to know how Gilbert, who sent an email to the survivor following the alleged attack apologizing for his behavior, had been found innocent. I wanted to understand how, as the defense claimed, the incident had been nothing more than "clumsy, awkward, drunk college sex."

As a member of Dartmouth's Student and Presidential Committee Against Sexual Assault, I have dedicated much of my Dartmouth career to eliminating cases like these from our campus. And although the decision was not at all doled out by Dartmouth, it still feels like a blow. For every student of Dartmouth, I believe, this is personal.

In the past few weeks, Dartmouth has made tremendous strides in demonstrating that the administration takes sexual assault seriously, proposing for the first time, "mandatory expulsion in cases involving penetration accomplished by force, threat, or purposeful incapacitation." 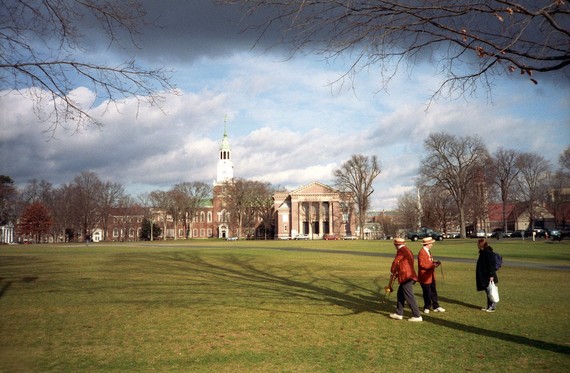 But for some, Thursday's ruling feels like a step in the wrong direction. WISE, a non-profit organization that seeks to empower victims of domestic and sexual violence, released a statement following the decision:

Today's decision in the Dartmouth rape trial of Parker Gilbert is devastating and there is no doubt that it sends a terrible message to survivors of sexual assault. Something has got to change if we can allow a man who has no relationship with the victim to violate her in her own bed and face no consequences.

The decision was indeed "devastating," and in the hours following the decision, I checked Facebook and Twitter to see if I could find any further information. Upon visiting these sites, I was overcome by a very different emotion: pride.

When I logged onto Facebook, I found an incredible outpouring of support and love for the survivor. While there was outrage and disbelief, the majority of posts I read about the incident were words of gratitude, encouragement, and unparalleled kindness. While there were questions about the justness of the justice system, there were no questions about her bravery for reporting her alleged assault. 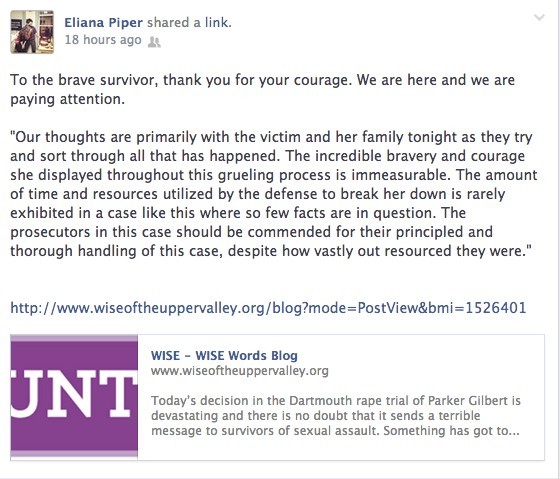 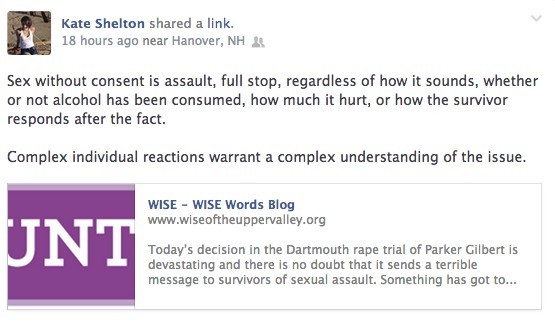 Dartmouth men and women alike took to Facebook and Twitter to proclaim not only their indignation, but, more importantly, their solidarity.

For the first time in a long time, I felt as though there was a very real community at Dartmouth. 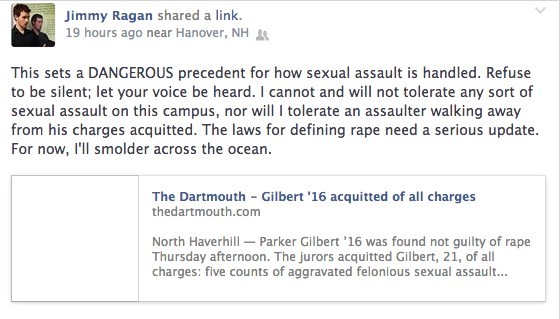 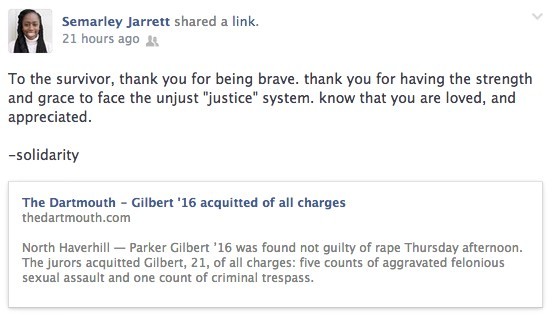 Time and time again, studies have shown that sexual assault goes enormously unreported. In 2013, an estimated 80 percent of assaults were never brought to the attention of law enforcement. Even more troubling is the fact that women in college are at particular risk.

We know that many members of the community have been following the case of the State v. Gilbert with a range of emotions. At this time, we are focused on the well-being of the community and moving forward.

A 2006 study conducted by the Department of Justice found that approximately one in four women had survived either rape or attempted rape during their collegiate careers. A recent article in The Guardian claimed "you are more likely to be sexually assaulted if you attend university than if you do not." This makes instances of reported rape all the more important. 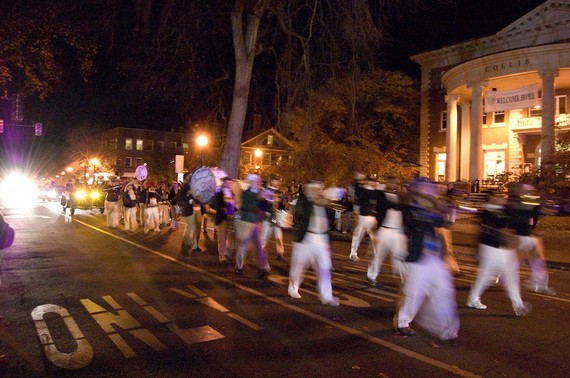 Now, we can and we must do everything to ensure that survivors' stories do not go unnoticed. We are obligated to demonstrate the same level of courage they do in combatting sexual assault. What I saw yesterday from my peers at Dartmouth gave me hope that, together, we can and we will.

We cannot allow Thursday's ruling, as WISE said, to "impact survivors' decisions in reporting their crime." Instead, there must be a culture of vigilance and of support from the brave individuals who come forward with their stories. We have to pay attention.

It's the collective responsibility of a community to keep our men and our women safe. And I truly believe that Dartmouth College is a community that has an incredible capacity to care for one another, if we take the time to not only hear, but to listen to each other. Dartmouth's motto is Vox Clamantis in Deserto, or "a voice crying out in the wilderness." We cannot allow any member of our community to be a lone voice. We are all a part of the same wilderness, and we must stand together.

Can Men Be Feminists? You're Damn Straight, and Dating One is the Best

I Knew From Facebook That He Was in Trouble ... And Did Nothing