Co-authored by Dacher Keltner, a professor of psychology at the University of California, Berkeley

Lisa Feldman Barrett's Feb. 28 New York Times op-ed seeks to undermine the science showing universality in the interpretation of facial expressions. In her eyes, recent evidence "challeng[es] the theory, attributed to Charles Darwin, that facial movements might be evolved behaviors for expressing emotion." Such a disagreement really belongs in exchanges of findings and theory in a scientific journal, evaluated by colleagues as evidence accumulates, not the public press. This is not the first time that Barrett has publicized her views in the press. We didn't respond then, but we feel compelled to do so now so that the public is not misled and is apprised of the broader, Darwin-inspired science of emotional expression that many scientists are working on today.

First, let's get the science right. Darwin never claimed in his great book The Expression of Emotions in Man and Animals (1872) that all facial expressions are universal, only a specific set of expressions that he had observed and studied. Nearly 100 years later Silvan Tomkins helped Ekman and Carrol Izard refine and add to Darwin's list. In the late '60s Izard and Ekman, in separate studies, each showed photographs from Tomkins' own collection to people in various literate cultures, Western and non-Western. They found strong cross-cultural agreement in the labeling of those expressions. Ekman closed the loophole arising from the possibility that observing mass media might account for cross-cultural agreement by studying people in a Stone Age culture in New Guinea who had seen few if any outsiders and no media portrayals of emotion. These preliterate people also recognized the same emotions when shown the Darwin-Tomkins set. The capacity for humans in radically different cultures to label facial expressions with terms from a list of emotion terms has been replicated nearly 200 times.

Another large body of research has established different patterns of physiology -- in bodily changes generated by the activity of the autonomic nervous system (ANS), and in brain activity -- coinciding with the appearance of the Darwin-Tomkins set of facial expressions. Separate, well-replicated studies have also shown that voluntarily generating the Darwin-Tomkins set of facial expressions produced distinct changes in ANS and brain activity! Still other studies have related the Darwin-Tomkins set of expressions to distinct physiological responses, including levels of cortisol, oxytocin, and dopamine, as well as the cytokine response that is part of the immune system. This work, ignored in Barrett's critiques, suggests that facial expressions are informative about not only individuals' feelings but patterns of neurophysiological activation in their bodies. Darwin emphasized the importance of some universal facial expressions in establishing the unity of mankind, challenging the racist assertions of his time that Europeans had descended from a more advanced progenitor than Africans had. Those findings and the conclusion that all human beings have a shared set of facial expressions remains unchallenged.

Take this simple test to learn more about facial expressions of emotion. 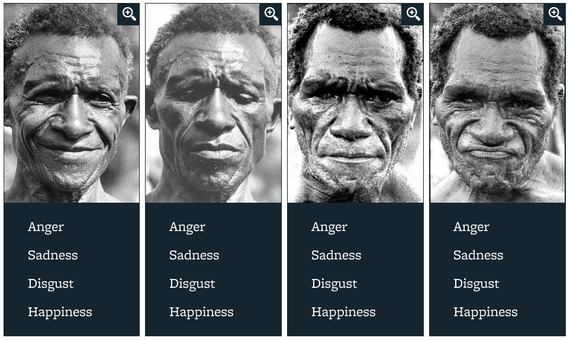