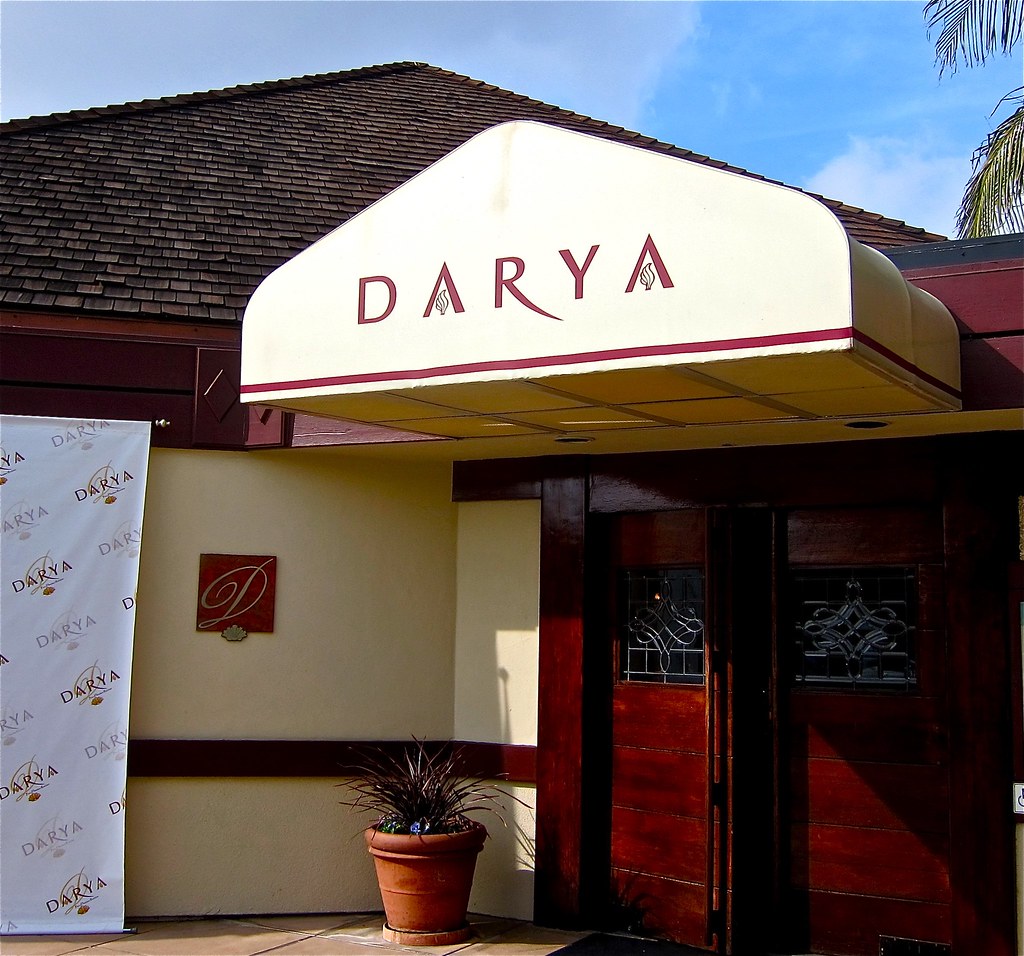 Mention the word "Persian," and I immediately think of the Middle Eastern nation (Iran) of 77 million people, home of the world's oldest civilization and the area's second-largest country. It has been the Islamic Republic of Iran since 1979, alienated from most Western nations, but hopefully now we're on a path to a new era. I once visited its capital, Tehran in the early '70s on Cinerama movie business, and have vivid memories of some of the best food I have ever eaten.

In my home area of West Los Angeles/Beverly Hills, there is a very large population of Persian Iranians, people who came here after the revolution and have established themselves as a powerful faction in the community. I go to a synagogue that is primarily Persian, and even helped vote in a Persian mayor of Beverly Hills, Jimmy Delshad. I relish being invited to dinner at the homes of my Persian friends, for I know I will get a splendid, unique meal of their ethnic specialties. 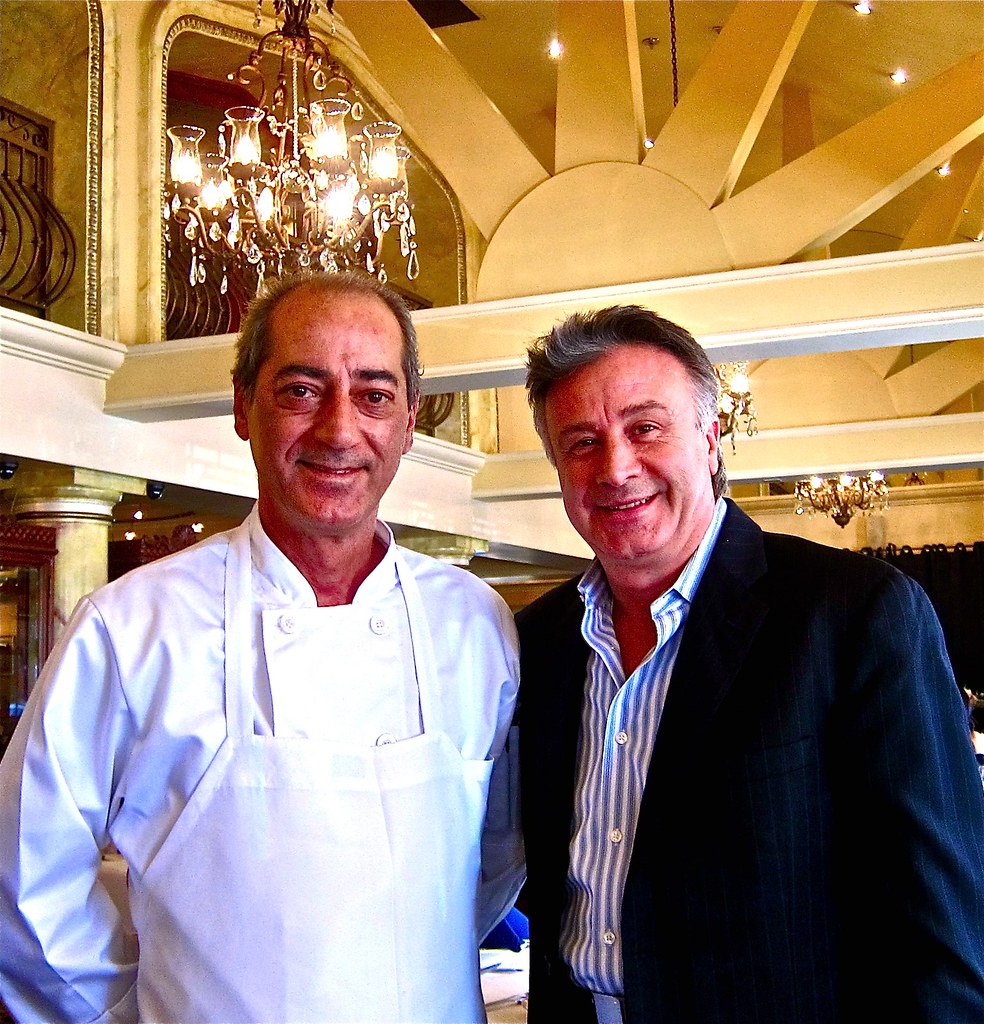 Chef Vahdati and co-owner Ray. All photos by Jay.

All this leads to the fact that my friends at South Coast Plaza mentioned to me that they have had a long-time restaurant there which serves some of the best Persian food in the world. It was confirmed by many of my local friends who often make the trip there. I immediately made plans to dine there for a meal of house specialties, and after this lavish spread, I suspect I will be making the short trip many times in the year 2014.

Darya Fine Persian Cuisine is located at 3800 S. Plaza Dr. Santa Ana, across from South Coast Plaza. I am compelled to describe it as casually elegant, somewhat sophisticated, but very welcoming to anyone who is seeking a terrific dining experience. Darya's owners greeted me heartedly and made me feel comfortable, asking if I had any allergies, to which I gave my usual smart-ass response, "just bad food." Never fear, that is not going to happen here. Ray Esfahanian, Sam Salout and Ali Abedi are the trio who opened the restaurant in 1996 and have built it to the institution it is today, loved by both the Iranian population of Orange Country and locals who appreciate the delicious dishes emanating from its kitchen. Chef Hamid Vahdati came from the Cordon Bleu in Paris ten years ago and has guided the kitchen ever since. I asked Ray what the name meant, and he said it translated as ocean, as well as being a cousin's name. 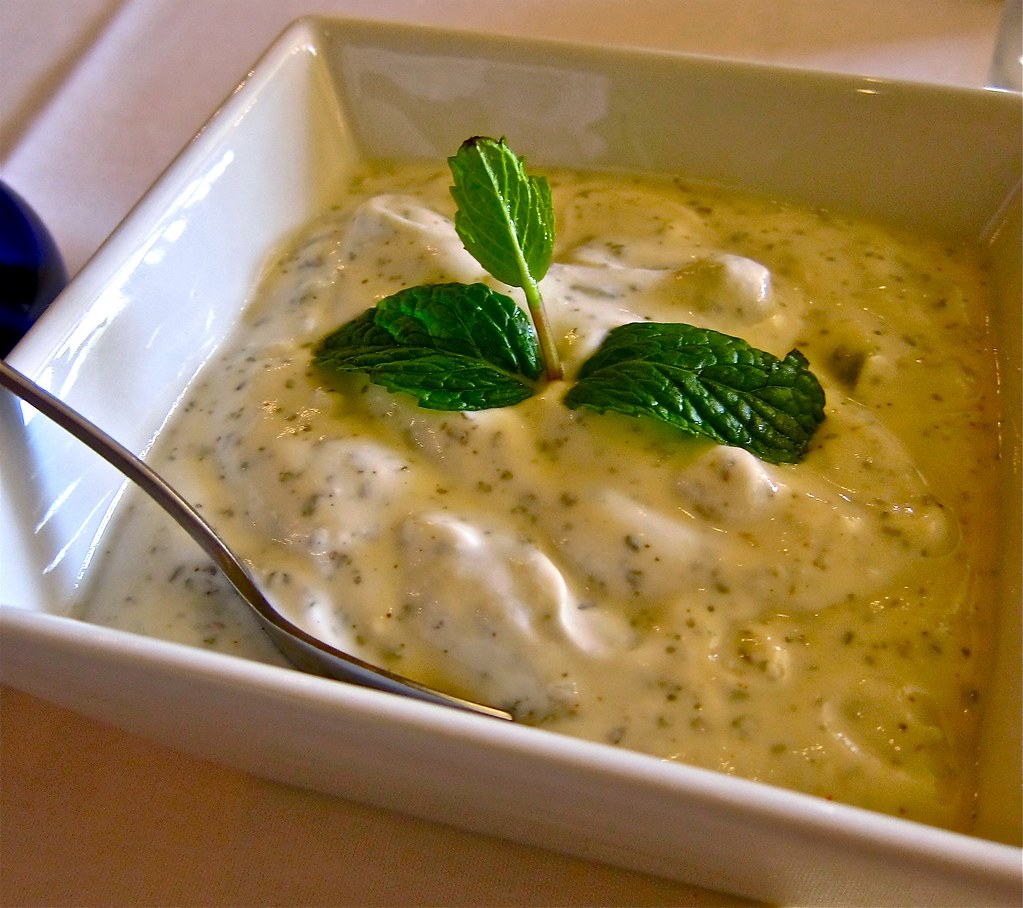 Maust'khiar is yogurt and chopped cucumber flavored with mint. 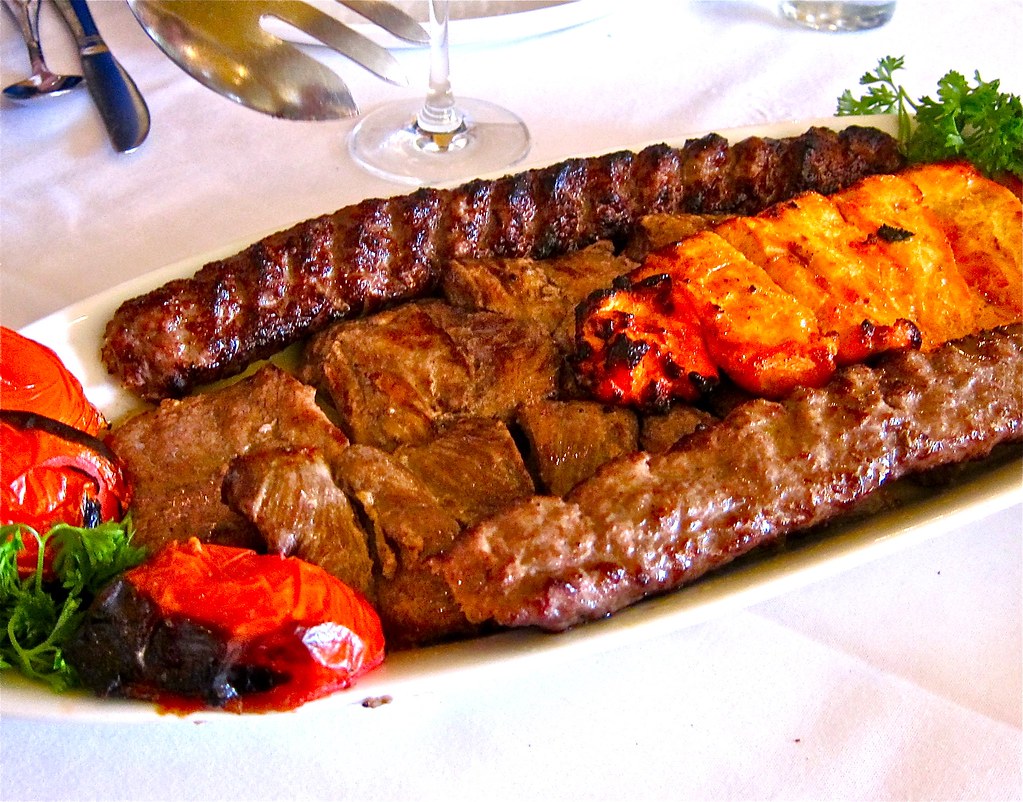 A typical meal here will comprise appetizers, chicken, beef or lamb kebabs, Basmati rice, salads and more. I know that the delicate spicing and intriguing dishes will bring me back time after time. Consider a Maust'khiar appetizer, a combination of yogurt and chopped cucumber flavored with mint. My preference is the Borani appetizer, comprising yogurt, eggplant, onions, garlic and herbs -- so succulent.

My companion at lunch one day chose a dish called Fesenjon, fried walnut pomegranate sauce mixed with boiled chicken served, of course, with a side of Basmati rice. I had the Baghali Polo, which is Basmati rice mixed with dill weed and lima beans, served with fresh seasoned boiled lamb shank -- so delicious it will satisfy even those silly folks who don't like lamb. (I loved the lamb shank so much I ordered another to take home.)

Or you can choose from chicken, seafood, beef or lamb combination platters and vegetarian plates on the dinner menu. I was impressed by the extensive wine list, the surprising dessert choices, and the cool cigar patio where I later enjoy my Padron stogie. The restaurant's attractive marketing coordinator, Arezou Hoomshiarnejad, introduced me to a sensational wine called Persian Tradition Shiraz, a red wine from Paso Robles blended especially to match the deep flavors of the unique cuisine. 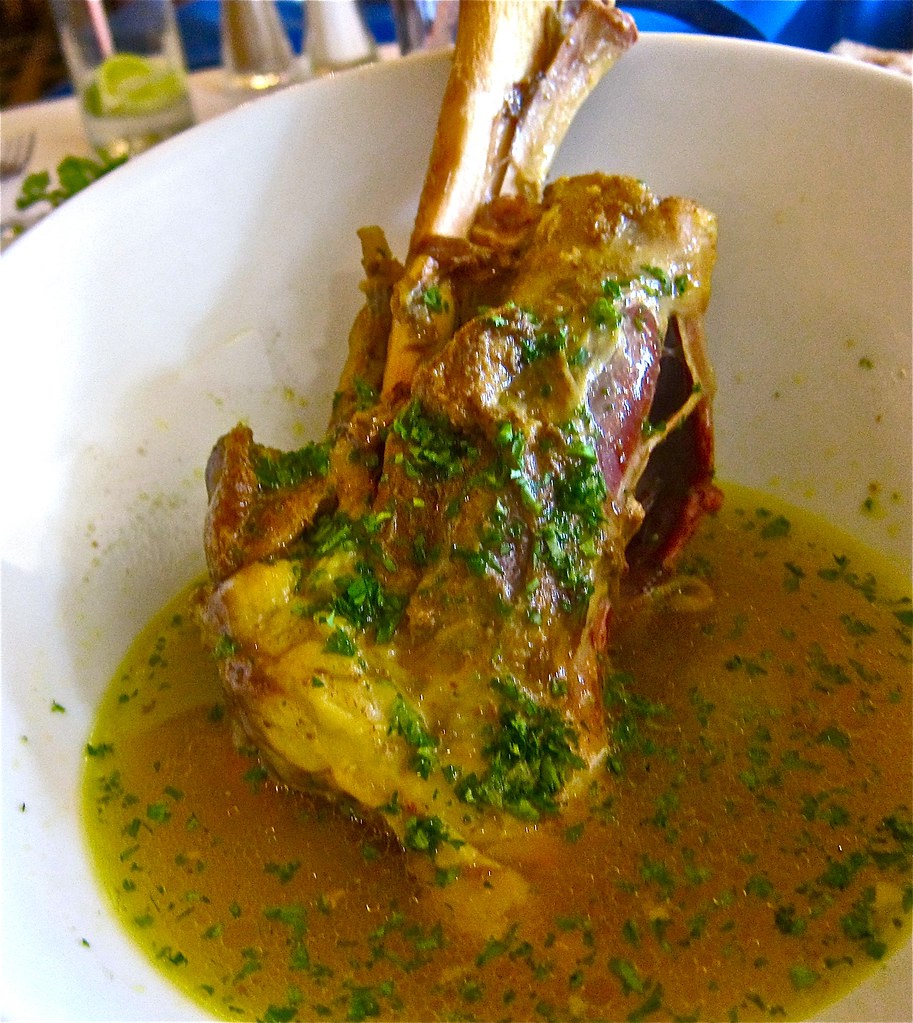 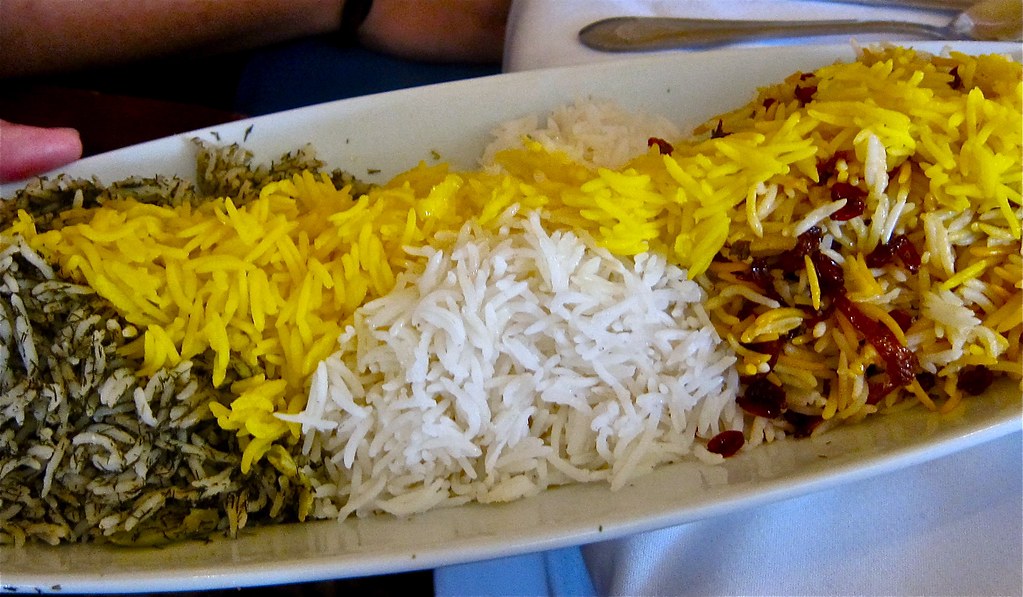 I have been deeply impressed by the palatial dining room with its dozen faux-marble columns and illumination from wonderful crystal chandeliers -- just stunning. Note the magnificent Persian carpets, of course. The professional waiters know how to make the first-time visitor feel comfortable, presenting a selection of flat breads cut into triangles to nibble on as you peruse the menu. On my first visit we were served by a smiling woman, Lollis, who has been a server here for 26 years, which says something about the owners. She explained the appetizers, from the Hummus (pureed garbanzo beans with tahini, $6.95), tabouleh (chopped parsley, onion and tomato, $6.95) to the Persian Salad ($6.95). Yesterday we had an enormous combination platter so my friends could sample the various proteins. Chicken Barg ($19.95), thick strips of juicy marinated charbroiled chicken breast, Chelo Kebabs ($13.95), strips of juicy ground beef and my favorite, Naderi Kebabs ($27.95), chunks of center-cut filet mignon marinated in their special sauce. 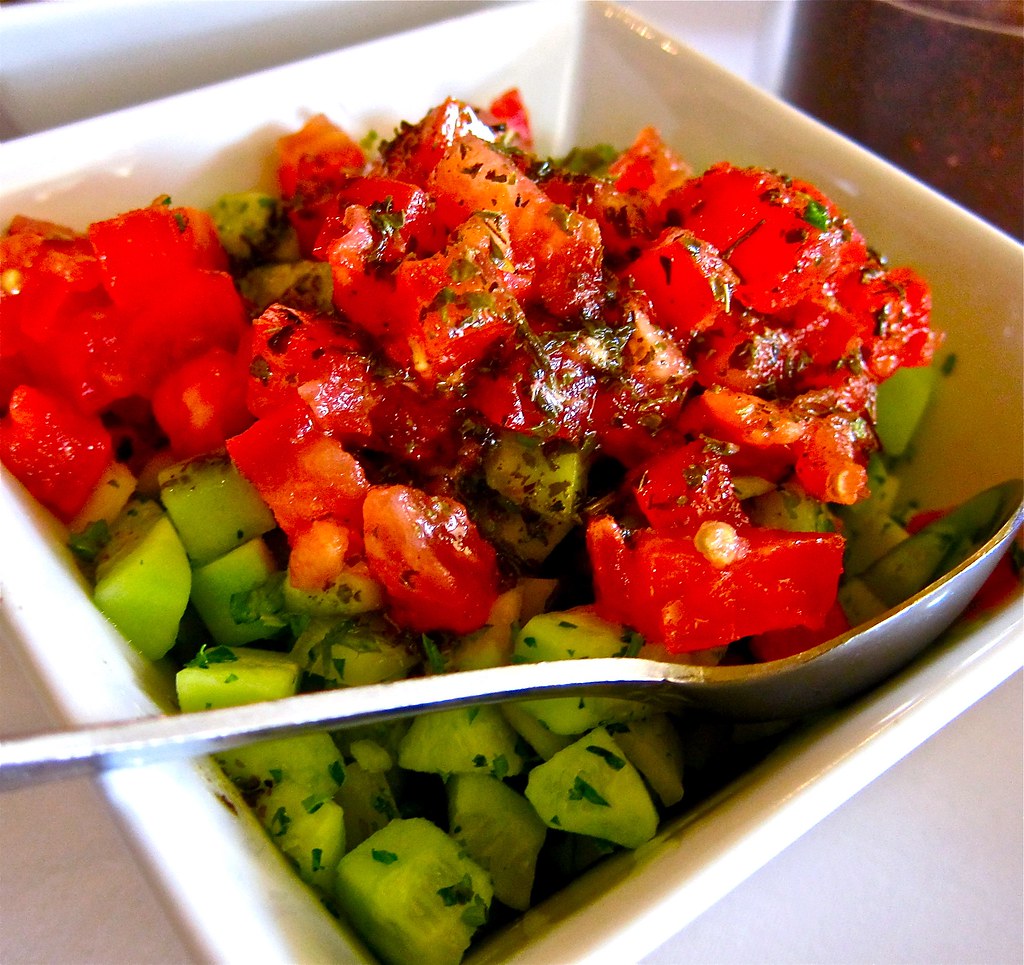 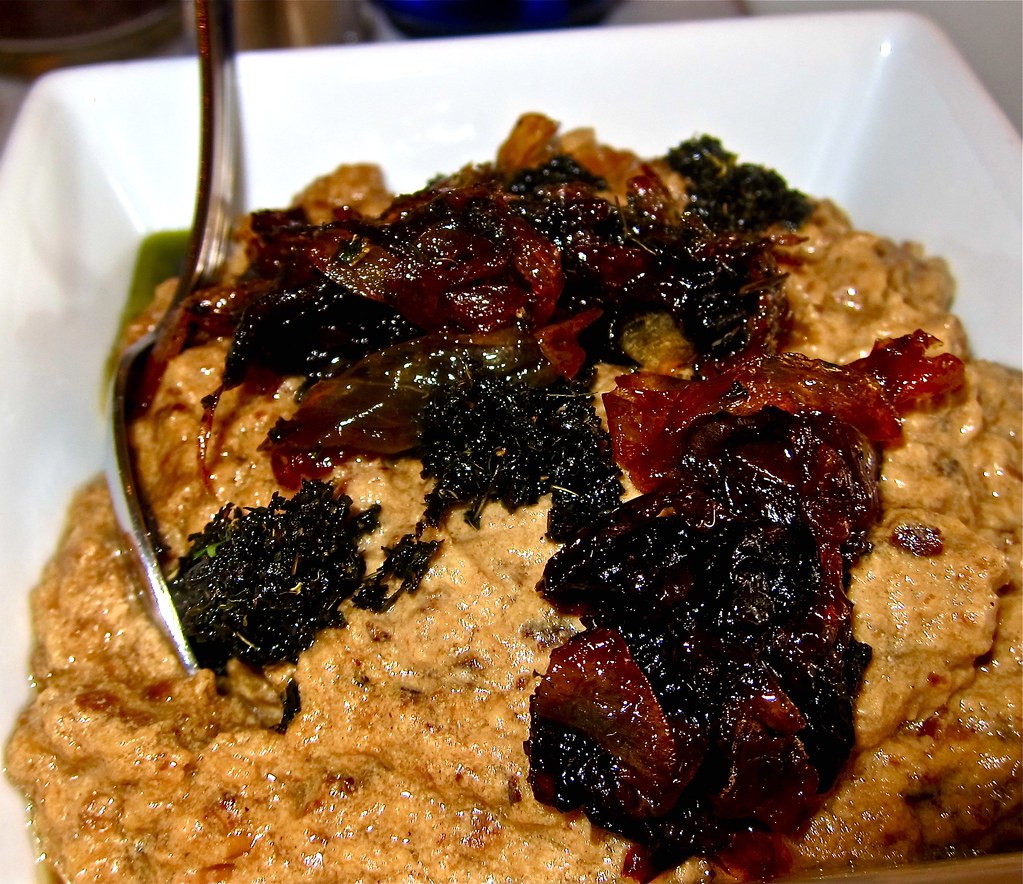 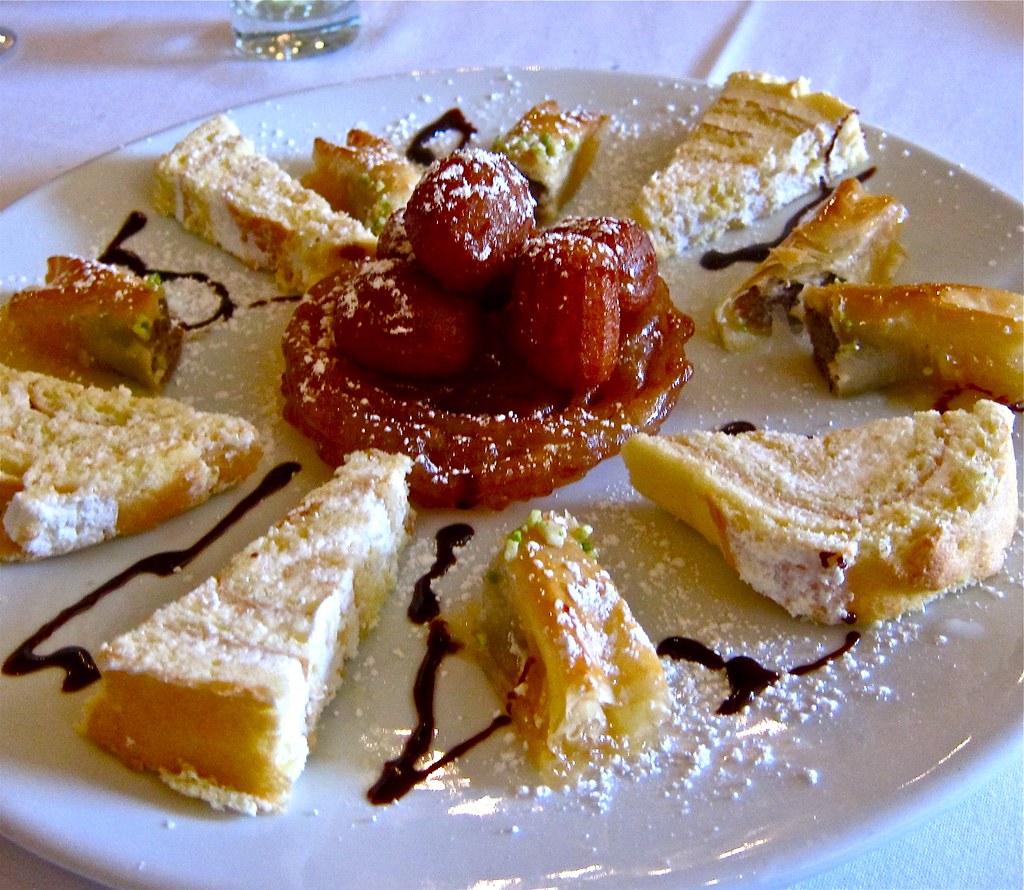 Food just exotic enough to intrigue you, but not different enough to throw you off. For the less adventurous, the Chef's Specials feature more familiar dishes like Tuscan salmon, Roasted Chicken or Seared Filet Mignon. The desserts are all legendary Persian delights: Baklava, Zulbia Bamieh, which is rose-water-infused fried sugar, Roulette, a delicious cake, all luscious.

Yes, this is a three-star experience at incredibly-reasonable prices available every day of the year to those lucky enough or smart enough to take advantage of the many Persian delights on tap at the South Coast Plaza.

To subscribe to Jay Weston's Restaurant Newsletter email him at jayweston@sbcglobal.net.