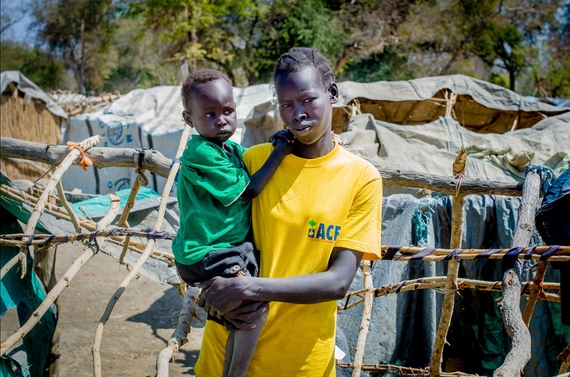 Approximately 25 percent of the population of South Sudan--2.8 million people--are experiencing an acute hunger crisis. More than half of the people in crisis are in conflict zones where humanitarian agencies cannot reach them. In Unity State, the emergency is most severe. Communities ravaged by war have fled their homes, living in swamps with no supplies of food or safe water, unable to meet their basic survival needs. According to warnings released in early February by the Integrated Food Security Phase Classification in South Sudan (IPC), an estimated 40,000 people are now facing "catastrophe. "

What does that mean, exactly? According to the IPC Emergency Review Committee, it means that there is "a potential risk of famine" in Unity State. However, because of intense, ongoing fighting, humanitarian agencies cannot get access to deliver food and water to populations in need. The United Nations and humanitarian partners agree that the situation in Unity is grave--and likely to get worse. But we cannot gather accurate evidence of the risk of famine, or deliver help, without full humanitarian access to areas affected by conflict.

Scott Logue is a technical assessment expert for Action Against Hunger, assigned to crisis zones to collect and validate data from nutrition surveys to determine whether communities are experiencing a large-scale emergency. Scott works as part of the newly founded Technical Rapid Response Team (Tech-RRT) consortium, which is an OFDA-funded partnership among Action Against Hunger USA, Save the Children UK, and International Medical Corps.

As the Tech-RRT's Nutrition Assessment Advisor, Scott was deployed to South Sudan in January of 2016--at the urgent request of Action Against Hunger, and endorsed by the South Sudan Nutrition Information Working Group, a data-focused partnership of humanitarian organizations and government actors focused on addressing malnutrition.

"Since the fighting began in Unity State in April 2015, much of the population has been displaced," Scott says. "Humanitarian actors have not had access to many parts of the state to provide assistance."

The humanitarian community desperately needed data to quantify the emergency in this conflict zone. Reliable data is what triggers--and justifies--the mobilization of additional life-saving, large-scale humanitarian funding and assistance.

Saving lives, one survey at a time

"We must have high quality data on humanitarian needs before we know how to help," says Scott. "It's vital to get that information--and validate it as quickly as possible. The data guides the government and humanitarian agencies on where and what actions need to be taken."

Nine survey teams from Action Against Hunger were deployed to Panyijar County and six teams went to Leer County to screen children for malnutrition and gather data for the South Sudan Nutrition Information Working Group. Each team covered roughly one village per day--intensive, painstaking work often requiring travel by foot to remote, isolated areas. In each randomly selected household, children from 6 to 59 months of age were measured to determine their nutrition status. The team also conducted interviews in each household to obtain information related to health, food security (in Leer only), and mortality (number of deaths per household).

The data collected from Panyijar County was staggering, with levels of Global Acute Malnutrition among children that far exceeded international emergency thresholds. "In my entire career, I have never seen such an alarmingly high prevalence of Global Acute Malnutrition anywhere," says Scott. "The data clearly indicates that in Panyijar, the emergency is quite severe."

Victor Mallelah, Action Against Hunger's Survey Program Manager who led the emergency nutrition surveys in Panyijar and Leer, says, "Through this process, I interacted with and witnessed the needs of the most vulnerable communities in South Sudan." Victor says, "It isn't easy to be a humanitarian worker. But to me, it is a privilege. Many people don't have any place to turn, if not to humanitarian aid. Their expectations--and the sense of responsibility we feel--are huge."

Additional surveys are proposed for highly affected counties in Unity State. Once these surveys are completed and the data is validated, there will be ample evidence to prompt an urgent demand for the levels of funding and assistance needed to mitigate famine and save children's lives in Unity State.

Scott, Victor, the entire Tech Rapid Response Team, Action Against Hunger, and the IPC Global Partners remain committed to ensuring that the crisis in South Sudan is not forgotten--and to collecting the evidence required to mobilize immediate humanitarian assistance where it is so desperately needed.