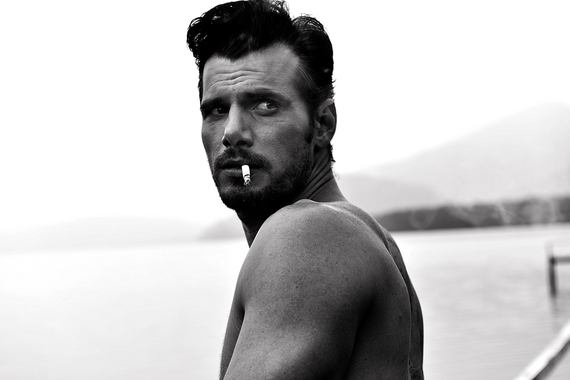 For them and for myself, the thought of committing our whole life to one person can be rather unnerving. Because we are at this point in our life where we are not just looking for love, but something more.

We want somebody whom we can spend the rest of our life with. Someone who is serious and committed. Someone who is willing to go through the thick and the thin with us. Someone to share the burden of bigger adult responsibilities, like having a family or getting a house with.

When you dedicate your life and entire self to something or somebody, it is only natural for you to wish for some returns. Or at least, you hope that things won't backfire and cause you disappointment and hurt.

Well, as much as it's true that you can never be 100% sure about a person, or predict the future, it's not impossible to at least judge whether your significant other is a man ready to give you much more than just love and affection, or if he's still a boy only in for the fun.

A real man knows what he wants in a partner, and once he has found that special someone, he commits himself and his whole life to them. Your happiness becomes his happiness. He stays loyal to you because he understands that one true love is enough for a lifetime.

Some guys would tell you that he loves you, but you could tell from his wandering eyes that he doesn't really mean what he said. The ugly truth is, part of him is still looking for the next best option out there for him.

Granted, it's in our genes to desire multiple mates, just as for other animals. But we humans are also bestowed with the gift of rationality. We can think and plan beyond our primary urges, and sometimes even survival instincts.

A real man is someone who's able to make decisions based on what he thinks is right, instead of what he feels like doing. If 'forever' is what you're looking for, then only a real man who has the self-discipline in him can deliver that promise to you.

2. He is completely honest and open with you.

Some guys face difficulty opening up to their significant other because of the strong, brave, masculine front which they have taken all their life to build and polish.

Indeed, a man's honesty brings out his most vulnerable side. Whether his lover would take that part of him and embrace it or trample on it, he will never know. This is why honesty often takes more than it seems, and only a real man who is humble and sincere has the capacity to offer that to you. Not just because he trusts you, but also because he respects your desire for more of him.

So if you ever find a man who can be honest with you about himself, treasure his openness and trust in you. Never dismiss it as no big deal, because by sharing his everything with you, he's actually making you his big deal.

3. He isn't afraid to apologize for his mistakes.

When a real man realises that he has done something wrong or hurtful to you, he takes responsibility. He doesn't beat around the bush, give excuses, or try to cover it up with more lies. He owns his sh*t. He apologizes and he tries to seek for your forgiveness. Why? Because he puts you first. A man who apologizes is a man who loves you more than he loves his ego.

And if he is truly sorry, he will reflect upon his actions because he doesn't want to hurt you the same way again. And because he wants to be a better man for you.

A real man ain't the jealous type. Or rather, he has grown out of it. He's secure in himself and your love for him. A sense of confidence glows from within him. He isn't untrusting or doubtful in the relationship. He doesn't compare himself to others, or you to others either. Because of this, you are able to feel a sense of stability in the relationship.

In comparison, a man who is insecure with himself often brings along that sense of insecurity into the relationship too. With him, the relationship is filled with unnecessary drama and conflict. Because he is unable to trust you fully, or perhaps, he doesn't even trust himself with loving you.

5. He doesn't need you to change for him.

Personally, I don't believe in changing myself for the other person in the relationship, or waiting for them to change for me. I think sometimes people try too hard to make things work. I had been through that before, and things only got uglier. The motivation to change should come from within yourself, and not because of some pressure from somebody else.

In one of my articles, The Difference Between Needing, Wanting And Loving Somebody, I shared about a friend's experience with her ex-boyfriend who had unreasonably high expectations of her. Because she loved him, she was willing to make changes for him, like going to the gym with him, hanging out with his friends and family more, and etc. She was willing to do so much, so much for him, yet he's always nitpicking. It was as though she would never be good enough for him.

A real man doesn't need you to change for him, because he loves you for who you are, whether at your best or your worst. Because he understands that nobody is perfect -- or rather, it's those imperfections of yours that make you perfect for him.

If there is one thing I look for in love, it's security. Because I understand that there are many things in life that we depend on but can't be 100% sure of -- our job, our health and etc. In view of this, I want a partner whom I know is going to be there for me, in sickness or in health, for better or for worse. Because that's what I'm gonna give him in the relationship too.

7. He's ready to fight for a future with you.

A real man is independent and comfortable with living on his own. He is OK with leaving his family, the home he grew up in -- his comfort zone -- to go out into the world with you, wherever. Because he is ready for a new chapter in his life, and he wants you and your goals in it too.

The opposite of a real man is someone who is constantly dependent on others when he's making decisions about his life. Ever dated a mama's boy? If he's not even OK with planning his own life and future, what makes you think he's ready for yours? And if he doesn't even know what he wants in his life, don't expect him to fight for what you want, whether in the face of parental objection, financial difficulty or other trials in life.

8. He makes you a better version of yourself.

I believe every relationship in life should be edifying. They should help you be better, and achieve more than what you could on your own. Because love is not selfish. When you truly love somebody, you want to help them be greater, even if that means that they might overshadow you one day.

A real man isn't afraid to let you outshine him. Because to him, you're already his biggest trophy in life, and you're meant to shine. He'd rather show you off to other people, than to make it all about him and his achievements. And whether in the end you succeed or fail, you can always count on him as your biggest fan, still cheering you on.

Because of his love and enthusiasm, you push on further. You are no longer afraid of falling short. Because you know that he believes in you. And because he makes you believe in yourself even more.

Read more of Keay Nigel's ramblings on love, sex and relationship on Medium.

Write to him at nigel@loveiscollective.com.

Or ask him anything and everything on ask.fm/KeayNigel.