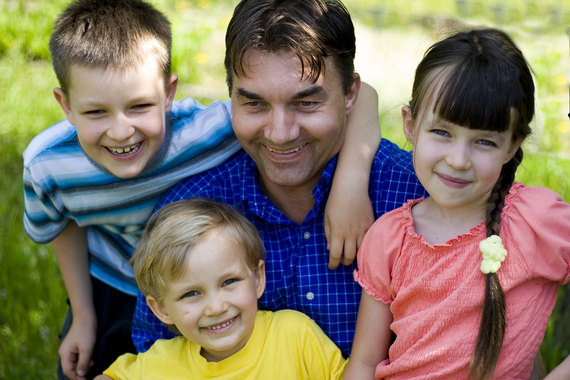 You're ready for a committed relationship, maybe marriage. Maybe you've already met a fabulous guy. He's everything you've always wanted in a partner: kind, loyal, sexy and smart. Oh, and he has kids. Now maybe you have kids and maybe you don't. If you do, you're a little ahead of the game because most parents understand the unconditional love and responsibilities they have for their kids. But it still won't make it easy. If you don't have kids, you may be a little more challenged but that's okay if you are willing to explore these 6 things you MUST find about:

1. Find out how long your guy has been divorced and how he feels about it.

Divorce is a type of death and requires a process of grief, even when one may have desperately wanted the divorce. When there are kids involved, it's a major loss for them. The process of grief is not a brief one. How well has your guy worked through his divorce?

Most men live with guilt post-divorce, even when a divorce is more than warranted. They feel especially powerless and shameful if the mother of their children turned out to be not such a great mother.

How well has your guy worked through the angst of his marriage ending? Has he truly moved on? Is he ready for another committed relationship? Explore these questions early in the relationship.

BTW, if he's separated versus divorced, consider that a red flag. There's a reason for the expression, "Fools rush in where angels fear to tread."

2. Find out what his relationship is to his ex.

This is critical. If he has a hostile relationship with his ex, you can expect a lot more complications than what will already naturally exist when dating or living with a guy who has kids. Hostile ex-wives tend to extend their bitterness to the new woman in her ex's life. Some will try to alienate their children from their father as well as his new partner. Privacy in the home becomes difficult because angry mothers tend to interrogate their children when they return home from Dad's house. Some love to file court hearings at the drop of a hat and there is the potential for you, if you are living or ultimately married to him, to be pulled into these post-marital dramas.

If he has a friendly relationship with his ex, how friendly is it? Some men feel pulled between their ex and their new partner. Find out where you stand in this picture.

3. Find out what his boundaries are with his ex.

Many of you may have found out the hard way that your new love had lousy boundaries with his ex. The ex dropped by, came into the home and maybe even had a key! There were texts, emails and phone calls on a constant basis.

Your new guy may be constantly complaining to you about his ex and before you know it, you are both caught up in the drama of continually talking about her latest antics. This is not a topic that you want to be the thing that binds you.

Healthy boundaries must be established to preserve the privacy and sanity of you both as the new couple. This is not to suggest that friendship between exes isn't a good thing. It's great for them to get along but things have to change when another person enters the picture.

Boundaries must be created to prevent unwanted intrusions. Your guy must make it clear to his ex about how much communication is needed and to emphasize that it needs to be focused on the kids.

4. Find out what his expectations are when it comes to your role with his children.

It's not uncommon for divorced men, especially if they think their ex is a less-than-adequate mother, to want you to come in and fill a "mommy hole" for his children. Men may not consciously realize this, but most divorced men I work with will admit to wanting their new partner to be a bit like Mother Teresa and Mary Poppins combined. Your guy loves you, thinks your terrific, and may want you to sprinkle your magic fairy dust around and help him clean up any mess left over from his previous marriage and divorce.

This is a big time set up! There is no such thing as a "bonus mom" unless the kids themselves decide to see you that way and the majority of them won't. "You are not my mother" is not only a declaration made by kids, it's the truth.

You would be wise to make it clear that you have no intentions of trying to buck nature (blood is thicker than water) and are more than willing to treat his children in kind and loving ways and support him in his role as a parent.

5. Find out how his children feel.

Know that his children will most likely take a long time to accept you.

"Our love will conquer all" is a statement I've heard frequently by couples when they're in the throes of passion and phermones. Fantasies of "The Brady Brunch" and a "blended" family are attached to, despite the fact that neither one of these are realistic for most.

It's not uncommon for children to love their father's girlfriend but as soon as Dad and girlfriend say, "I do", their feelings change drastically, often times confusing even them.

Soon, couples come into my office saying, "We never knew it would be this hard." Yeah, it's hard. Really hard. 62-74% of remarriages with children end up in divorce. Take heart. This number can be reduced by getting rid of unrealistic expectations and being prepared for the difficulties that will naturally present themselves.

Those of us who specialize in working with stepfamilies advise a role more like an Aunt or an adult ally (not a friend). The truth is a large number of young adult stepchildren who've had a stepmother for years report not feeling close to them. This isn't because the majority of stepmothers are evil; it's because children have strong loyalty binds to their Mothers.

Know that there will be grief for you too.

Maybe you found his children adorable and lovable, but as time went on, they turned against you, resisted and even ignored you. This sucks! Women partnered with men who have children have a higher incidence of depression vs. biological mothers. It will take a thick skin on your part and support from your partner to endure these kind of natural resistances.

If you marry, you won't be the "first" wife.

If you have children, they won't be his "first" children.

These are things many don't think about when dating and getting serious with a guy who has kids. Women will berate themselves for these natural feelings of sadness and even jealousy. They shouldn't. These are legitimate losses to grieve. Also keep in mind, he will still have many "firsts" with you.

Does all this mean you shouldn't date, live with or marry a guy with kids?

No, that wouldn't be realistic for many of you. Finding out these 6 things will increase your likelihood of a successful relationship. There are happy stepcouples and stepkids! It's just this simple: Knowledge is power, having your eyes wide open is wisdom, letting go of unrealistic expectations and knowing what you may have ahead of you is liberating.

Don't let those phermones talk you out of finding out early on about the critical things you need to know, must know, when dating a man with children.