I recently read a Facebook status update from an acquaintance that stated, "I don't understand why lesbians date women who look like men. If you're into chicks that look like dudes, just get with a dude." I was not only surprised that this status post was written by a self-identified lesbian, but also that most of the comments under the status lauded her assertion that lesbians should only date women who are feminine. My acquaintance's sentiment is shared by many and, as a feminine lesbian whose fiancé falls more on the androgynous side of the feminine-masculine spectrum, I'm often asked point blank why I just don't date men. However, I've only been asked about my preference for androgynous women by heterosexuals and gay men, never by another lesbian. It's not that I think that lesbians are immune to adopting such archaic views, but I usually hear the opposite from them: that they think femme/femme and butch/butch relationships are "unnatural." Irrespective of who holds these views, both of these perspectives tend to be casually stated as matter-of-fact without giving any thought to how they might be rooted in the misogynous, gender-normative, and heterosexist values so deeply ingrained in our society.

Author Kristin Russo recently compiled a clever list of "13 Things Not to Say to Your Lesbian Friend" for Cosmopolitan magazine's website. Coming in at number 11 was "But if you like girls that look like boys... why don't you want to date boys?" Russo's response: "I don't know. If you like boys so much, why don't you want to date my girlfriend who 'looks like a boy'? Case dismissed, overruled, approach the bench, goodnight." Her snarky comeback is quick shade to throw at someone who is not well versed in, or may not even be able to begin to comprehend, the intricacies of sex (terminology used to categorize biological differences) and gender (standards created by society about the ways in which men and women are supposed to look and behave).

This may come as shocking news to some people, but it is a completely arbitrary, socially constructed standard that men should wear bow-ties and women should wear pearls, and not vice versa. Moreover, rules about how men and women should dress and behave are constantly changing, further evincing that these constructs are subjective. It was once considered "unladylike" for "real women" (belonging to certain classes and racial groups) to do "manly" things, such as work outside the home and wear pants. (Some sources report that Vogue magazine did not feature a woman in pants until 1939.) Today, women are working outside of the home and continuing to make progress towards securing jobs traditionally held by men. Additionally, there are plenty of feminine presenting women who wear jeans and/or pants on a regular basis. The power-pantsuit wearing senators and CEOs of today are not thought of as trying to "be like boys" because society has expanded its definition of what it means to be a woman.

There is a common misconception that all self-identified women, regardless of sexual orientation, who fall on the androgynous or masculine side of the gender spectrum present the way that they do in an attempt to "be men." (I emphasize regardless of sexual orientation because people also often conflate sexual orientation with gender expression. There are androgynous and masculine presenting women, such as model Elliot Sailors, who identify as straight.) However, the reality is that none of the women I have dated have ever wanted to be a man, nor did I ever want them to be men. They were just being true to themselves and recognize that there is more than just one way of being a woman, similar to the trailblazers who dared to pave the way for us to become attorneys and wear slacks in the face of being told that these behaviors were reserved for boys.

When I asked butch-identified Nuyorican writer, poet and filmmaker Gabrielle Rivera to comment on her experiences with people assuming that she wants to "be a man" because of the way she dresses, she stated:

Never for one second while wearing men's clothing or any other type of clothing, do I feel like I want to be a man. There is nothing about becoming a heterosexual man that is in any way appealing to me. I wear 'men's clothing' because I like the aesthetic. I feel sexier in a button-down and a bow-tie than I ever have in a dress. I am drawn to men's clothing because it allows me to be in control of how my body and person are perceived. In men's clothing, no one has visual ownership of my curves, breasts, behind, or any other part of my body. (Why do we have to gender items of clothing so hard anyway?) Like calm down everyone, the world isn't going to spin out of the galaxy. They're just clothes.

Brooklyn-based butch Susan Herr, founder of dapperQ, a fashion and empowerment website for the unconventionally masculine, expanded on this stating that her spoken word piece "The Butches Conceit" is a response to being questioned about her appearance and "speaks to the fundamental attractiveness of being authentic."

In her article "My Gender Is Not Yours to Decide," LK Weiss, founder of the Maine fashion blog Jack Tar 207, writes:

What makes a men's shirt a men's shirt and not a women's shirt? What exactly is the difference? If it's the cut, shouldn't I shop for what cut fits my body best? So if I choose a shirt that's cut to fit my body best, and it happens to be from the J. Crew men's department, does that mean I'm trying to make the world believe I'm a man? No. It means I choose to wear clothing that fits my body the way I was born. What makes a tie or a bowtie 'men's'? Is it because historically they were only worn by men? Historically we also wore wool bathing suits! Historically doesn't matter anymore. Ties don't belong to men. Ties are an accessory--just like a scarf, watch or belt--that don't have a gender. Once you de-gender-ize clothing, all you see is a person.

Writer Lindy West put it best in her post "Fierce Women's Judo Competitors Offend One Man's Delicate Sensibilities": "To be clear: Anything on earth that a woman is capable of doing is womanly. It is impossible for a woman to be unwomanly because a woman is a woman. Therefore, anything a woman does is womanly by default."

I just happen to be attracted to a woman who can fearlessly walk out of the house without a drop of makeup, who looks spectacular with short hair, and who has a seductive silhouette in a masculine blazer. In no way does this alone make me sexually interested in men or mean that I should be. I am still a lesbian. Although men can look sharp in suits, which are just made of fabric after all, as a lesbian, I find them to be sexier on women.

Dating Masculine Women Is Not the Same as Dating Men
Stylish Women in &#039;Masculine&#039; Attire 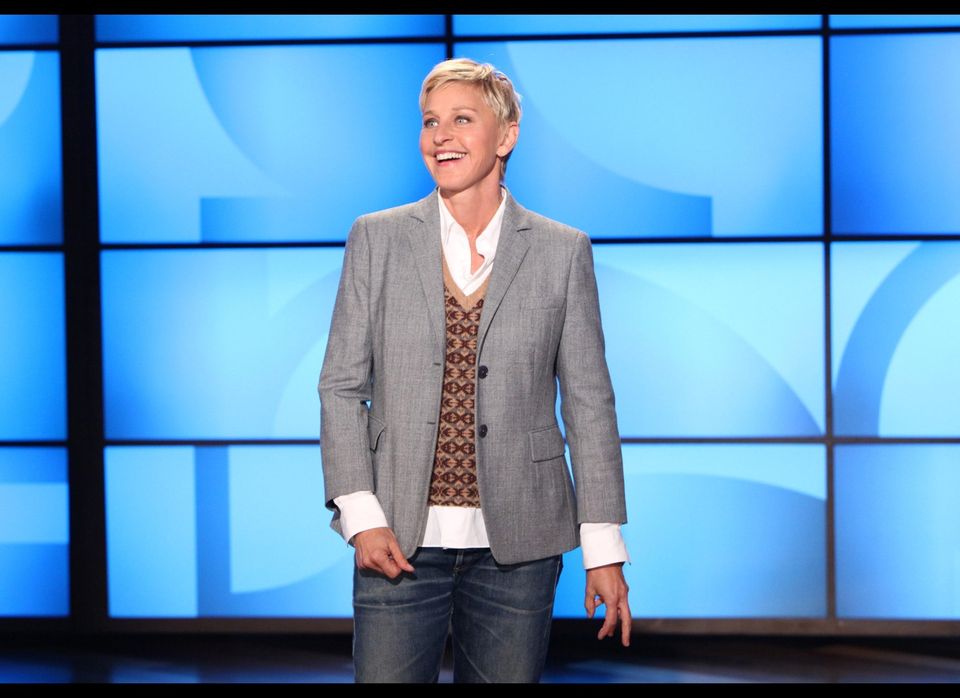